…WHY GOVERNMENT FAILS– BUT INDIVIDUALS SUCCEED. 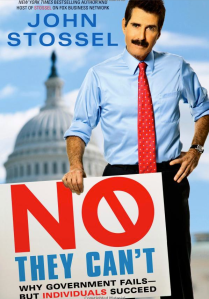 This is libertarian John Stossel’s retort to the big government political slogan “Yes We Can”.  It is his latest book for individual freedom of choice and against overbearing government.  Stossel was a consumer reporter on ABC network and its 20/20 investigative show for a couple of decades.  Since becoming more conservative and sanely libertarian he has been on the Fox News network and has his own show on Fox Business Network.

Although a libertarian in the Ron Paul vein, supporting legalization of drugs and prostitution and less military intervention overseas (not that there’s anything wrong with that), he is always open to debate.  I thought the book might be rehashed scripts of his TV shows but I have found it to be a fresh, reasoned discussion even if the topics are similar.

A few lines at the end of Chp. 1 ‘Fixing’ The Economy summarized that portion nicely:

“Bureaucracies have no bottom line, no market prices for there “output”, fewer rewards for excellence.  What they have is an incentive to keep their heads down and to spend all the money budgeted (or lose it next year).”

“It is absurd to think the humongous constellation of federal bureaucracies is going to identify and root out “waste” in any significant way.  …No one spends other people’s money as carefully as he spends his own.”

“You can’t change those incentives by electing a different president or a different Congress.  The only way to do it is to switch from the noncompetitive, parasitic incentive structure of politics to the competitive, efficiency-seeking incentives of the free market.  Good government has to mean less government.” (p. 44-45)

I’m not planning to comment on every chapter but Chp. 2 Making Life Fair intrigues me.  I’ve been wanting to know for some time just who are the Fairness Police?  I’ve always heard ‘life isn’t fair’.  I’ve also never heard so much about income equality, even to the point that it is statistically measured in depth in government reports.  Since when is everyone supposed to make the same income?  Yes, corporate CEOs are chastised for making phenomenal sums but no one disparages professional athletes, movies stars, or singers for doing the same.  Is that ‘fair’?  I admire people who make substantial incomes but I’m not jealous or envious.  I never felt such people has ever deprived me of one cent of my income because of their income.  But I digress.

“As Aristotle noted, “That which is common to the greatest number has the least care bestowed upon it.”

“If individuals can take from a common pot regardless of how much they put in, then each person has an incentive to be a “free rider”–to do as little as possible and take as much as possible because what one fails to take will be taken by someone else.  Soon the pot is empty.”

What private property does… is connect effort to reward, creating an incentive for people to produce.  Then, when there’s a free market, people trade their surpluses to others for thing they lack.  Mutual voluntary exchange for mutual benefit makes the community richer.” (p. 55)

Sounds fair to me.

Throughout the book Stossel heads subsections with a format “What Intuition Tempts Us To Believe:” (statement) “What Reality Taught Me:” (response).

For example:
“What Intuition Tempts Us To Believe:”
If we want nice public spaces, government must create them.
“What Reality Taught Me:”
The nicest public spaces escaped government control. (p. 56.)

He will then expound upon the issue, sometimes specifically, as in the previous subsection citing Manhattan’s Bryant Park cleaned up by private efforts, other times generalizing.

Chp. 5 Fixing Health Care made me think about some issues.  When we have insurance we pay little attention to the price of things.  We pay for the coverage and can generally get as much treatment as we want within the contractual confines.  We don’t bargain, negotiate, or shop around for the least expensive of any particular procedure, even a common blood test.  We usually make a co-pay and that’s it.  We may get a statement from the insurance company saying how much the doctor billed them and how much they actually paid based on their contractual agreement with the doctor.  It’s always less than the doctor billed, but if I paid the doctor cash I would probably pay the full amount.  I’ve had some hospital surgeries in which the hospital portion of the bill was say $30,000 but the insurance company only paid$5-6000.  What’s up with that?  Who over billed or who under paid?  (OMG I am straying again from just a review, but he has made me THINK!)

Stossel contends that we may be OVER insured.  Many of us might be better off having a high deductible insurance for major illness or injury and paying cash for the small things. As I look back on the phenomenal sums I and my employer paid throughout my career we  might have been better off paying cash, though despite some injuries I have avoided all but a few major health problems.  I was fortunate.  Wouldn’t it be nice if part of your health insurance premiums were like a savings account where you could get a refund at the end of 20-40 years if you stayed healthy.  What about that for incentive?

Thoughts from Stossel in Chp. 5:

“One of America’s biggest health-care problems is not that 48 million people lack insurance–it’s that 250 million Americans have too much of it.” (p. 121.)

“Because employers pay most of the bills [employer-based health insurance], the patient doesn’t shop for insurance.  Because the patient has insurance he doesn’t care what services cost.  Because he doesn’t care and doesn’t shop around, the cost of care goes up and up.”
“Third-party payment destroys the shopping process that is the essence of a market.”
“What holds costs down is patients acting like consumers, looking out for ourselves in a competitive market.  Then providers, even insurance companies, fight to win business by keeping costs down.”
(p. 123.)

He does take a swipe at the sacred cow of Medicare but his main complaint is that it is hugely, HUGELY, unfunded.

This is a good chapter.

Loved this quote in Chp. 6 The Assault On Food:  “Government attracts do-gooders and meddlers who believe that, as Mark Twain put it, “Nothing so needs reforming as other people’s habits”” (p. 153.)

Chp. 7 Creating A Risk-Free World: “Nineteenth-century libertarian writer Herbert Spencer wisely said, “The ultimate result of shielding men from the effects of folly is to fill the world with fools.”” (p. 166.)

On ‘seat belt laws save lives’: “…economist Sam Peltzman argues that increased safety features on cars have the ironic effect of encouraging people to drive more recklessly because they worry less about accidents.  …Studies do show that people drive faster when they are snugly enclosed in seat belts. …Perhaps the best safety device would be a sharp spike mounted to the dashboard–pointed right at your chest.” (p. 170-171.) [!!-JH]

The chapter on education is good.  We spend a fortune per student in the U.S. and don’t get results.

Chp. 10 The War On Drugs is a sensitive issue.  I can see prohibition doesn’t work but it’s hard to wrap my head around legalization.  Stossel is usually factual but he is a bit sloppy when he cites “The U.S. government says heroin and nicotine are similarly addictive, but people don’t rob convenience stores to get Marlboros.” (p. 216.)  Uhhh, does not make sense.  There is no reference in the footnote section at the back of the book.  Very loose logic.

“While drugs harm many, the black market harms more.
And regardless of the harm, what about freedom?  Once we become adults, we should own our own bodies.” (p. 225.)  Logically true, but hard to stomach.  Sort of like motorcycle helmet laws.  We don’t have one in Colorado and my lady cringes when she sees people riding without helmets, but I say it’s their choice if they want to risk splitting their skull and they’re not harming anyone else.

The chapter on Budget is very good.  Stop… spending… money…

I thought the reference section at the back was too loosely constructed.  There are no footnotes during the book, which can be a good thing as one can spend too much time incessantly flipping back and forth.  Instead the rear section has loose references by page number.  Some items I questioned while reading did not have any reference in back.  It seemed very random and not very valuable.

Very good book otherwise.  Not a rant, but a reasoned discussion.  You don’t have to agree with him in order to read this.  You might learn something regardless, or at least have an appreciation for his point of view, many of which are shared by others tired of big government.

One thought on “NO THEY CAN’T by JOHN STOSSEL”