Copper Mountain had 11 inches of snow in the last week. FINALLY! Another 12-24 inches and the resort could open more than what seems like 15% of the entire ski area at present. The 11″ on top of the excellent man-made snow provided some pleasant skiing yesterday. It was what I call ‘soft-pack’, a few inches of soft snow on top of a moderately hard base. The hard base was more present on the steeper slopes where the soft was easily scraped off. 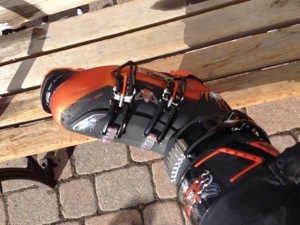 It’s probably the first pair of 3-buckle boots I’ve ever had in 40+ years of skiing. There were a lot of 3-buckle types at the store, Colorado Ski & Golf at Park Meadows in Denver (good inventory, knowledgeable staff). I guess that is the current wave.

With a metal plate on my ankle (left distal fibula) from a skiing accident March 2011 (“I’m WALKIN’ here!”) I was looking for more skiing comfort as well as ease of boot entry and exit. My well-performing 6+ year-old Salomon G9 boots still did the job but felt like a pair of vice grips and were a real struggle to get on and off. I had even bought an inexpensive medical cast spreader recently to try and hold open the plastic overlapping boot cuff during entrance/egress but it was cumbersome to use and didn’t help much. (I still like the idea of some time of spreader or spreading clamp you could temporarily attach to hold the boot open. Perhaps some of you innovators can expand on this idea.)

I can say after a day of leisurely skiing that the Salomon Quest 12s are a huge improvement. They slide on and off ‘better’ and ‘easier’, that being a relative term when it comes to a block of plastic foot incasement. They have a cuff release that allows some additional flex when walking. (See my ankle link mentioned above for the embarrassing way it was injured. I can’t bear to repeat it.) I’m also using Cat Tracks when walking.

The skiing comfort has improved immensely. My toes actually have wiggle room without sacrificing stability and performance. The side and heel of the foot are still held firmly but comfortably for ski control. They are warm too! That is somewhat of a novelty with many ski boots though you wouldn’t think it would be that way. It was very cold and breezy at Copper yesterday, 15F I would guess, but my feet stayed comfortable all day long. Nirvana!

There were a LOT of disabled skiers on the mountain participating in the Disabled Sports USA NorAm Race. It was good to see these people out and participating despite their disadvantages. It made me grateful for the seemingly small thing of walking upright with everything attached. Following are a few pix: 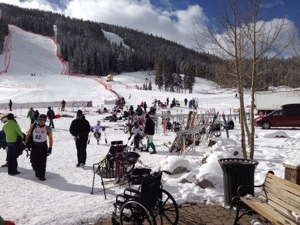 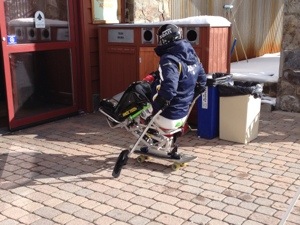 Then there was lunch. Some of the mountain eateries are closed due to low volume, early season conditions. Solitude Station, at the top of the American Eagle lift and bottom of the Excelerator lift, still dishes a few mean soups and plates from a small kiosk inside. I had the Oriental Chicken Soup a couple of weeks ago, which was dee-lish. They had Asian Chicken today (the same thing) but also had Jumbalaya on a bed of rice. I went for that. It was much more than I usually eat at midday on the mountain but it was tasty. See: 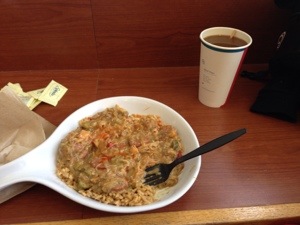 The view from the lodge was nice also…

…as was the view from the top of the Exelcerator lift:

(All photos taken with an iPhone5 and retrieved/blogged from an iPad2 via automatic iCloud syncing. Now THAT’S technology at work.)

To make a short story long it was a good day of skiing, warming up the legs after a 12 day absence from the mountain.

Following is a picture of Union Peak and Union Bowl taken from the top of the American Flyer Lift on 12/12/12:

Six days skiing so far this season. Ya’ gotta’ love the cost of the first day. It does get cheaper.