SHAME on the Wall Street Journal for making the Payroll Tax item a front page, above the fold, near-banner headline: 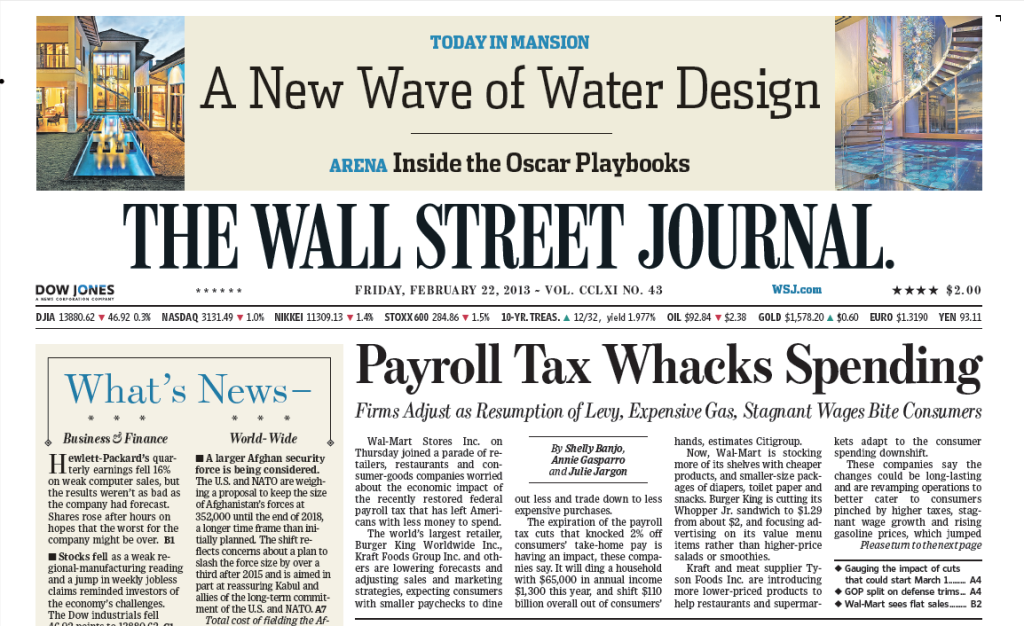 I may have to institute an official Donald Sutherland/1978 Invasion of the Body Snatchers SHAME AWARD for egregious (outstandingly bad; shocking) misrepresentation of facts to the public at large.  (See my previous post Gun control, Elisabeth Rosenthal, and the New York Times Posted on January 9, 2013.)

The payroll tax referred to is the OASDI (Old Age, Survivors, and Disability Insurance) that (allegedly!) funds Social Security.  This tax has been assessed and divided between  employers and employees for over SEVENTY-FIVE YEARS since 1937.  It has been the current rate of 12.4% (6.2% each emplr/emplee) since 1990.

Despite the fact that Social Security is going broke our Federal Government, hallowed be its name, in its infinite wisdom reduced the employee contribution from 6.2 to 4.2% for the years 2011 and 2012.  This two year temporary reduction has now been reinstated and according to the WSJ the economy is now going somewhere south in the proverbial hand-basket.

This was a temporary reduction in a pre-existing tax.  I am all for any tax reduction that puts more money into an individual’s pocket for his personal, free-to-choose use, whether it is spending or saving.  (Note how the government always wants us to SPEND money.  Even G.W. Bush gave us all $400 early in the recession, so we would SPEND and stimulate the economy.)

However, now that this temp reduction has been reinstated, all well into (and after?) this devastating recession, the WSJ is howling that retailers are being crushed.

I think the WSJ, supposedly a bastion of conservative thought and inclination, has gone whole-hog communist or at least been bought by the New York Times.

See the following references for verification of rates: