(See previous posts for what this tour is about.) (As always, click on photos to enlarge or play movie.)

Peggy suggested the theme for today was “Power of Place” and indeed it was. We visited many places Vets or Pup’s fathers had been. Sometimes we had WWII pictures to compare.

First, a word from our sponsors, German rapeseed production. I attempted to not take any pictures today of the yellow rapeseed fields that we have seen EVERYWHERE in Germany. Wikipedia does say that Germany is only 4th in worldwide production as of 2009, though the first 3 have larger geographical areas from which to produce. (China, Canada, and India.)

Germany appears to be third in global wind energy production, behind China and USA. Again it holds its own agains larger land mass countries.

The day starts with Esther’s birthday. Peggy, I think, has decorated the bus to celebrate our dear Dutch friend who has accompanied us on our tour.

Matthias Maurer is our guide again today and brings his children, wife, and mother on the trip. What a trip!

WE hit the back roads of Germany around Halle and Torgau again. One of the first stops is Jesnitz (yes-nits). This is the area where the father of Jerry and brother Mike (not on the tour) was killed during WWII. Jerry has flowers and tosses them into the swollen Mulde River, near buildings torn apart by a flash flood that themselves look reminiscent of WWII.

.
We visit Krostitz, the last WWII vet Bill was located before starting his return to the States: 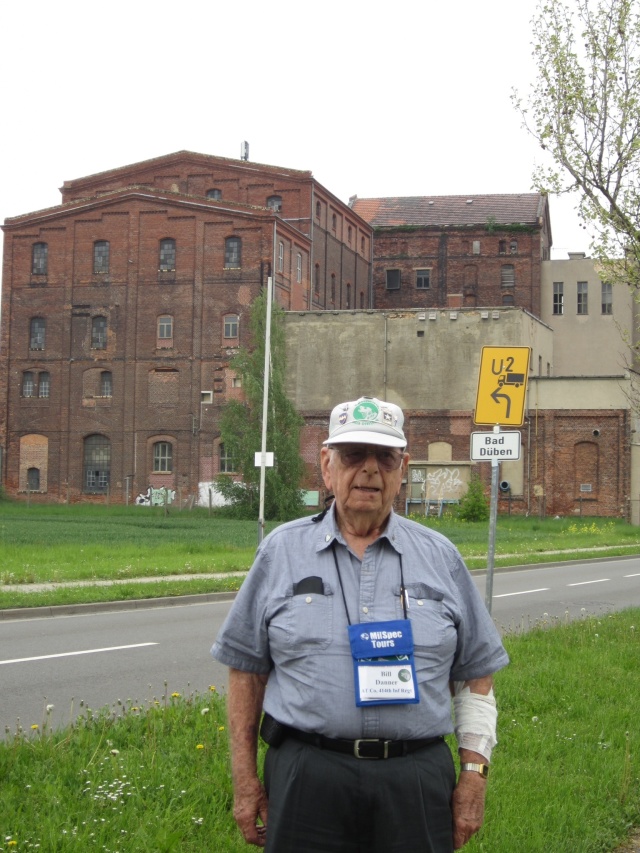 Before this we do make a minor stop in the town of Delitzsch where 104th Infantry Division Commander Gen. Terry Allen was located. We have photos of another commander at the door of the factory in WWII. You can compare them with photos of the door today. Same brickwork, same doorway. 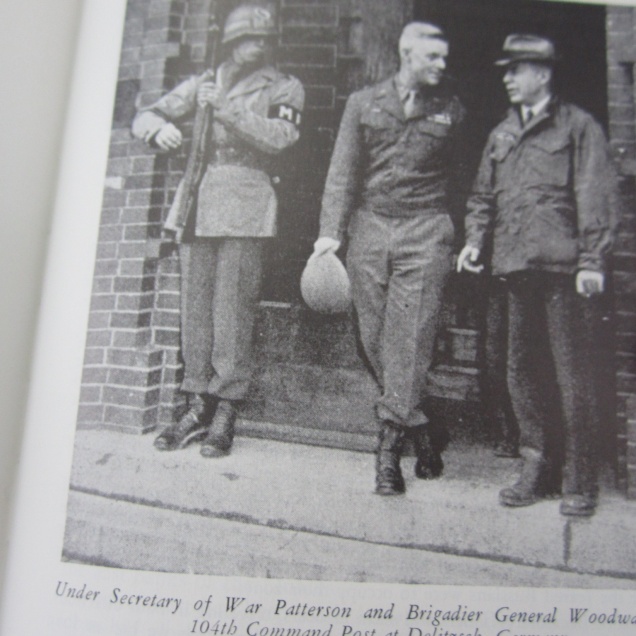 Our three WWII vets in the doorway. Bill, Bob, and Tom.

.
Matthias’ mother shows me pictures of our vets that appeared in the Halle newspaper today. She says they were on TV also.

Inside the factory we visit Gen. Allen’s office and share a generous sampling of oh so delicious (like Delitzsch?) chocolates. Afterward we make a daytime raid on the factory chocolate store and leave with bundles of ill-gotten but paid-for gains. I won’t get into the gains in my weight on this trip.

We take a group photo at the famous doorway: 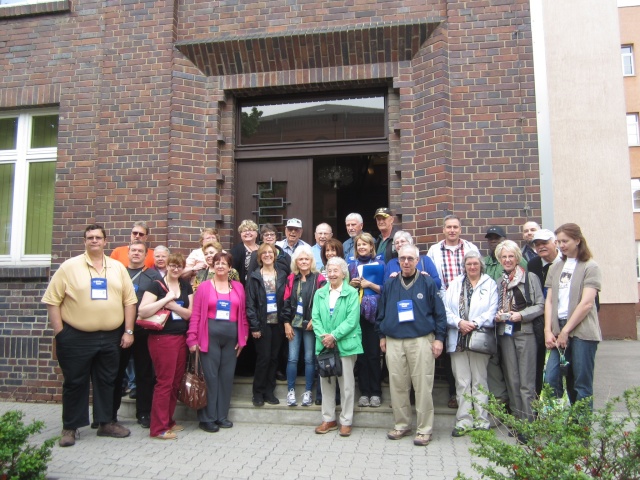 Onward we go to Torgau, the area where the 104th made contact with the Russians coming from the east to west. Germany and the future East Germany would never be the same, at least until 1989.

In another daring but planned daytime raid we take over a small gasthaus for lunch in the shadow of a large castle. Did I mention it’s Esther’s birthday? 🙂

WWII vet Bill gives Esther a box with a teddy bear inside. It is promptly named Tim B. Wolf. Get it? So what if it’s a bear, same Animal Kingdom.

.
Bob and Carmen by the Elbe River outside the gasthaus:

Carmen’s father was in Bob’s machine gun unit during WWII.

Our guides Matthias and Patrick manage to find the Elbe river crossing in Belgern where the 104th met the Russians. Mary and Julia have photos from their father. 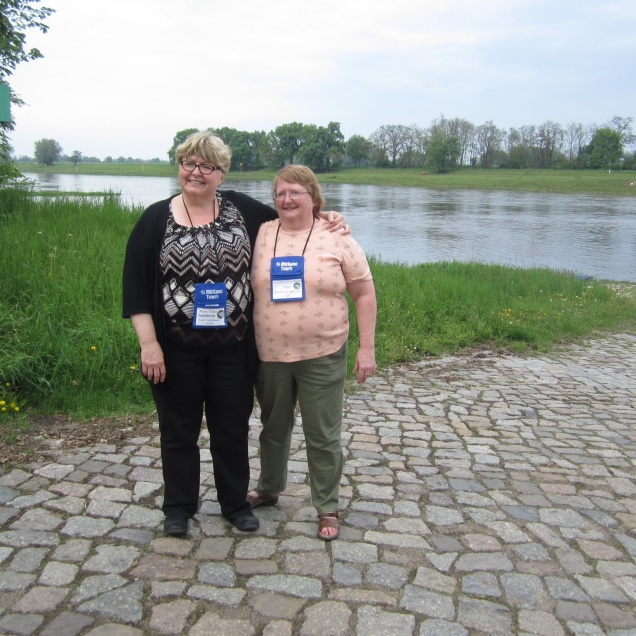 Mary and Julia at the Elbe River crossing (not the Mulde).

.
While we are at the crossing Nancy chats with Matthias about Halle photos here dad sent of himself from June 3, 1945.

Matthias says the photos (not shown) are from the Luftwaffe School and the Mulde River, both in Halle.

Finally it is on to Schloss (Castle) Puchau where the 415th Regimental HQ of the 104th was located: 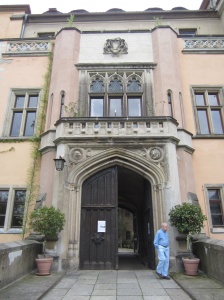 The long and winding road takes us back to Halle to drop off Matthias and family and have a quiet evening at the hotel.

You were right Peggy. ‘Power of Place.’