I am proud of myself. I have read TWO issues of L.Q. this summer. I read the very first issue published, States of War, reviewed HERE and HERE. I also just finished the current issue, The Sea. Now I will have time to read a book!

It’s all here this issue. 221 pages of reading and art reproduction to the Sources section at the end. Check.

Table of Contents including the main body of L.Q.: Voices in Time sections of Seascapes, Seafaring, and Seashores. Check.

Said contents listing authors and the year and place of their essay/extract. Melville is the 2nd item again, just like in the previous issue Animals. I’m looking forward to that.

(The cover is a nice linen white, not the bluish tinge of these photos poorly taken and cropped with my iPad2. The tinge may coincide with what most of us think of the deep blue sea, but Caroline Alexander may take exception to that with her minutely analytical essay on “the wine-dark sea” from Homer’s Iliad.)

The ‘Among the Contributors’ section (p. 8) includes James Cook (1728-1779), “…murdered on the island of Hawaii during a dispute with natives over a stolen boat. His body was cut to pieces and burned over a ceremonial fire to separate his flesh from his bones, which were then parceled out to local chiefs.” Also English-born Isabella Bird (1831-1904) who “…toured the Rocky Mountains, sailed the Sandwich Islands, rode horses in Tibet, and fought off hostile tribes in Persia When first asked to speak to the Royal Geographical Society, she said, “It seems scarcely consistent in a society which does not recognize the work of women to ask a woman to read a paper.”” You tell ’em.

The World Map, in the Introductory section, is Water World of course. 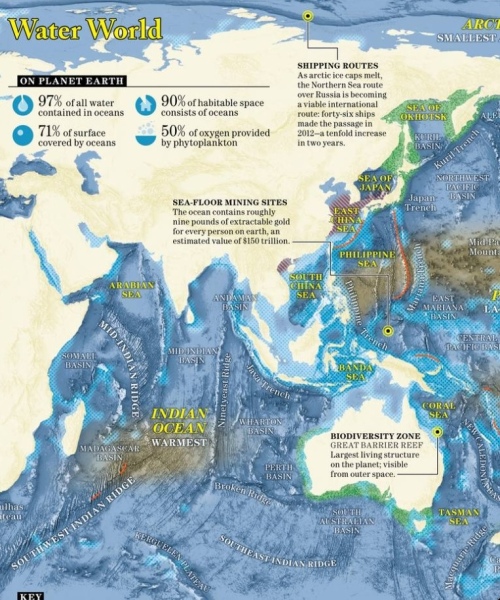 Editor/publisher Lewis H. Lapham’s Preamble is titled Sea Change. It is eloquent and thought-provoking as always. It’s a bit autobiographical, starting with him perched on his father’s shoulders at age two while viewing a shipwreck near the Golden Gate Bridge. (According to Wikipedia he would have been 3 months short of his 2nd birthday.) He speaks of his family’s association with the sea (a steamship company), his growing up in San Francisco with a view of the bay, his father’s literary bent which stimulated their conversations and his reading of sea-related books. “Surely the sea was eternal, going on forever, its vast prodigious bulk 71% of the earth’s surface, not to be contained within the frame of history or chained to the oars of death and time.” (p. 20.) Alas, not so, as he goes on to explain that man is contributing to the sea’s destruction. (I personally am not a global-warming alarmist but I have to agree with presented evidence that even the vast sea cannot cope with all the garbage we dump into it.) “Every year we withdraw 160 million tons of fish, deposit 7 million tons of garbage.” (p. 21.) He references W. Jeffrey Bolster’s book The Mortal Sea but surprisingly does not include an extract in this issue.

However, the first essay in Voices in Time, Seascapes, provides further proof. 2003: Long Beach, “Charles Moore Sails Into a Garbage Patch”. Unfortunately this one is not available free online but the next nine are, including Melville, Verne, and Cousteau. (You can find Moore’s extended essay here and he is on TED.)

Speaking of garbage, as noted I’m a global warming skeptic and reluctant recycler (m’lady is an inveterate recycler, peace in the household and all that). Moore’s essay combined with other evidence I’ve seen (Bing THIS for example, and see the Water World map) has me recycling plastic with greater fervor. Although I consider my efforts equivalent to saving one grain of sand on the entire planet I’m somewhat convinced mankind is capable of and perhaps well into the process of destroying our precious oceans. I personally would rather see trash buried, incinerated, or recycled and not in birds’ stomachs after it was eaten from the oceans.

I always love the sidebar quotes generously sprinkled throughout the quarterly:

Hmm. Think about it. We could have evolved into sentient beings with gills. Fodder for a sci-fi author.

Melville’s Moby Dick extract is superb (I must read this book again). Cousteau is quite adventuresome in 1943. Equiano’s The Accursed Trade, a 1756 personal account of a slave’s ocean passage, is excellent.

Isabella Bird’s noteworthy 1872 account (free also) of a creaky steamship passage in the Pacific prompted further searching. Her extended essay can be found here. Her book about Pacific travel is here. An VERY extensive account of Capt. Blethen is here. (This is why it takes me so long to read a mere 221 pages of L.Q. liberally sprinkled with fine art.)

The table of contents lists 26 items in each of the 3 sections. (Such precision.) They do cover the breadth of the subject.  As always, Lapham’s Quarterly does not disappoint.  It is engrossing, informative, and entertaining.

The final essays after the sections, some reaching an epic 6-8 pages in length (!), are outstanding.  C. Alexander’s ‘A Winelike Sea’ mentioned earlier is not to be missed.  The analysis of lexicology minutiae is fascinating.  ‘Around Alone’ by Maggie Shipstead is an adventuresome narrative of modern-day solo circumnavigators.

The Sea.  Calm, serene, ferocious tempest.  Uncaring, unforgiving, indiscriminate.  Surely The Sea must be a She.  Or is it just the weather that makes the sea what it is?

Joseph Conrad describes the sea best, in my opinion:

For all that has been said of the love that

certain natures (on shore) have professed to

feel for it, for all the celebrations it had been

the object of in prose and song, the sea has

never been friendly to man. At most it has

been the accomplice of human restlessness,

and playing the part of dangerous abettor of

worldwide ambitions. Faithful to no race after

the manner of the kindly earth, receiving no

impress from valor and toil and self-sacrifice,

recognizing no finality of dominion, the sea

has never adopted the cause of its masters

of mankind have taken root, rocking their

cradles and setting up their gravestones. He–

man or people–who, putting his trust in the

cunning of his right hand, is a fool! As if it

were too great, too mighty for common vir-

tues, the ocean has no compassion, no faith,

no law, no memory. lts fickleness is to be held

true to men’s purposes only by an undaunted

resolution, and by a sleepless, armed, jealous

vigilance, in which, perhaps, there has always

been more hate than love.