My standard parentheticals that apply to every issue of Lapham’s Quarterly I have read to date:
1. ‘Lapham’s Quarterly is the finest publication I read.  One could spend a decent college semester studying a mere handful of the 75+ literary extracts and authors in each issue.  I feel my reviews are woefully inadequate.’
2. ‘Each quarter per annum editor Lewis H. Lapham and his staff assemble a compendium of thoughts on a particular subject from the span of written history.’
3. ‘In L.Q. I am exposed to the great minds of time immemorial without having to read the complete works of each, such is the state of the modern lackadaisical non-classical education.’

There are three sections of literary excerpts in this quarter’s Voices In Time:
Stirrings – 26
Uprisings – 27
Evaluations – 25
(Total – 78)

With a similar number in each issue I feel my reviews are often hit-and-miss in coverage. Perhaps a more selective in-depth analysis would be a departure.

Before the ViT sections are info-graphic maps I usually give a cursory glance.  There are three this issue.  That is a bonus as there is often only one.  Revolutions in Politics, Science, and Technology.  The revolution in Technology is… wait for it… the wheel!  It makes sense.  It shows the ‘wheel of progress’ in the areas of agriculture, entertainment, industry, and transportation.  If you don’t have a digital or print copy of this issue the map can be seen in microprint here, a selection from this page.

The graphics are cleverly presented, though even the actual digital and print issues are in microprint and difficult to read.  As noted in the lower right corners, ‘Map by Haisam Hussein’.  He has published many maps in L.Q. over the years.  Information about him is here and here.

The map that really received my attention was the first one: Political Revolutions, Uprisings and Rebellions (here or here (the one with dots).  The following snapshot (L.Q. pp.  10-11) gives you a rough idea:

One could spend a good portion of that study semester I mentioned perusing this map.

There are 237 listed incidences charted left to right between 520B.C. (the Athenian Revolution 508B.C.) and 2014A.D (the Euromaidan/Kiev, Ukraine protests through Feb. 2014).   We are not offered any references that number or types of incidents are accurate. It is impressive regardless.

I’ve heard of Tupac Shakur.  He was a popular ‘Rap Music’ (oxymoron?) star until killed in a drive-by shooting.  Wikipedia tells us:
“He was named after Túpac Amaru,[17][18] an 18th-century South American revolutionary who was executed after leading an indigenous uprising against Spanish rule.[19]

His mother, Afeni Shakur, and his father, Billy Garland, were active members of the Black Panther Party in New York in the late 1960s and early 1970s. The infant was born a month after his mother was acquitted of more than 150 charges of “Conspiracy against the United States government and New York landmarks” in the New York “Panther 21” court case.[20][21]“

He must have been named for our 18th-century revolutionary.  That’s as much as I need to know about Shakur.  We do see the reference to an 18th-century Tupac.

Wiki on Tupac Amaru is much more interesting.  Wiki tells us:
“Túpac Amaru or Thupa Amaro (Quechua: Thupaq Amaru) (1545–1572) was the last indigenous monarch (Sapa Inca) of the Inca state in Peru. He was executed by the Spanish.”

This is the original Tupac Amaru, preceding ‘the II’ by 300+ years.  His Wiki page (linked previously) makes brief but interesting reading.  His fight for freedom of the Incas is not an uprising or rebellion.  It is a fight for the resistance of conquest by the Spanish, started 40 years earlier with the execution of Incan chief Atahualpa (depicted by Christopher Plummer in the 1969 movie The Royal Hunt of the Sun, by the way).

Amaru is the last Incan chief, slowed in his escape by his pregnant wife.  He is captured and beheaded before thousands of native Incas who you would think heavily outnumber the Spanish but make no move to save him.

“In Cuzco in 1589, Don Mancio Serra de Leguisamo — one of the last survivors of the original conquerors of Peru—wrote in the preamble of his will, the following, in parts:

We found these kingdoms in such good order, and the said Incas governed them in such wise [manner] that throughout them there was not a thief, nor a vicious man, nor an adulteress, nor was a bad woman admitted among them, nor were there immoral people. The men had honest and useful occupations. The lands, forests, mines, pastures, houses and all kinds of products were regulated and distributed in such sort that each one knew his property without any other person seizing it or occupying it, nor were there law suits respecting it… the motive which obliges me to make this statement is the discharge of my conscience, as I find myself guilty. For we have destroyed by our evil example, the people who had such a government as was enjoyed by these natives.”

So much for bringing civilization to the heathens.

Fast forward 300 years to item 64’s Tupac Amaru II that started this search.  Wiki tells us he was born José Gabriel Condorcanqui and claimed to be a direct descendant of the first Tupac Amaru.  It gives us a brief but informative account of his life and rebellion.

The 18th-century Spanish were even less kind (?) in his execution than the 16th-century were of Amaru I.  The II was forced to watch the execution of his wife, son, uncle, and others, his tongue was cut out, he was quartered (pulled apart by a horse attached to each arm and leg) and beheaded.  There is that civilization thing again.

According to Wiki: “Although Túpac Amaru II’s rebellion was not a success, it marked the first large-scale rebellion in the Spanish colonies and inspired the revolt of many Natives and mestizos in the surrounding area.”

All of this is just from researching one item on one map.  I haven’t even read Lewis Lapham’s presumably superb introduction yet.

For next week’s lesson you should pick another item from this map and give me an informative report on your research.  Item 93 Adelkader’s Rebellion (c. 1840A.D.) or item 190 The New Jewell Coup (c. 1970) sound suitably obscure.  Have at it.

Speaking of music, if not the Beatles perhaps The Jefferson Airplane?

However nothing beats The Battle Hymn of the Republic (unless it is Onward Christian Soldiers):

“Mine eyes have seen the glory of the coming of the Lord;
He is trampling out the vintage where the grapes of wrath are stored;
He hath loosed the fateful lightning of His terrible swift sword:
His truth is marching on.”

The hymns may be more appropriate for Lapham’s Quarterly Winter 2008: States of War.

On with the rebellion. 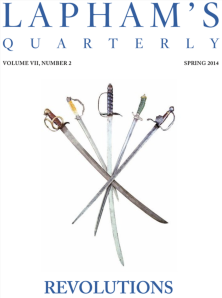