I had heard about elephants doing that.  Perhaps a news item I’d run across recently in that mishmash of internet news reading I do that I think keeps me informed.  No!  It was LAPHAM’S QUARTERLY!!  The DEATH issue of course, Fall 2013 (reviewed).  The Mournful Creatures essay in the back, I later confirmed.  I was proud of myself for remembering.

Ms. Picoult was telling us about researching real facts for her fictional novels (21 to date). M’lady had one of her books on our shelves at home and I saw last winter that our county library was sponsoring Jodi for a talk 30 April.  I suggested we attend and as preparation I read the book at home, The Tenth Circle (reviewed).  I really liked it though I found it has one of the lesser cumulative ratings (3+ stars of 5) than most of her other books (all 4+). M’lady had not read it but had read another some time ago.

Not traveling in literary circles as I do I had been pronouncing her name Pee-colt or Pee-cult.  It is definitely PeeKoe.  I was one of at least seven males I counted in a large room of I’d say five hundred women.  I’m sure I missed some, though a couple of the males may have been dragged to the event with their wives on the senior’s bus parked in front.

I was surprised as from my one novel read of hers I did not consider her as a women only, ‘chick-lit’ writer.  Personally I just can’t get through that stuff.  I’m sure plenty of women read male author John Grisham.  I hope men aren’t dismissing Picoult based on gender. Horrors.  I think she may be equally thought-provoking.

As one post-talk questioner noted, Ms. Picoult’s novels usually surround a moral dilemma. That is what I liked about Tenth Circle.

Like Grisham, she has a novel addressing the death penalty.  Change of Heart I think is the one.  I’m interested in reading it sometime, particularly with the botched execution this week in Oklahoma.  Botched in the sense that the chemical cocktail did not peacefully kill the convicted murderer but that he died of a heart attack after prolonged agony and exploding veins.  To be more exact should we institute the guillotine or just use a heavy sharp sword for beheading, like in The Game of Thrones?

The death penalty intrigues me as a prime example of the state of civilization today, 1400 years after Mohammed, 2000 years after Jesus Christ, many more than that after the ancient Greeks, Egyptians, Abyssinians, Hindus, Chinese, et al.

We, civilized men and women, still murder each other prolifically, and as punishment for that we murder back.  I say both are cruel and unusual.  Cruel at least, unfortunately not unusual.

Some of the novels about which she spoke and sound very compelling to read are the aforementioned Change of Heart, Second Glance, Nineteen Minutes (about bullying and school shooters, for which she partially researched the Columbine shooting here in Colorado), and The Storyteller.  You can get synopses by clicking the Book link at her website.

She is an excellent speaker also.  If you get a chance to see and hear her you might enjoy it.

She said it takes her about nine months to write a novel (like giving birth).  That includes research time which is sometimes a lot of the nine and sometimes less.

Need a good fiction read that ponders moral dilemmas?  Try one of hers.

The covers sure give me that ‘women’s novelist’ feel, but she is good.  I will read her again. 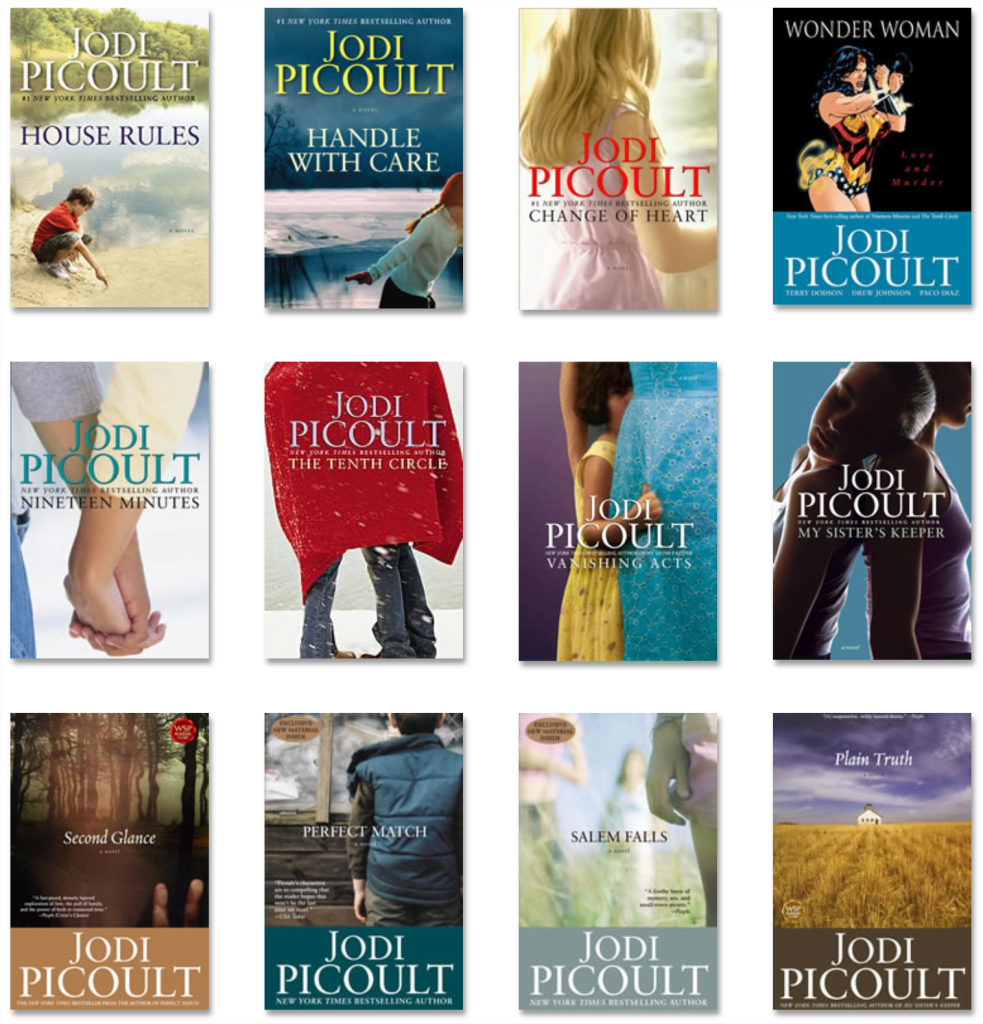