[CATEGORIES: Literature, Lapham’s Quarterly, Reading, Book Review]
[Click HERE or HERE to see my previous posts reviewing or referencing Lapham’s Quarterly.]
[Some of LQ’s contents are available free.  See Archives on that page for back issues.]

The main part of any Lapham’s Quarterly is Voices In Time, excerpts from history about the current theme.  Usually in three parts, this quarter’s sections are:

The first excerpt in Stirrings is about the beginnings of Occupy Wall Street.  (Cue those Beatles lyrics again from partial review one?)  David Graeber, ‘an American anthropologist, author, anarchist, and activist’ (Wiki) enlightens us.  It sounds like the birth of communism, which has worked so well.  The General Assembly, the Tactical group, the People’s Microphone.  Activists from the days of the Global Justice Movement. I expect to see Sandra Fluke appear but no such luck.  Graeber is the author of Debt: The First 5000 Years which sounds like a noteworthy topic to pursue.  I’m biased however that he may be biased.  Onward.

1963 – Hannah Arendt (Wiki) Restores the Definition.  What is revolution but revolving. Returning.  Restoration.

1517 – Martin Luther Questions the Pope (or, Martin Luther Nails It, as the free online contents punningly list it referencing the apocryphal (there is that vo-cab again) nailing to the door of Luther’s 95 Theses.  Christian religion.

“To wit: “Why does not the pope empty purgatory, for the sake of holy love and of the dire need of the souls that are there, if he redeems an infinite number of souls for the sake of miserable money with which to build a church?  The former reasons would be most just; the latter is most trivial.” (p. 36)

To that I say why doesn’t God?  …Exactly.  There would be nothing to talk about.  Religion is not my cup of tea. 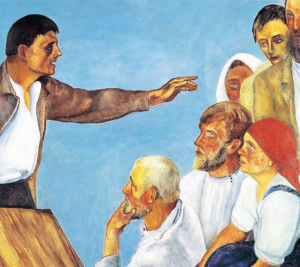 c. 1870 – Dostoevsky Entertains the Arguments (or, in my opinion, Dostoevsky Nails It).

“Having devoted my energy to studying the
question of the social organization of the future
society which is to replace the present one, I have
come to the conclusion that all creators of social
systems from ancient times to now have been
dreamers, tale tellers, fools who contradicted
themselves and understood precisely nothing of
natural science or of that strange animal known
as man. Plato, Rousseau, Fourier, aluminum col-
umns-all this is fit perhaps for sparrows, but
not for human society. But since the future so-
cial form is necessary precisely now, when we are
all finally going to act, so as to stop any further
thinking about it, I am suggesting my own sys-
tem of world organization. Here it is!” he struck
the notebook. “I wanted to explain my book to
the gathering in the briefest possible way, but I
see that I will have to add a great deal of verbal
clarification, and therefore the whole explana-
tion will take at least ten evenings, according to
the number of chapters in my book.” (Laugh-
ter was heard.) “Besides that, I announce ahead
of time that my system is not finished.” (More
laughter.) “I got entangled in my own data, and
my conclusion directly contradicts the original
idea from which I start. Starting from unlimited
freedom, I conclude with unlimited despotism.”

Later he does a good Abbot and Costello bit too, if you can discern it.

As usual Wiki enlightens further.  I must add this author of Crime and Punishment and The Brothers Karamazov to my two-lifetimes-worth of mandatory reading.

Thus are the first four excerpts, of the 78-80 contained, not counting a couple of sidebars and a few long essays at the end.  Lest I write my own quarterly while reviewing this one I’ll attempt to only mention a few that considerably pique my enthusiasm.  That could be difficult.

(p. 55)  As staves and pitchforks are passé there always seems to be a gun involved.

1848 – Marx and Engels from The Communist Manifesto.  “The history of all hitherto existing society is the history of class struggles.”  (p. 42)  The excerpt often sounds like it’s advocating capitalism.  It must be my rose-colored reading glasses.

1941 – George Orwell (Eric Arthur Blair), during the WWII bombing of London.  “Internally, England is still the rich man’s paradise.  All talk of “equality of sacrifice” is nonsense.” (p. 45)  “At some point or another you have got to deal with the man who says, “I should be no worse off under Hitler.”  But what answer can you give him–that is, what answer that you can expect him to listen to–while common soldiers risk their lives for two and sixpence a day, and fat women ride around in Rolls-Royce cars, nursing Pekingeses?” (p. 46)  I also recommend his Shooting An Elephant.

“Our modern fetish is universal suffrage. Those who have not yet achieved that goal fight bloody revolutions to obtain it, and those who have enjoyed its reign bring heavy sacrifice to the altar of this omnipotent deity. Woe to the heretic who dares question that divinity! Woman’s demand for equal suffrage is based largely on the contention that woman must have the equal right in all affairs of society. No one could, possibly, refute that, if suffrage were a right. Alas, for the ignorance of the human mind, which can see a right in an imposition. Or is it not the most brutal imposition for one set of people to make laws that another set is coerced by force to obey? Yet woman clamors for that “golden opportunity” that has wrought so much misery in the world, and robbed man of his integrity and self-reliance, an imposition that has thoroughly corrupted the people and made them absolute prey in the hands of unscrupulous politicians.

I am not opposed to woman suffrage on the conventional ground that she is not equal to it. I see neither physical, psychological, nor mental reasons why woman should not have the equal right to vote with man. But that cannot possibly blind me to the absurd notion that woman will accomplish that wherein man has failed. If she would not make things worse, she certainly could not make them better. To assume, therefore, that she would succeed in purifying something which is not susceptible of purification is to credit her with supernatural powers. Since woman’s greatest misfortune has been that she was looked upon as either angel or devil, her true salvation lies in being placed on earth, namely, in being considered human and therefore subject to all human follies and mistakes. Are we, then, to believe that two errors will make a right? Are we to assume that the poison already inherent in politics will be decreased if women were to enter the political arena? The most ardent suffragists would hardly maintain such a folly.”

(Here is its entirety.)

In this issue she provokes thought on the distinction between marriage and love.

“Marriage and love have nothing in common; they are as far apart as the poles—are, in fact, antagonistic to each other.”

“That marriage is a failure none but the very stupid will deny. One has but to glance over the statistics of divorce to realize how bitter a failure marriage really is. Nor will the stereotyped philistine argument that the laxity of divorce laws and the growing looseness of women account for the facts that: first, every twelfth marriage ends in divorce; second, that since 1870 divorces have increased from twenty-eight to seventy-three for every hundred thousand people; third, that adultery, since 1867, as grounds for divorce, has increased 270.8 percent; fourth, that desertion increased 369.8 percent.”

Wouldn’t Emma love these stats from the CDC (are marriage and divorce diseases?):

“As to the protection of the woman—therein lies the curse of marriage. Not that it really protects her, but the very idea is so revolting, such an outrage and insult on life, so degrading to human dignity, as to forever condemn this parasitic institution.

It is like that other paternal arrangement—capitalism. It robs man of his birthright, stunts his growth, poisons his body, keeps him in ignorance, in poverty, and dependence, and then institutes charities that thrive on the last vestige of man’s self-respect.

The institution of marriage makes a parasite of woman, an absolute dependent. It incapacitates her for life’s struggle, annihilates her social consciousness, paralyzes her imagination, and then imposes its gracious protection, which is in reality a snare, a travesty on human character.”

Oh no!  She hates capitalism too!

“Love, the strongest and deepest element in all life, the harbinger of hope, of joy, of ecstasy; love, the defier of all laws, of all conventions; love, the freest, the most powerful molder of human destiny; how can such an all-compelling force be synonymous with that poor little state- and church-begotten weed, marriage?

Free love? As if love is anything but free! Man has bought brains, but all the millions in the world have failed to buy love.”

“In our present pygmy state, love is indeed a stranger to most people. Misunderstood and shunned, it rarely takes root; or if it does, it soon withers and dies. Its delicate fiber cannot endure the stress and strain of the daily grind. Its soul is too complex to adjust itself to the slimy woof of our social fabric. It weeps and moans and suffers with those who have need of it, yet lack the capacity to rise to love’s summit.

Someday, someday men and women will rise, they will reach the mountain peak, they will meet big and strong and free, ready to receive, to partake, and to bask in the golden rays of love. What fancy, what imagination, what poetic genius can foresee even approximately the potentialities of such a force in the life of men and women. If the world is ever to give birth to true companionship and oneness, not marriage, but love will be the parent.”

Poetic if naught else, but she is definitely not naught.  I suspect she is a time traveler.  Its entirety.

Aristotle Nails It.  I’ll discuss in the next iteration.

Read, you ghostly apparitions of electricity who pass here.  Read often, read more.  Then do …and…