[CATEGORIES: Literature, Lapham’s Quarterly, Reading, Book Review]
[Click HERE to see my previous posts referencing Lapham’s Quarterly.]
[Some of LQ’s contents are available free.]
[All photos taken legally (no flash!) by me, most at the Art Institute of Chicago or The Ringling] 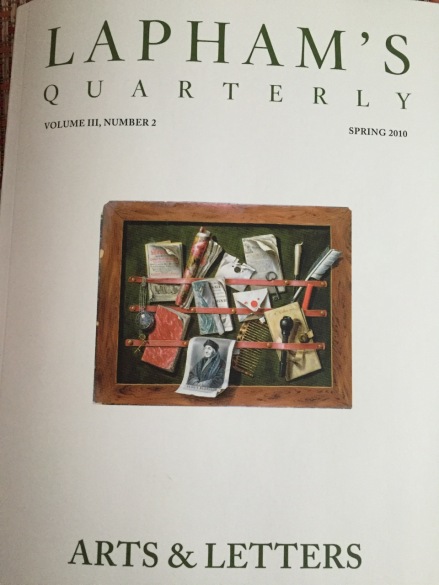 L.Q. is not one to shy from broad topics such as Time, Youth, Death, The Sea, and The Future.  Arts and Letters is no exception.

As it currently notes on its About page:
“Lapham’s Quarterly embodies the belief that history is the root of all education, scientific and literary as well as political and economic. Each issue addresses a topic of current interest and concern—war, religion, money, medicine, nature, crime—by bringing up to the microphone of the present the advice and counsel of the past. ” 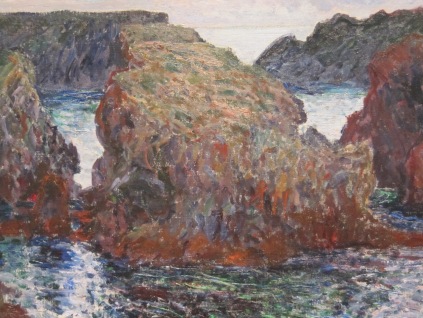 Who will be good this issue?  Possibly Tolstoy, Richard Wagner, Nabokov, Plato, Virginia Woolf, Louis Armstrong, Faulkner, James Baldwin (I like his writing despite his constant disillusionment), Van Gogh, Orwell, Aristotle, Michelangelo, or John Ruskin, to name but a very few of the 96 authors in this issue.

The two-page graphic by the inimitable Haisam Hussein is noteworthy.  It gives the evolution of 4 stories: Pygmalion, Oedipus, Faust, and Leviathan.  It is available free at LaphamsQuarterly.org if you can find it.  (Think treasure hunt.)

In reading the ‘Letters’ of Lewis Lapham’s preamble perhaps I should follow the advice of 19th-century lecturer John Ruskin:

“And therefore, first of all, I tell you, earnestly and authoritatively (I know I am right in this,) you must get into the habit of looking intensely at words, and assuring yourself of their meaning, syllable by syllable – nay, letter by letter. For though it is only by reason of the opposition of letters in the function of signs, to sounds in the function of signs, that the study of books is called “literature,” and that a man versed in it is called, by the consent of nations, a man of letters instead of a man of books, or of words, you may yet connect with that accidental nomenclature this real fact: – that you might read all the books in the British Museum (if you could live long enough) and remain an utterly “illiterate,” uneducated person; but that if you read ten pages of a good book, letter by letter, – that is to say, with real accuracy, – you are forevermore in some measure an educated person.” [Emphases mine-JH]

One of my favorite quotes conferred on me by a good friend and mentor, this is from Sesames and Lilies: Lecture I: Of Kings and Treasuries.  It is NOT part of Ruskin’s extract on perfection in this issue but it is a wise admonishment for any reading.

The Preamble: Lady In A Veil and Lewis are as cryptic to me as ever, but I am the eternal novitiate in my quest for truth, justice, and the American Way.  The words didn’t come together the first few times.  I think I’m beginning to decipher.

The Lady In A Veil is Art.  Beethoven’s quote says “Art… …this great goddess”.  After Lapham tells us he could once play a few of Beethoven’s sonatas (he’s always a bit autobiographical) “in the listening to most of which I discover the enlarged sense and state of being that is the presence of the great goddess” he says:

“The liftings of her veil in this issue of Lapham’s Quarterly concern the uses of art as a medium of exchange, the gift in the hand of its creator alive in the mind of its beholder, converting the private to a public good and thereby adding it to the common store of human energy and hope.” (p. 13)

A medium of exchange.  A gift to the mind of the beholder, private to public good, the common store of human energy.  These seem like lofty ideals.  Do artists create for the greater good?  To me art and letters are an expression, something the artist wants to say, a message to convey.  This is a lofty ideal of my own perhaps.  Is the expression for sale?Perhaps nearly always.  One must provide for one’s self.  I’m sure artists throughout the ages have hungered for bread as much as expression.

“The supposition that art is a gift as opposed to a collectible, something that doesn’t try to sell you anything, runs counter to our contemporary notions of what constitutes a meaningful exchange. ” (p. 13)  This I think is the crux of his dissertation.  Is art more a commodity now and less an expression? 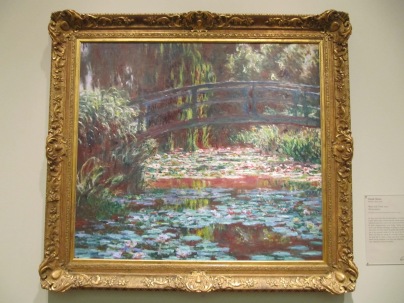 He doesn’t seem to think much of modern art or letters:

“Introduced to the modernist doctrines of alienation and despair, I took the notes but didn’t learn the lesson. The Bauhaus architecture I thought better suited for a barracks or a penitentiary; in the paintings of Mondrian and Kandinsky I could recognize little else except the surface of a decorative design.” (p. 16)

“Novels that in the 1950s set out to discover how it is with man in the company of other men gave way in the 1980s to the writing of memoirs intent upon discovering that when one really had a chance to think about it, the world and all its troubles were really all about me.” (p. 18)

I see his point and can’t say I disagree.  Modern art totally escapes me.  I’ve always been a fan of Impressionist painting, the world viewed post-realism but pre-abstractionism through a haze of Monet fog, Van Gogh’s thick brush strokes, Signac/Seurat’s pointillism. However the more I view the exactness of depiction during the previous four or five centuries such as displayed at the fabulous Ringling Museum of Art the more I admire the precision required.  I recently viewed a similar precision present in the paintings of Andrew and Jamie Wyeth.  The individual hairs in a beard, the near-infinite lines in the bark of a tree, ruddy realistic complexions produced somehow from a blending of reds, greens, and yellows when you look closely.  I am forever in child-like awe of creators of great works.  That is all the commodity exchange I need.

Here are just a few more of the many tidbits I noted in the preamble:

“Both at home and at school in the 1940s, I kept company with authors in whose writing I could hear the music in the words, in the novels of Joseph Conrad, Edward Gibbon’s history of the Roman Empire, the poems of Coleridge and Kipling.” (p. 14)

“Regarding myself as neither art historian nor literary critic…”. (p. 15)  Really Lewis?  You the founder of L.Q.?  Sooooo modest.

“Under the aegis of the Congress of Cultural Freedom, the CIA was deploying American art as a Cold War weapon of mass instruction.” (p. 15)  Cute play on words I suppose.

“By the time President Ronald Reagan danced onto the White House stage in 1981, politics was fashion, news was entertainment, celebrity was art, literature a regional dialect spoken only in the universities. ” (p. 17)  Was that Reagan’s fault?  Both sides of ‘the media’ seem less fair and balanced than ever.

The Preamble is available free online.

The following group of photos were taken, con permiso, at The Ringling (The John & Mabel Ringling Museum of Art) in Sarasota, Florida.  I wish I lived there so I could visit this museum OFTEN.  Admission to the museum is free every Monday.