[CATEGORIES: Literature, Lapham’s Quarterly, Reading, Book Review]
[Click HERE to see my previous posts referencing Lapham’s Quarterly.]
[Some of LQ’s contents are available free.]
[All photos taken legally (no flash!) by me, most at The Ringling in Sarasota FL.]

Following John Ruskin’s advice in the first part of this review of “looking intensely at words, and assuring yourself of their meaning, syllable by syllable, nay, letter by letter” I jumped to his extract on p. 172: 1853, Venice, Everlasting Laws.

His conclusion: “Accept this then for an universal law, that neither architecture nor any other noble work of man can be good unless it be imperfect, and let us be prepared for the otherwise strange fact that the first cause of the fall of the arts of Europe was a relentless requirement of perfection…”.

Hmm.  The fall of the arts due to the requirement of perfection, if indeed they have fallen in 1853.  We don’t have the rest of this essay at hand to find what he doesn’t like about the state of the arts at that time.

His premises: “…no architecture can be truly noble which is not imperfect…”.  “For since the architect, whom we will suppose capable of doing all in perfection [‘suppose’? supposition, unfounded assertion, OBJECTION your honor! (Overruled.) -JH], cannot execute the whole with his own hands, he must either make slaves of his workmen in the old Greek and present English fashion [a not so subtle jab at England there -JH] and level his work to a slave’s capacities–which is to degrade it–or else he must take his workmen as he finds them, and let them show their weakness together with their strengths, which will involve the Gothic imperfection, but render the whole work as noble as the intellect of the age can make it.”

The person capable of perfection cannot find men able to execute his work perfectly.  Don’t get me started on work crews repairing or remodeling my home.  There is certainly an element of truth there in my mundane world.

“…Accurately speaking, no good work whatever can be perfect and the demand for perfection is always a sign of a misunderstanding of the ends of art.
This is for two reasons, both based on everlasting laws.  The first, that no great man ever stops working till he has reached his point of failure, that is to say, his mind is always far in advance of his powers of execution…”
“…Therefore, if we are to have great men working at all, or less men doing their best, the work will be imperfect, however beautiful.”

I find striving for perfection admirable and attaining it nearly impossible, except for inspiring characters in fictional novels perhaps.  It’s part of the human dichotomy perhaps.  We dream of the very best yet are unable to fully attain it, thus setting ourselves up for cycles of disappointment and dissatisfaction.  That’s why we invented psychologists isn’t it?  😉

“The second reason is that imperfection is in some sort essential to all that we know of life.”
“To banish imperfection is to destroy expression, to check exertion, to paralyze vitality.” 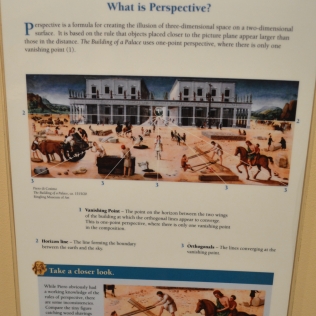 [The Building of a Palace by Piero di Cosimo]

Contemplating groupthink and doublethink in light of free speech, microagression and our current presidential campaigns, with Ruskin in mind I next jumped to George Orwell’s extract on p. 91: 1946, London, …On Bad Writing.

Orwell cuts to the chase very quickly: “A man may take to drink because he feels himself to be a failure, and then fail all the more completely because he drinks.  It is rather the same thing that is happening to the English language.  It becomes ugly and inaccurate because our thoughts are foolish, but the slovenliness of our language makes it easier for us to have foolish thoughts.” (p. 91)

Spot on, George, as the British would say.  Foolishness of thought indeed, or no thought at all. We don’t need structure!  (Don’t get me started on principles.)  Structure is conformity and I’m an individual, a nonconformist!

“When one critic writes, “The outstanding feature of Mr. X’s work is its living quality,” while another writes, “The immediately striking thing about Mr. X’s work si its peculiar deadness,” the reader accepts this as a simple difference of opinion.  If words like black and white were involved, instead of the jargon words dead and living, he would see at once that language was being used in an improper way.” (p. 93)

Orwell would have loved the furniture design show I watched on tv a few days ago.  “That piece isn’t lyrical” one of the judges criticized.  Lyrical.  A piece of furniture.  Don’t you wish people would just speak english?

Noteworthy links to begin an exploration of The Ringling: