A review, continued and concluded.  It is hidden among the photos of my recent visit to the DAM (Denver Art Museum).  The L.Q. review is rife with obfuscation and verisimilitude.  I suggest you do not read it.  Look at the art pictures and be satisfied with that.  You have been warned.

The three main sections of this issue are Inspiration (with 27 extracts), Creation (29), and Exhibition (36).  There are 4 extended essays in the Further Remarks section at the end.

I found the Inspiration section generally, uh, uninspiring.  It is about what inspired artists not what inspired me.  Of the 27 extracts I thought 9 were noteworthy.  Two others piqued my interest if not my agreement.  At least 4 others left me mystified.

I will give exception to Annie Dillard:

“Do you think I could be a writer?”  “Well,” the writer said, “I don’t know … Do you like sentences?” (p.  22)
“”It makes more sense to write one big book… …than to write many stories or essays.  Into a long, ambitious project you can fit or pour all you possess and learn.” … “It is no less difficult to write sentences in a recipe than sentences in Moby-Dick.  So you might as well write Moby-Dick.” (p. 22)

[In multiple picture galleries click a picture to enlarge, scroll down, click to enlarge again and again.] 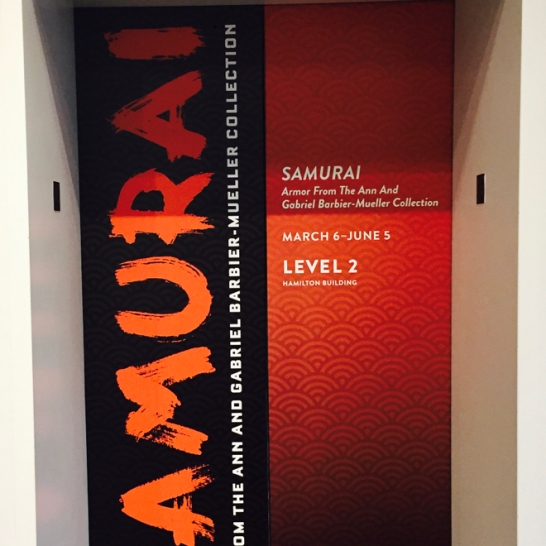 The elevator doors tell the tale at the art museum.

These two photos have the chrome enhancement from iPhotos. What is real and what is not?

Kandinsky muses.  “I could never bring myself to use a form which developed out of the application of logic–not purely from feeling within me.” (p. 23)
“Each work originates just as does the cosmos–through catastrophes which out of the chaotic din of instruments ultimately create a symphony, the music of the spheres.  The creation of works of art is the creation of the world.” (p. 24)

Tolstoy communes.  “…through the word a man conveys his thoughts to another, while through art people convey their feelings to each other.” (p. 26) 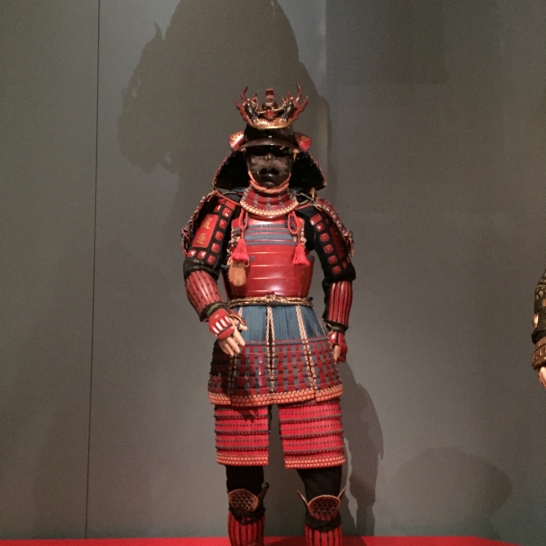 Our docent tour was somewhat disappointing. 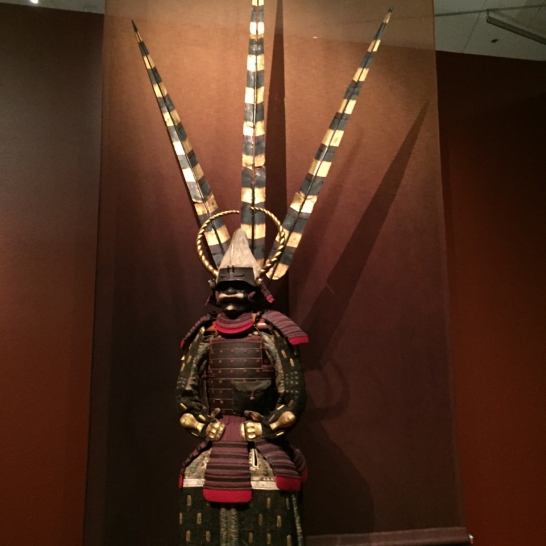 The construction of the armor (materials, method) was not discussed.

There are a lot of Italians, not the there is anything wrong with that.  Filippo Marinetti at least gets my attention with his misguided fascist fanaticism:

“Up to now literature has exalted a pensive immobility, ecstasy, and sleep.  We intend to exalt aggressive action, a feverish insomnia, the racer’s stride, the mortal leap, the punch, and the slap.”
“It is from Italy that we launch through the world this violently upsetting incendiary manifesto of ours.  With it, today, we establish Futurism, because we want to free this land from its smelly gangrene of professors, archaeologists, ciceroni [guides, docents -JH], and antiquarians.  For too long has Italy been a dealer in secondhand clothes.  We mean to free her from the numberless museums that cover her like so many graveyards.” (p. 51)

Well!  What does he really think?!

We’re told the primary samurai period was from the 12th through the 16th century, though most of the armor on display is from the 17th century.

One of their weapons was a seven-foot long bow. We’re told it could be gripped and fired off-center. 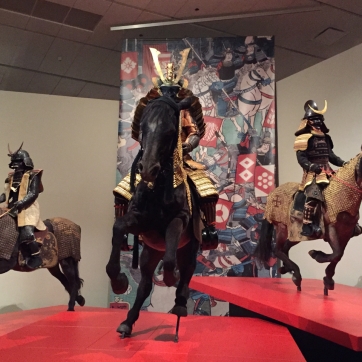 Someday I must track and report my Wikipedia reading of L.Q. authors with whom I’m not familiar.  Such reading is extensive every issue.

The Creation section I actually found very inspiring.  Only 3 of the first 15 of 29 do not get my coveted ‘*’ notation as being noteworthy.  Three of those 12 get my rare ‘**’ notation as being exceptional.  They are Vonnegut, Hamsun (where’s my Wiki), and Orwell.  In all 19 of 29 were ‘*’ or better. 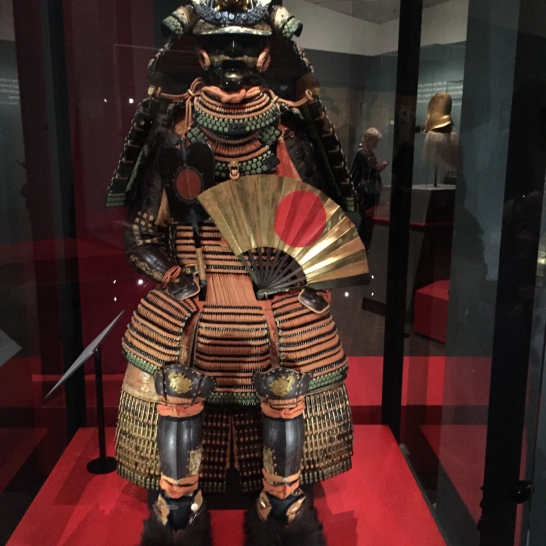 Fans were a signaling device to direct battle.

Vonnegut expounds on story device and logic.  From “Here is a lesson in creative writing”, he is funny, inspiring, creative, and thoughtful.  He ends: “And if I die–God forbid–I would like to go to heaven to ask somebody in charge up there, “Hey, what was the good news and what was the bad news?”” (p. 76)  OK, you have to read the whole thing.  It’s available on the LQ website if you search for Vonnegut and pick the right one.

Hamsun shares his writers block with us and Orwell I discussed in the first part of this review.

James Baldwin, at least a thrice contributor to L.Q., is as insightful as ever.  His extract, Wikipedia tells me it is fictional, is about a nightclub jazz performance.  What caught my eye was his descriptions of black people in the story:
“…an enormous black man”
“…a coal-black, cheerful-looking man”
“…the little black man”
“…very bright-skinned brown man”
“…The dry, low black man”

On the 6th floor of the DAM are a few Impressionist paintings in the Places exhibit. 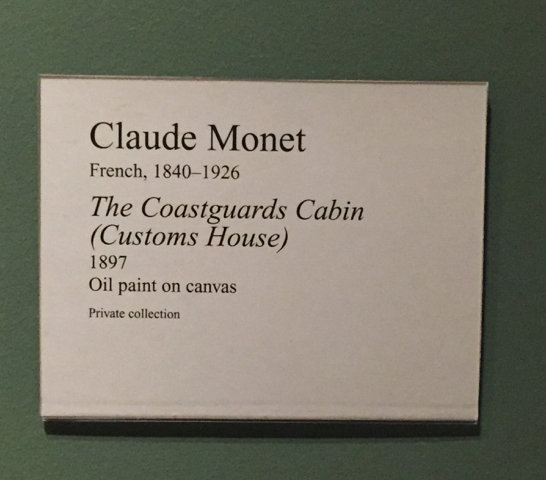 Suetonius, Van Gogh, a poem from Michelangelo, Raymond Chandler on screenwriting.  The list goes on.

Marcel Proust is superbly descriptive of the paintings of Elstir:
“…on the other side of the promontory on which the town was built the roofs were overtopped (as they might have been by chimneys or steeples) by masts which had the effect of making the vessels to which they belonged appear town bred, built on land, an impression reinforced by other boats moored along the jetty but in such serried ranks that you could see men talking across from one deck to another without being able to distinguish the dividing line…”.  (p. 97-98)

Wiki informs me the painter and paintings are fictional, made up by Proust. Beautifully done.

Shakespeare from A Midsummer Night’s Dream, to no surprise, escapes me as usual.  No ‘*’ for him, but the dreaded ‘?’.  All I can say is ‘what purpose this, prithee?’  I must read Shakespeare for Dummies sometime. I see there is one.

Aristophanes, even in English, drives me to my other frequent reference book, the dictionary:
strophe – first of a pair of stanzas
rutilant – bright red
flavescent – turning yellow
monodies – an ode for one voice or actor
bedizened – dressed in a showy or gaudy manner
actinic – a property of radiation
cuirass – breast and back armor
sonant – a voiced speech sound

Whew!  I feel like I’m writing a book again and I haven’t done section three or the extended essays yet. 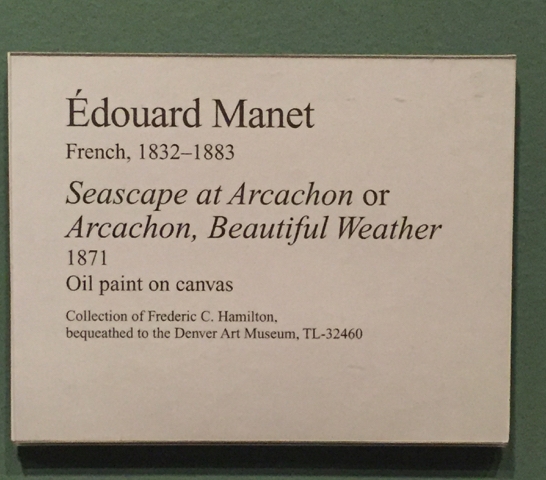 21 of 36 items in the Exhibition section gain the notable ‘*’ annotation.  The Chinese conflict on the importance of music.  Mozi, who lived not long after the death of Confucius, says c. 430BC “…making music is wrong!” (p. 143)  The Book of Rites c. 50BC, which ‘…exemplifies the Confucian emphasis on moral training and education’, says “Where there is music there is joy.” (p. 169)  I recently saw the GuGu Drum Group from Shanghai. (Outstanding, see them if you can.)  I think The Book of Rites won the argument.

Hitler is noteworthy if only for his facile naïveté.  “Cubism, Dadaism, Futurism, Impressionism, etc., have nothing to do with our German people: for these concepts are neither old nor modern, but are only the artifactitious stammerings of men to whom God has denied the grace of a truly artistic talent, and in its place has awarded them the gift of jabbering or deception.” (p. 142) 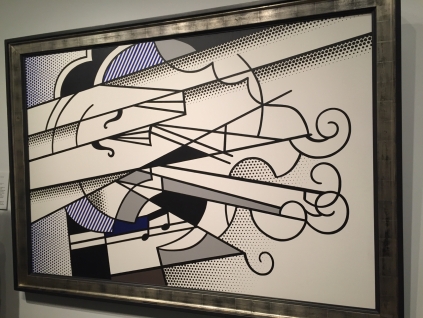 Wikipedia tells me Michel de Montaigne is ‘known for popularizing the essay as a literary genre’.  His extract on books is superb.
“Associations with friends and women are accidental and dependent on others.” … “Association with books is much more certain and more our own.” … “It is at my side throughout my course and accompanies me everywhere.”  “It consoles me in old age and in solitude.  It relieves me of the weight of a tedious idleness and releases me at any time from disagreeable company.” (p. 167)

Henry David Thoreau has a notable side quote on the Montaigne page:
“Write while the heat is in you.  The writer who postpones the recording of his thoughts uses an iron which has cooled to burn a hole with.  He cannot inflame the minds of his audience.” (p. 168) 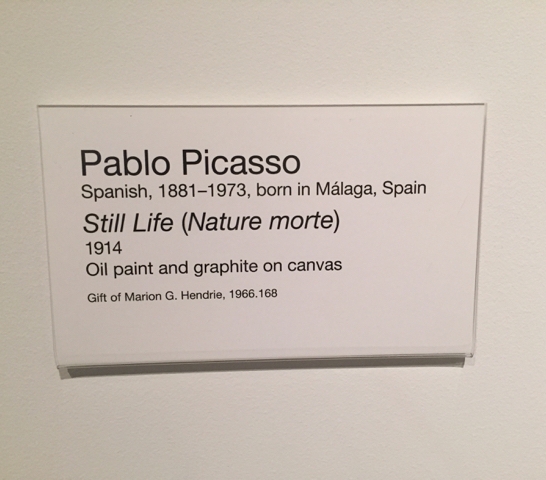 In the Further Remarks extended essays Salmon Rushdie enlightens us with the similarities between East and West in literary adventure themes.  He dwells on Amir Hamza, whose tales thereof have graced the pages of L.Q. in other issues, and the 1400 painting and text manuscript Hamzanama commissioned by Mughal Emperor Akbar.  (Thank you Wiki.)

A biography of Ezra Pound is next, a poet of whom I’ve heard but with whom I’m not familiar.  I am likely to remain that way. 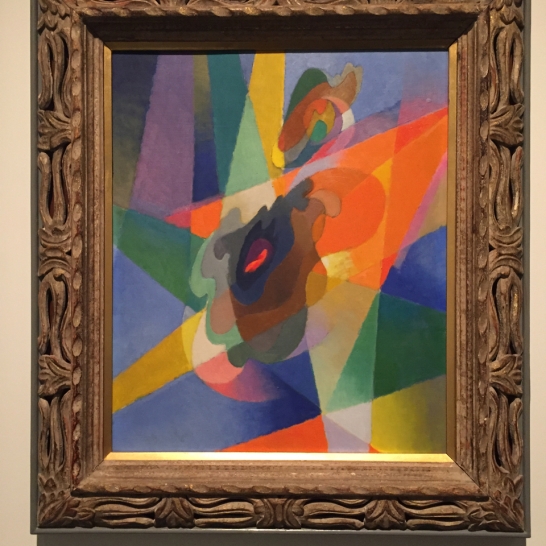 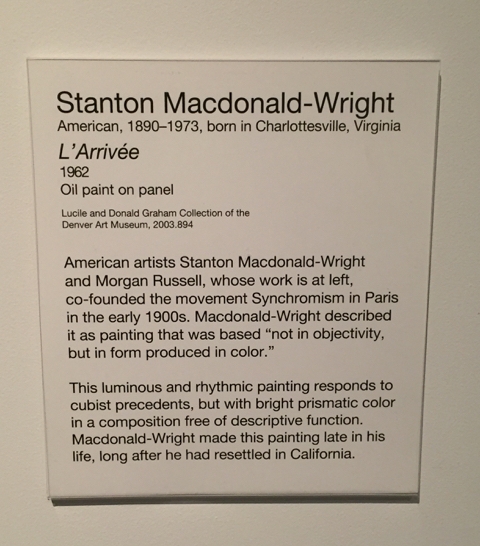 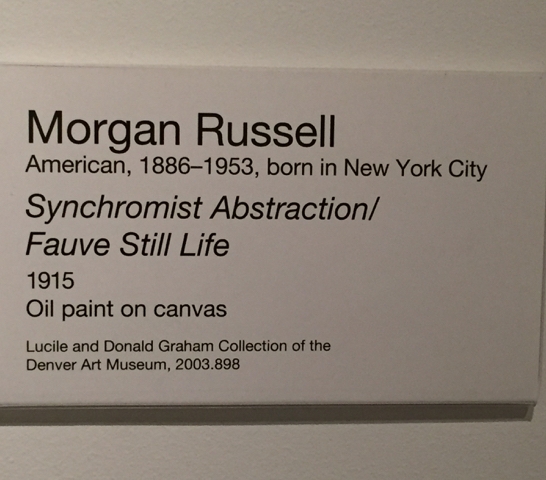 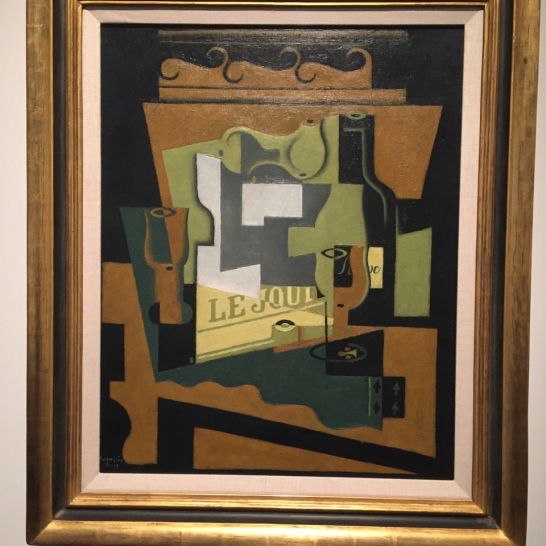 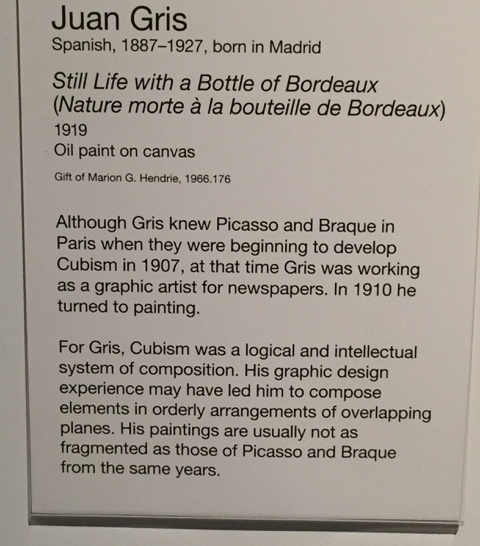 The third essay expounds on beauty in art focusing on the female form until it reaches the avant-garde modern art period and how said form becomes more prominent in popular media as it declines in art.  A bit cerebral for me.

Finally Sabiha Al Khemir discusses the use of Arabic script in place of iconic images in Muslim art.  She refers to the Danish cartoon images of Mohammed in 2005 but this essay is published in spring 2010, before the Charlie Hebdo cartoons in 2011 or the cartoon offices massacre in January 2015.  Noteworthy.

Done at last.  I expect my Spring 2016 issue to arrive shortly.  I’m late, I’m late, for a very important date.

[EDIT: I told you so.  Arrived same day as this posting.]