I said this special issue from Lapham’s Quarterly about Alexander Hamilton is going to be good and it is, or was. 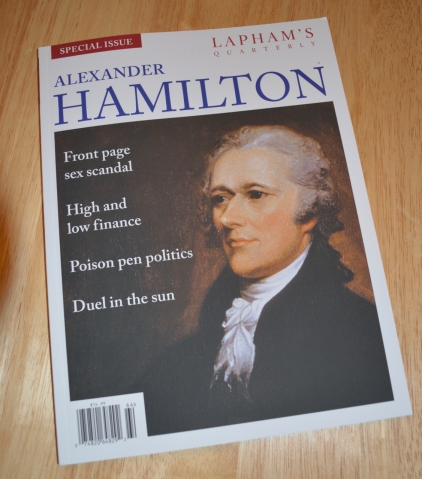 I read the issue in the space of a few weeks, with intermittent reading a welcome respite from the hectic business of assembling a humble domicile to protect one’s self from the fallout (virtual I trust) of a presidential election.  It was only 100 pages, rather than the usual exactly 221, 41 briefer than usual extracts, and 3 contemporary essays.

My overall impression is that it seems fragmented, but fragmentation is the Lapham’s Quarterly stock-in-trade.  L.Q.’s entire persona is extracts of written history throughout time on a particular general subject, the wisdom of the ages on Luck, Disaster, Youth, Time, Comedy, et al.

In Hamilton’s case the fragments are about a particular person, a more concise and focused subject.  Lewis Lapham notes in his Preamble “…history is not what happened… it is a story about what happened… every generation rearranging the furniture of its past to suit the comfort and convenience of its present.” (p. 7)  Thus the extracts are good, a perspective colored by the 260+ years since Hamilton’s birth.

The earliest piece, Hamilton’s own literate account of a hurricane in St. Croix (Hamilton was born in the Caribbean), earned him subsidy and move to the U.S. for education.  It seems like men matured faster then than now, circumstances a contribution no doubt, and in his early twenties during the Revolutionary War his bravery and command ability earned him the good graces of George Washington.

The first extract, by Matthew Peppe in an August 2016 blog, sets the stage:

“The problem with Miranda’s reading of history [Hamilton playwright Lin-Manuel Miranda, inspired by Ron Chernow’s biography of the subject -JH] is that is assumes a united nation, devoted to common goals of freedom and equality, was any more real 225 years ago than it is today.  Post-revolutionary America was never a utopia where everyone shared financially in the spoils of independence.  It was a political association organized along the lines of feudal societies and their stark divisions between creditors and debtors.” (p. 11)

“A wealthy colonial elite had managed through a coordinated campaign to enlist the poor to fight to overthrow British rule.  They were paid in worthless paper they would later sell to speculators for a fraction of its face value after returning to their farms.  The landholders and mercantile class had sat by as the “exceedingly dirty and nasty people” (in George Washington’s words) did the real work of fighting a brutal war.” (p. 12)

“…Miranda’s musical presents a liberal ideal of Hamilton that fits the propaganda needs of the present-day American empire.  Ignored are social and economic forces that, since the founding of the United States, have kept the elite rich and the landless poor.” (p. 13)

Peppe’s full version enlightens further as to just how elitist and debt-oriented was Hamilton.

Hamilton was a contributor to The Federalist, which ‘promoted the ratification of the United States Constitution’ (Wikipedia).

Charles Bowers in his 1925 book Jefferson and Hamilton: The Struggle for Democracy in America, which it’s said ‘helped revitalize Jefferson’s reputation’, is somewhat disparaging of Hamilton while Amazon calls Chernow’s biography ‘hagiographic’ (adulatory).

“As a party leader, Hamilton was singularly lacking in tact, offensively opinionated, impatient, and often insulting to well-meaning mediocrity, and dictatorial.  He did not consult–he directed.  He did not conciliate–he commanded.  [Sound like anyone we know this election year? -JH]  In the cabinet he was to offend Jefferson early because Hamilton “could not rid himself of the idea that he was really the prime minister.””

“There was much of egotism and some vanity behind this dictatorial disposition.  This was inherent and incurable.  The lowliness of his origin and the phenomenal rapidity of his rise, the homage properly paid him for the brilliancy of his youthful efforts with voice, pen, and sword, all tended to convince him of his superiority.”

“A marvelous genius, he thought in terms of world politics at a time when America was creating a new spirit and system of her own.  It was not to weaken his work as the creator of credit, but it was to dim his vision as an American leader.” (All p. 22)

Bowers’ older 500-page tome might be a noteworthy complement and juxtaposition to Chernow’s 800 pages.  Alexander’s grandson’s 1910 extract (p. 18) and biography are kinder than Bowers.

Speaking of disparage, Hamilton and Adams (John) have a go at each other in dueling extracts.  Shades of things to come.

William Hogeland’s piece on The Whiskey [tax] Rebellion is informative, as is Wikipedia.

“The goal was industry consolidation.  Hamilton had learned from the English that commercial agriculture and large industry, when publicly chartered, given tax breaks, and financed by larger loads, might turn the United States into an industrial empire to compete with England’s… Big distilling had the potential, given American drinking habits, to be highly profitable–yet small, seasonal producers, especially in the west, competed with industrial distillers and kept revenues scattered, engines weak.  Hamilton’s whiskey tax didn’t merely redistribute wealth from the many to the few, subdue rural economies, and pound the restless, defiant west.  It also served as one of the heavier cogs in a machine for restructuring all of American life.” (p. 26) 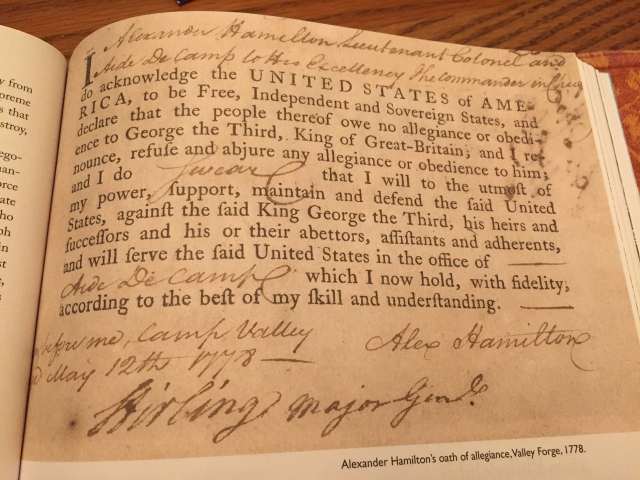 “Underlying the several aspects of Hamilton’s policy can be discerned a definite theory of governmental functions.  The central government is to be used not merely to maintain the Constitution, but to promote the national interest and to consolidate the national organization.”

“All this implied an active interference with the natural course of American economic and political business and its regulation and guidance in the national directions.”

“Hamilton succeeded in imbuing both men of property and the mass of the “plain people” with the idea that the well-to-do were the peculiar beneficiaries of the American federal organizations, the result being that the rising democracy came more than ever to distrust the national government.”

“It did not take Hamilton’s opponents long to discover that his ideas and plans were in some respects inimical to democracy, and the consequence was that Hamilton was soon confronted by one of the most implacable and unscrupulous opinions that ever abused a faithful and useful public servant.  This opposition was led by Jefferson…”

“Jefferson was filled with a sincere, indiscriminate, and  unlimited faith in the American people.” “…as a democrat he fought most bitterly what he considered to be the aristocratic or even monarchic tendency of Hamilton’s policy.”  “…their unscrupulous and unfair tactics established a baleful tradition in American party warfare.”  “…while Hamilton toward the end of his life lost his influence, the consequences of Jefferson’s imperfect conception of democracy have been much more serious than the consequences of Hamilton’s inadequate conception of American nationality.  In Jefferson’s mind, democracy was tantamount to extreme individualism.”  “…politically, the prime object was to provide for the greatest satisfaction of its individual members.”

“…Hamilton’s political philosophy was much more clearly thought out than that of Jefferson. …he wished, like the Englishman he was, to protect and encourage liberty, just as far as such encouragement was compatible with good order…”  “But he also realized that genuine liberty was not merely a matter of a constitutional declaration of rights.  It could be protected only by an energetic and clear-sighted central government, and it could be fertilized only by the efficient national organization of American activities.”  (All pp. 48-50)

Both men sound quite idealistic to me.  Well and good to have lofty ideals.  Have we been successful in applying them? 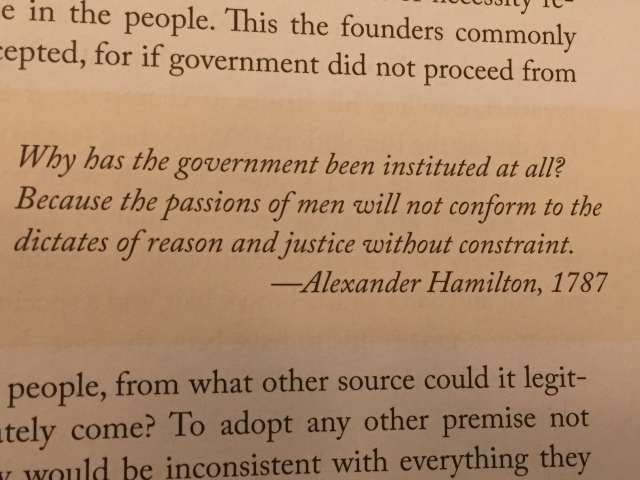 The three final contemporary essays are noteworthy.  The first, The Aristocracy of Capital, is a lengthy discussion of the arguments for structuring the fledgling government and its finances.  The second is an account of Hamilton’s affair with a married woman.  The third, War of Two, addresses his demise at the hands of Aaron Burr in a duel.  Hamilton’s contemplation of throwing away his first shot seems almost suicidal in light of the fact that his son was killed in a duel while applying just such advice from his father.  Apparently honor was highly valued, a novel idea, and a man’s words were considered as sharp as his sword.

Is there an audience for snapshots of famous people in this format?  I say yes.  It’s more than a Wikipedia entry, less than a biography.  In the case of Hamilton and the Founding Fathers it seems like it’s always a good time to reflect on the origins of this fragile republic. Lest we forget.

11 Responses to Hamilton has arrived, Pt. II and Last