[CATEGORIES: Literature, Lapham’s Quarterly, Reading, Book Review]
[Click HERE to see my previous posts referencing Lapham’s Quarterly.]
[Some of LQ’s contents are available free.]
[L.Q. cover and images from L.Q. Winter 2018: States of Mind]
[New to Lapham’s Quarterly? See the standard notes at the end of this review. After 40+ LQ reviews I jump right in.]

That strange phenomena, thinking.  It is strange, don’t you think?

As a commenter of pt. 1 noted, “Aren’t we fortunate to have the leisure to just “think”.” That thought had occurred to me also, independently.  Hmm.

It would appear that pondering one’s existence through most of the ages has been the luxury of philosophers, kings, and queens, though no doubt the slave, soldier, and peon, wiping sweat from fevered brow, wondered what sort of existence he had stumbled into. 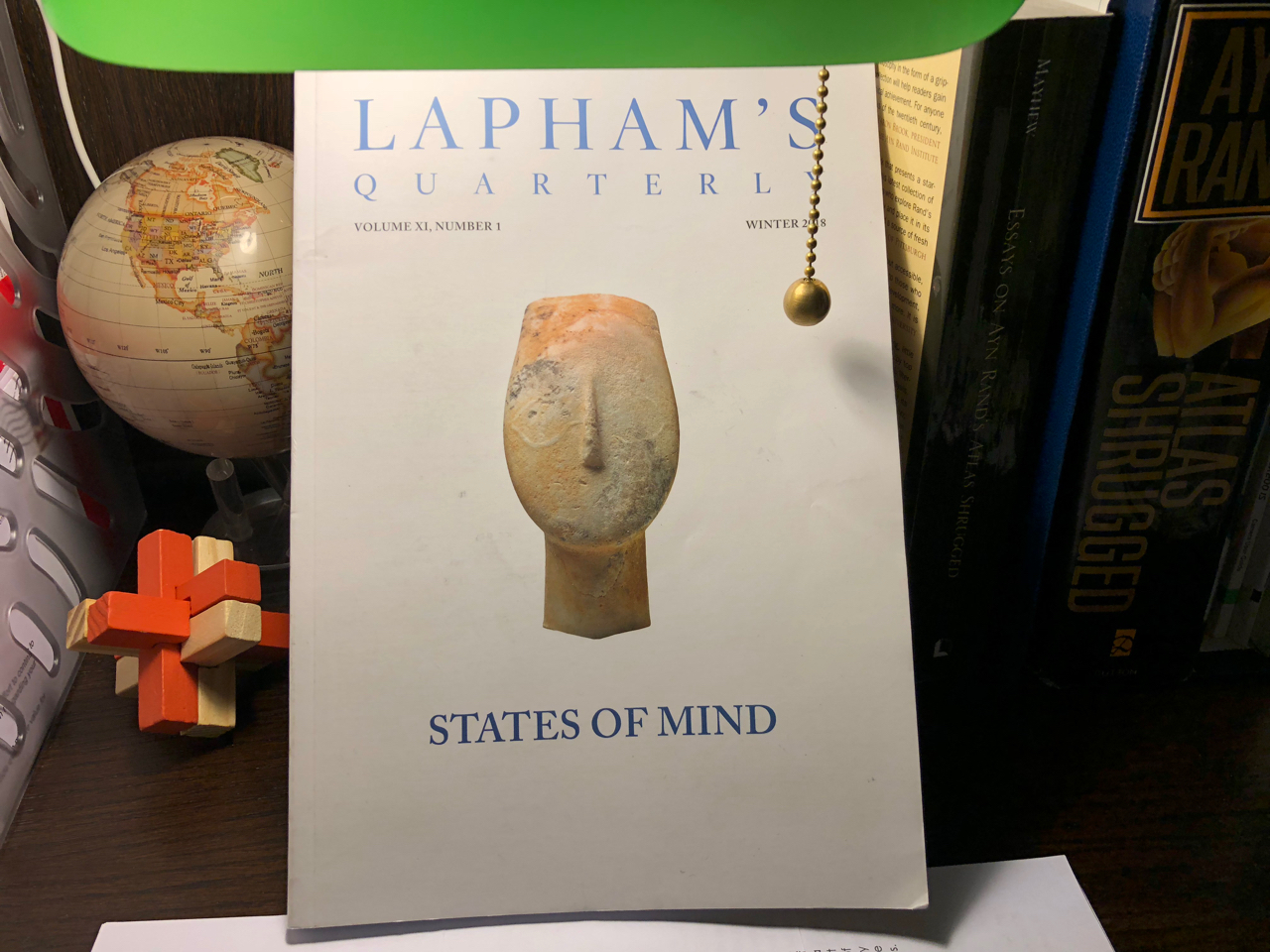 Paraphrasing, when a young Alan Greenspan posited to Ayn Rand that “I don’t know if I exist”, she replied “Who is it that is thinking that?’

If I had to choose a singular fact from this issue to highlight, it would be “…we do know there are around 86 billion neurons in the brain.  Each neuron has on average seven thousand synaptic connections.  That makes the brain the most complex object in the universe, as it is often said.” (Noga Arikha, p. 194) (Compare to computer chips, both CPUs and GPUs: https://en.wikipedia.org/wiki/Transistor_count ) (Want to know more? Try Neuroscience For Kids.)

Not only are we connected, however that works, but we created and evolved languages to express our thought and imagery.  Were it not for shared symbolism we wouldn’t ‘think’. If you google “the number of languages in the world” you can find references such as:

“The Ethnologue catalogue of world languages, which is one of the best linguistic resources, currently lists 6909 living languages. About 6% of them have more than a million speakers each, and collectively account for 94% of the world population. On the other hand, about half of the languages are spoken by fewer than ten thousand people, and about quarter have fewer than one thousand speakers.” http://www.education.rec.ri.cmu.edu/fire/naclo/pages/Ling/Fact/num-languages.html

and:
The top 100 languages account for about 5.6 billion people.
https://en.wikipedia.org/wiki/List_of_languages_by_number_of_native_speakers

Don’t get me started on creativity and how ideas seem to pop into our head like little bubbles rising to the surface of a liquid and popping into the air. 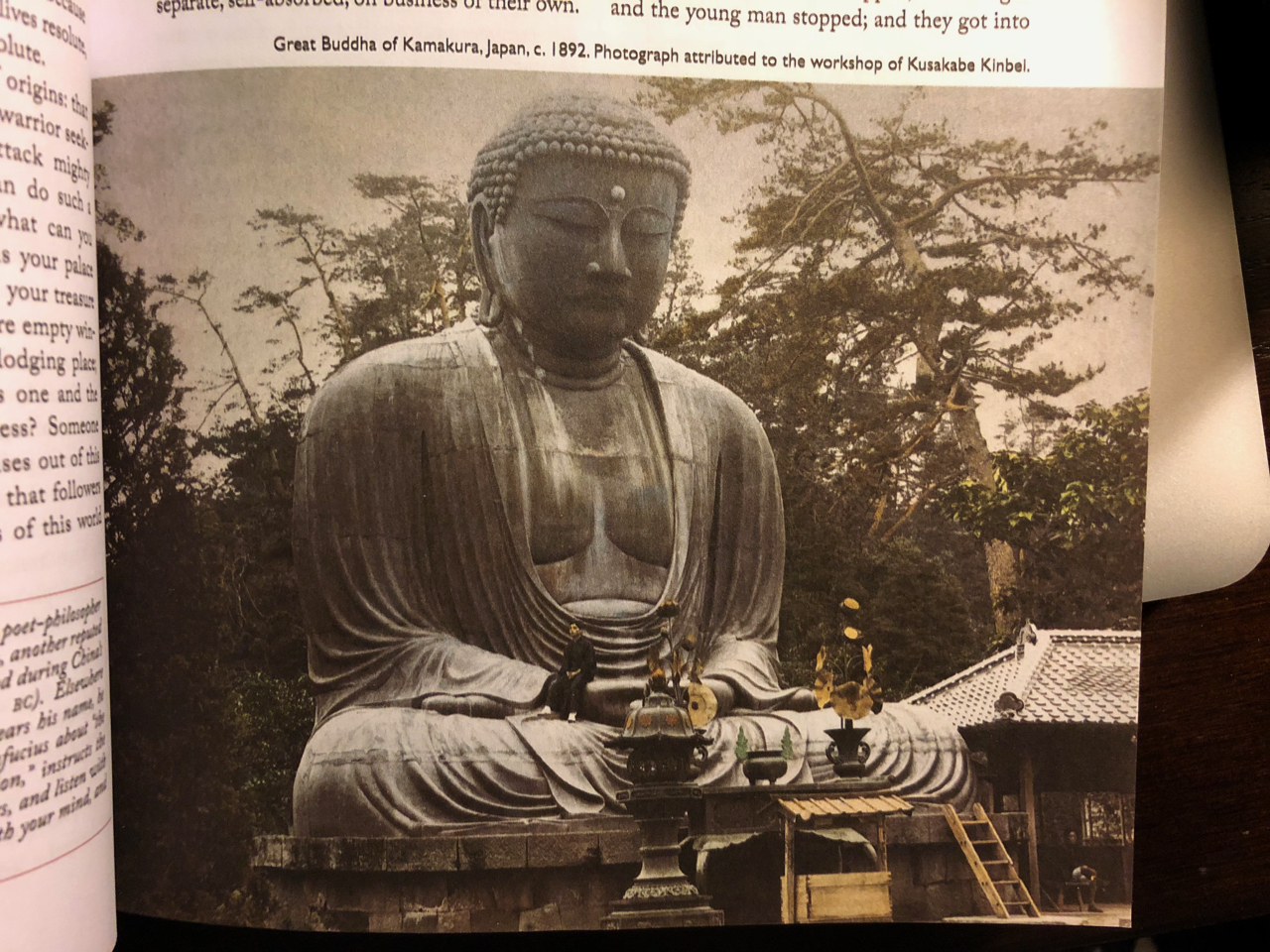 “O Aristotle! If you had had
the advantage of being “the freshest modern”
instead of the greatest ancient, would you not
have mingled your praise of metaphorical
speech, as a sign of high intelligence, with a
lamentation that intelligence so rarely shows
itself in speech without metaphor—that we
can so seldom declare what a thing is, except
by saying it is something else?” (p. 44)

‘…we can so seldom declare what a thing is, except by saying it is something else?’  Food for thought.  (A metaphor?)

“…a man might observe the display of various or special knowledge made by irregularly educated people with a pitying smile; all that sort of thing was very well, but it was impossible these people could form sound opinions.” (p. 43)

I often feel like a random-generated fact machine, spouting answers, or questions as it where, like I was responding to the Jeopardy game on tv.  “Who was Leonard Sly?!”  (What was Roy Rogers’ given name.)  Can I expound on theory and concepts?  No better than “…”the masses,” who are now understood to have the monopoly of mental darkness…” (p. 44)

As always, Wikipedia beckons and enlightens on Ms. Eliot/Evans and her novels such as The Mill on the Floss and Silas Marner.  Her brief extract is this issue is generously available online at LaphamsQuarterly.org as:

The three sections of Voices In Time this issue are:

Cognition
(The mental process of knowing.  Acquiring knowledge and understanding through thought, experience, and the senses.)

Consciousness
(A sense of one’s personal identity.  Being aware.  Awareness by the mind of itself and the world.)

(Definitions are my dictionary paraphrasing.)

As always the extracts, 80 this issue, are thoughtful, insightful, contemplative, provoking inquiry, inviting inquisition.  Not as many earned my coveted double- or triple-asterisk annotation, but to find the nuggets one must sift a lot of creek sand, and it is good quality sand, the kind that will make you THINK as it flows past all those neuronal synapses.

A few of my favorites:

Allow Me to Enlighten You
1897 | Washington, DC

by Alexander Crummell (free online)
This is a 19th century plea for recognition of intellect in black people, written by a black man.  Well said.  Will we ever understand Man’s alienation or cruelty of other men?  One can only hope.

In 1641 Descartes is thinking, deeply thinking.  He doesn’t quite say “Je pense, donc je suis” as he did in the 1633 French-written Discourse on the Method, or “ego cogito, ergo sum” as he did in the 1644 Latin-written Principles of Philosophy, (thank you Wikipedia) but he’s close.

“So after considering everything very thoroughly, I must finally conclude that this proposition, “I am, I exist,” is necessarily true whenever it is put forward by me or conceived in my mind.”
“…I know that I exist; the question is, What is this “I” that I know?” (p. 51)

Regardless of how it is said, when you say it, who is it that is saying that?

“Thucydides laid down this law very well: he
distinguished virtue and vice in historical writ-
ing, when he saw Herodotus greatly admired to
the point where his books were named after the
Muses. For Thucydides says that he is writing
a possession for evermore rather than a prize
essay for the occasion, that he does not wel-
come fiction but is leaving to posterity the true
account of what happened. He brings in, too,
the question of usefulness and what is, surely,
the purpose of sound history: that if ever again
men ﬁnd themselves in a like situation, they
may be able, he says, from a consideration of
the records of the past to handle rightly what
now confronts them.” (p. 55)

Other than 1,850 years or so, the following doesn’t seem far removed: from p. 284 of George Santayana’s 1905-1906 The Life of Reason, Vol. I, Reason in Common Sense, Chapter XII, Flux And Constancy In Human Nature: …”when experience is not retained, … infancy is perpetual. Those who cannot remember the past are condemned to repeat it.” (Project Gutenberg)

Katsuki Sekida’s piece from Zen Training is superb.  He notes that our absorption into a task can result in our loss of the sense of time, similar to absolute samadhi in which “…there is no time.  “No time” means there is only the present time.” … “Present, present, present.  This present time is interrupted if a reflecting action of consciousness occurs. You reflect on your thought and recognize the difference between the moment ago and this moment.”  (p. 67)

Isaac Asimov is superb also, with an extract from his short story The Last Question and characters such as Zee Prime and Dee Sub Wun.  Humor me, and muse yourself.  Read this, starting with Chapter 4, in a reproduction of the pulp magazine version here:

Sy Montgomery has an excellent piece on the sentience of octopuses.  (NOT octopi!)  It’s not available online but there is a portion that can be read here:

The Soul of an Octopus Excerpt

Octopuses, whales, elephants, dolphins.  What are they thinking?  I think they are thinking something. 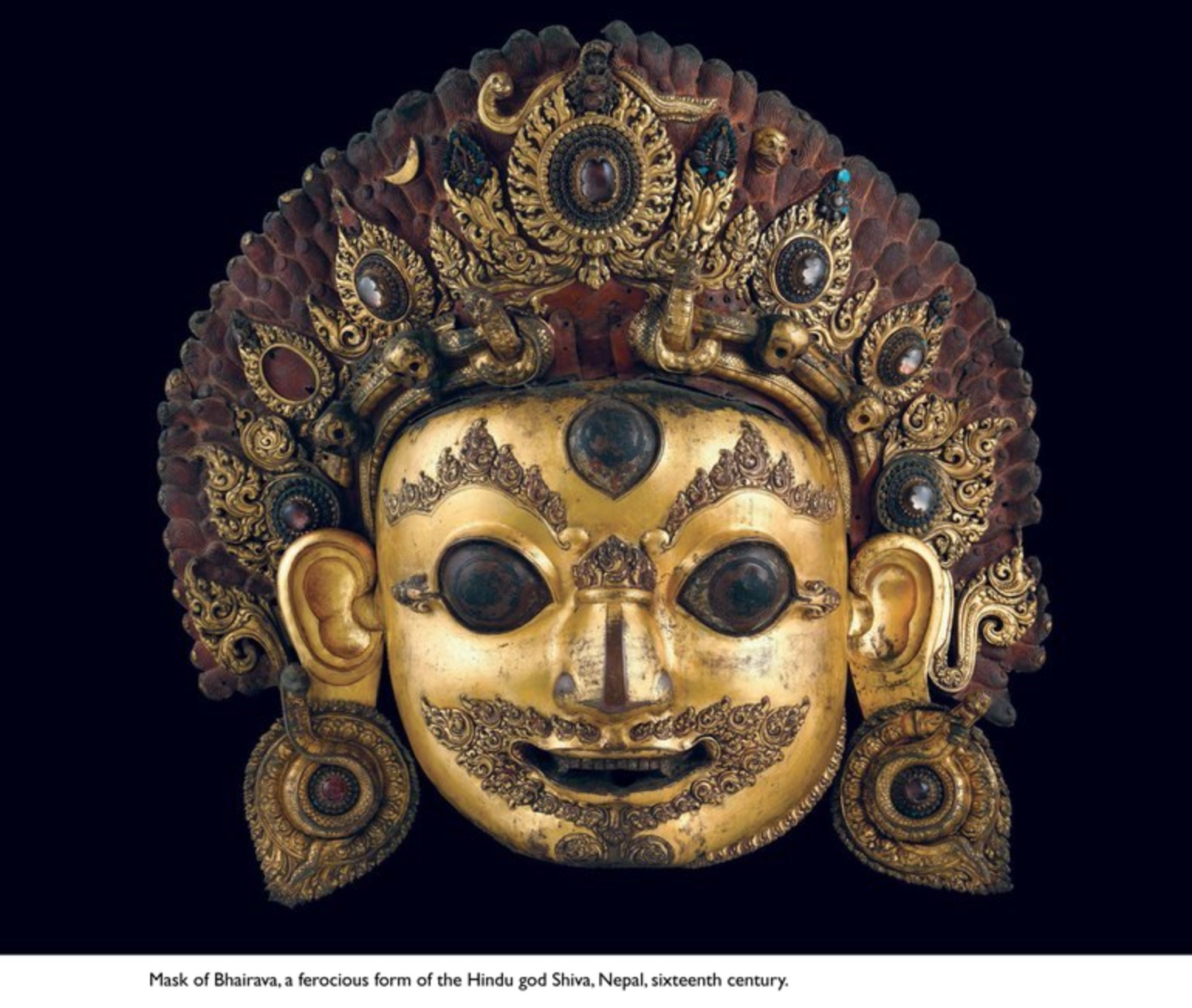 Daniel Ellsberg is here, giving advice to Henry Kissinger.  Coincidentally I recently saw the movie The Post, about the publishing of The Pentagon Papers stolen by Ellsberg. Excellent movie, at least for an American audience and others familiar with the Vietnam era incident.

A couple of thought-provoking extracts are available online:

Remembrance of Things Past
1759 | London

All four complete concluding essays are available online, of which I particularly recommend The Person In The Ape by Ferris Jabr.

“Members of all species apart from our own are typically regarded as property–as things.” (p. 188)
“Looming beneath the legalities is a more profound philosophical question with urgent moral implications: What does it really mean to be a person?” (p. 189)

I conclude with a few side-quotes, of which many are notable this issue.

“What the brain does by itself is infinitely more fascinating and complex that any response it can make to chemical stimulation.” –Ursula K. Le Guin, 1971 (p. 176)

[I received an email notice about this issue.  “In States of Mind, Lapham’s Quarterly explores the brain, the soul, and consciousness itself—how they connect and where they diverge.”  That explains it better. Forget everything I just said.]