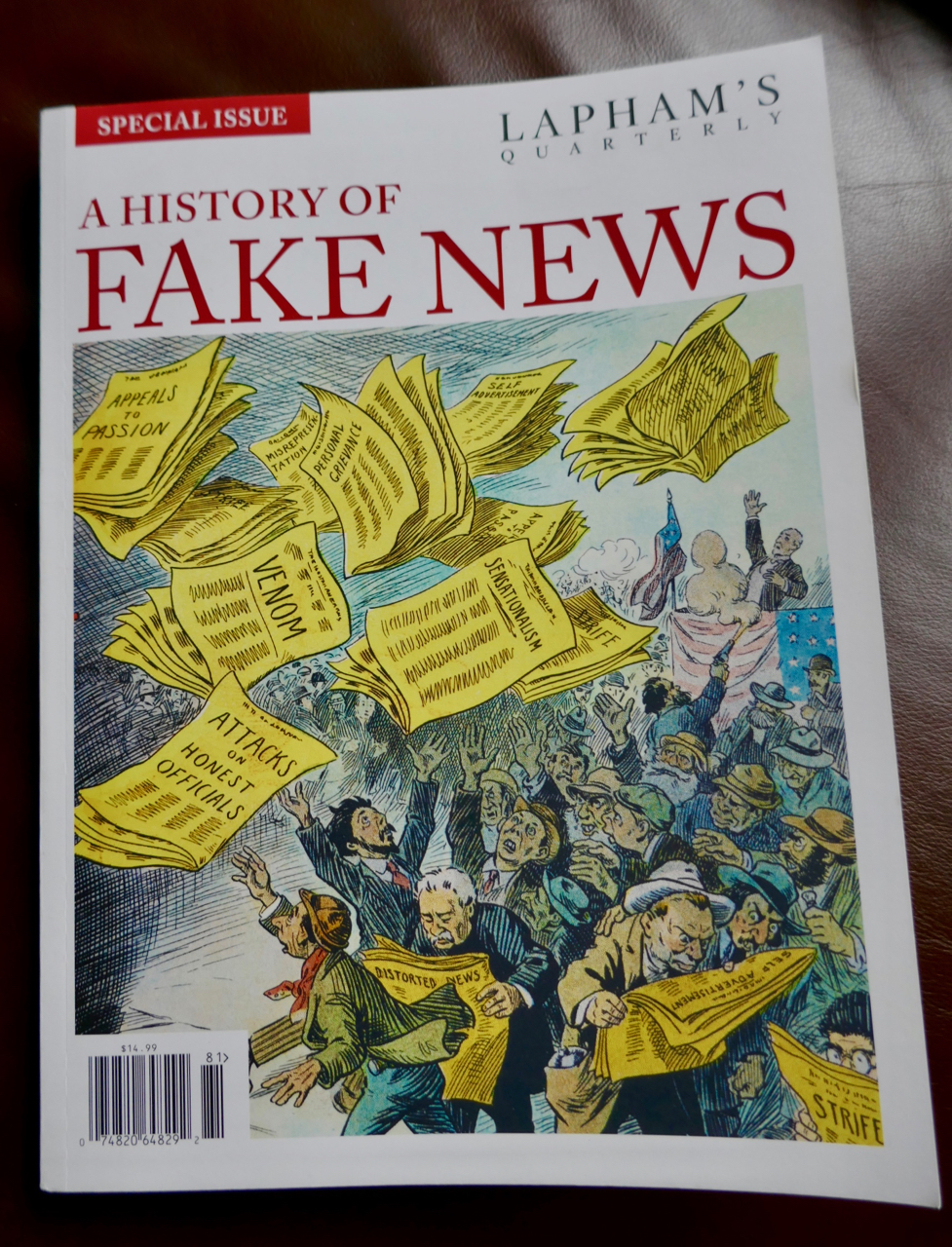 Fake News is all the rage these days.

As this 8 1/2 x 11”, 95-page issue shows, fake news is not new.  From Plato and Virgil through Machiavelli, Swift, Flaubert, Twain and Nietzsche to Woolf, Sayers, Goebbels (Gerbils?!) and Gore (Vidal), everyone has something to say.

29 historical extracts, 4 full essays, and a brief Preamble from Lewis Lapham are contained within.

Woolf’s extract (dated 1938) is a fictional passage in her non-fiction novel-essay Three Guineas, asking “some daughter of an educated man who has enough to live on and can read and write for her own pleasure, and taking her to be the representative of what may in fact be no class at all…”.  (p. 12) Double entendre perhaps?  Touche’.

The passage goes on to extol truth in reporting, and how we would choose art over war if truth be told.  “…if newspapers were written by people whose sole object in writing was to tell the truth about politics and the truth about art, we should not believe in war, and we should believe in art.” (p. 13)

Other extracts note that newspapers have always been biased.  Mark Twain is quoted in the info box to his extract: “It has become a sarcastic prover  that a thing must be true if you saw it in a newspaper,” Twain said in 1873.  “That is the opinion intelligent people have of that lying vehicle in a nutshell. But the trouble is that the stupid people–who constitute the grand overwhelming majority of this and all other nations–do believe and are molded and convinced by what they get out of a newspaper.” (p. 32)  He didn’t mean you and me of course. 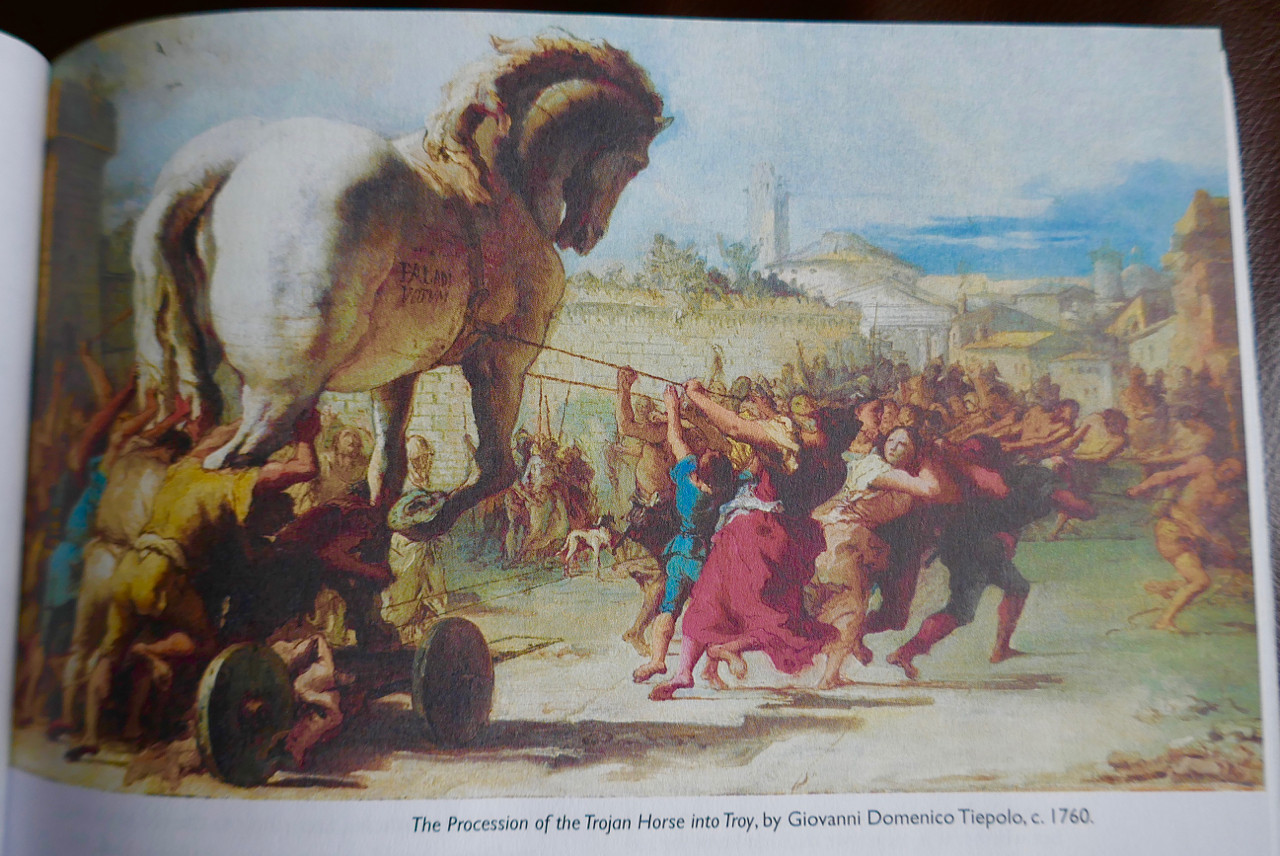 He mentions “…the good looks and amiability of the cast, their pleasant banter…”.  I have marveled for decades at the ability of newscasters to relate with a calm, straight expression the sordid details of every imaginable and unimaginable horror that occurs and then a few minutes later cheerfully discuss the latest local picnic or pets race.  Good times all around! I’ve sometimes thought of starting the Depressing News Service, with a very stern looking reporter imploring you to understand the gravity of various perilous situations.  You’re right.  No one would watch, thus no one would pay to advertise and support such an enterprise.  Never mind.

Matt Taibbi is sadly hilarious on the Trump phenomena.  “The Trump presidency is like a diabolical combination of every schlock eyball-grabbing formula the networks have ever deployed.” “This presidency has become the ultimate ratings bonanza.” (p. 40)  Among my marvels too are how the press is so reactionary to Trump’s slightest nuance.  He whispers ‘boo’ and the news papers and shows run amok.  ‘OMG!!’  ‘Heee’s CRAZY!!’  There must be many like me who are resigned to the chaos and committed to self-preservation during and after the Trump Error, I mean, Era.  I just hope that if he meets with Kim Jong Un they don’t start bitch-slapping each other.  Or maybe they should?

Machiavelli’s piece from The Prince, sub-titled by LQ: The Importance of Being Deceptive, is insightful as always.  “…princes who have achieved great things have been those who have given their word lightly, who have known how to trick men with their cunning, and who, in the end, have overcome those abiding by honest principles.” (P. 41)  Words to live by, for Princes and Politicians I suppose. 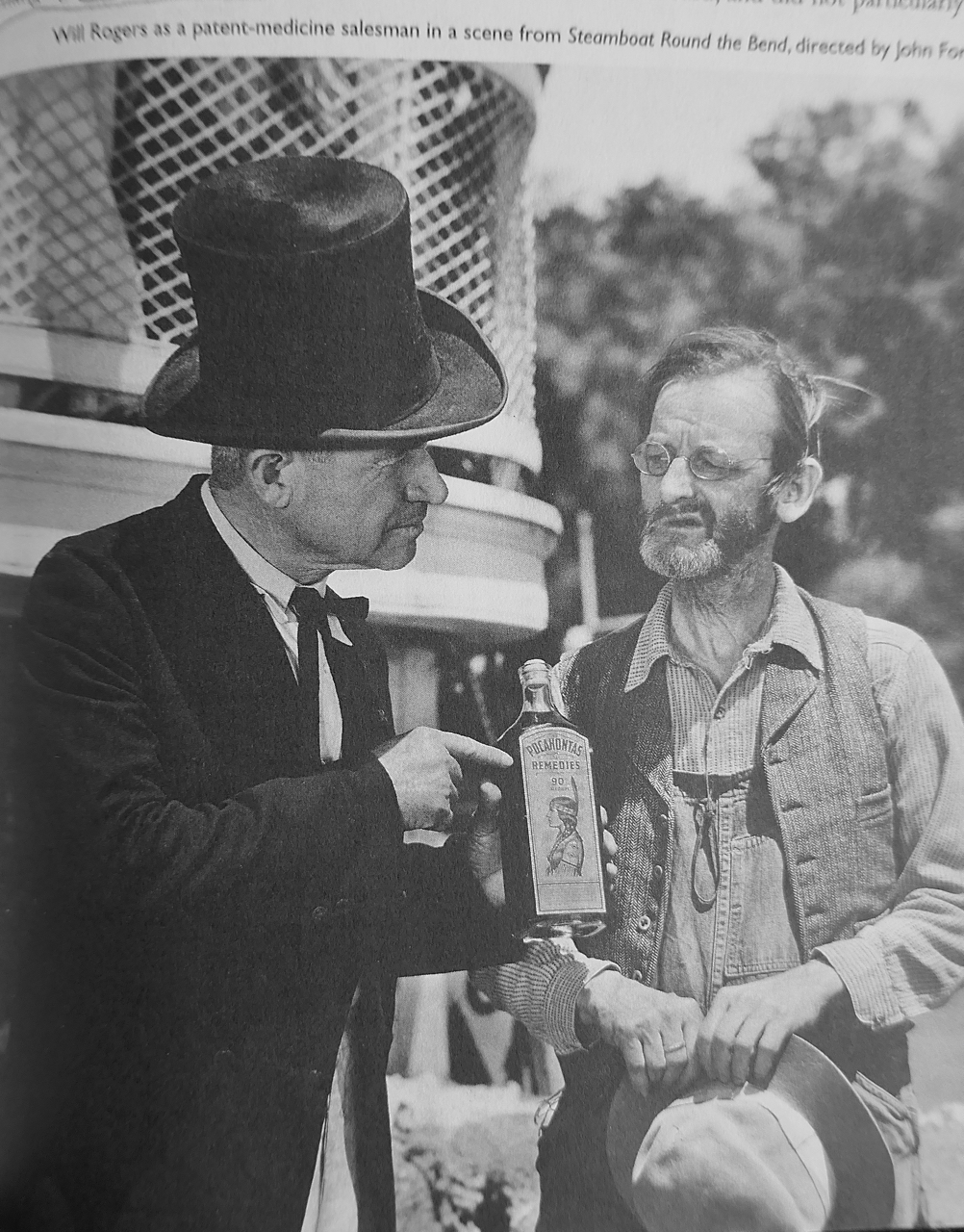 Trump, Machiavelli, and next Goebbels.  Someone had inertia in this section.  The Propagandist of Hitler’s Third Reich.  I feel my arm straightening and stiffening, not unlike Dr. Strangelove.  I trust it is not a heart attack.  “All practical politics depends on how persuasive it is to the people.  It is no sign of wise leadership to acquaint the nation with hard facts overnight.  Crises must be prepared for not only politically and economically but also psychologically.  Here propaganda has its place.”  “It may be good to have power based on weapons.  It is better and longer lasting, however, to win and hold the heart of a people.” (p. 43/44)  I’ve heard of religious, god-fearing people touting lengthy lists of Trump’s accomplishments.  I suspect if I ask them about his not-so-small peccadilloes they will reply “FAKE NEWS!”.

“The whole hierarchical structure of totalitarian movements … could be described in terms of a curiously varying mixture of gullibility and cynicism with which each member … is expected to react to the changing lying statements of the leaders and the central unchanging ideological fiction of the movement.” (p. 21)

“The totalitarian mass leaders based their propaganda on the correct psychological assumption that … one could make people believe the most fantastic statements one day, and trust that if the next day they were given irrefutable proof of their falsehood, …instead of deserting the leaders who had lied to them, they would protest that they had known all along that the statement was a lie and would admire the leaders for their superior tactical cleverness.” (p. 22)

The four full essays at the end, all by contemporary, living authors, reinforce the premise.

Amanda Robb’s analysis of Pizzagate (an armed man invades a pizza shop Dec. 2016 looking for a Hillary Clinton pedophile ring) shows the extent to which people will believe ANYTHING.  I am not a Clintons fan, but seriously?  The internet is truly the ozoned ether-net.  Robb shows how people grasp at the thinnest filament of blather and drive it through sheer repetition into some remote, but fake, resemblance of reality.

Paul Maliszewski has a piece on the ‘people on the moon’ hoax of 1835.  I found it noteworthy that he does not have a page on Wikipedia. 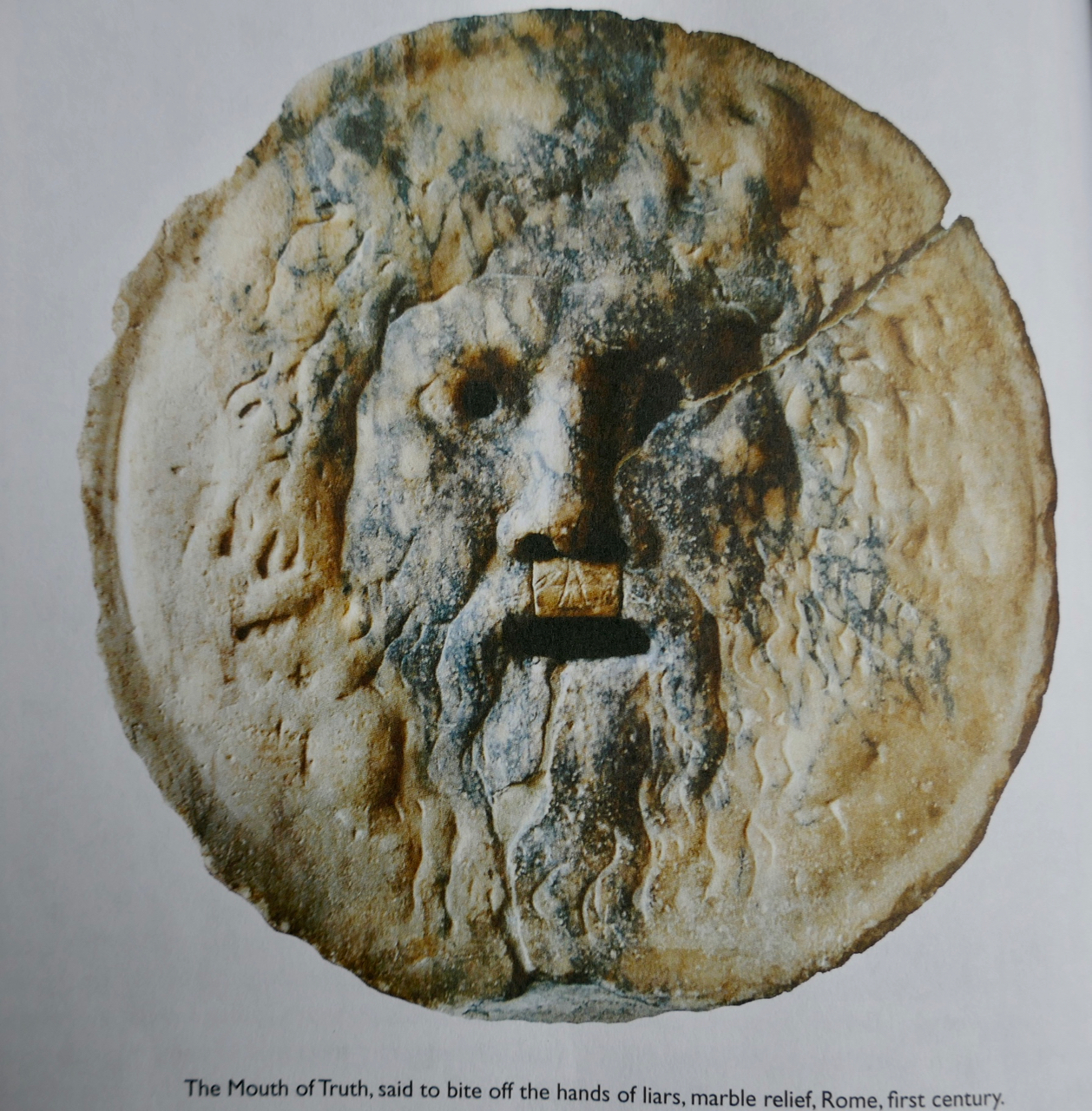 To summarize, perhaps we should refer to the quote prefacing Lewis Lapham’s Preamble, Advertisements For Reality:

“I really look with commiseration over the great body of my fellow citizens, who, reading newspapers, live and die in the belief that they have known something of what has been passing in the world in their time. –Thomas Jefferson (p. 3)

Read everything, believe nothing, make your own decisions and judgements.  At least you will not be cattle.