(Brevity, still brevity. A commentary, more than a review.  I pale, even cower, in the lengthy shadows of real reviewers like the NYRB.)

This man can WRITE.

Too brief?  Here is more:

Invisible Man, not THE Invisible Man.  The book and author have been on my To Read list since I read extracts of his work in the historical journal Lapham’s Quarterly. (Fall 2012, Summer 2015, Summer 2016.)

They were well-written, literate, and eloquent.  They were eloquent not for a black writer, but for any writer.  The pathos struck a chord within.  The ‘black experience’ of segregation was stunning, almost unbelievable and other-worldly.  It is a work of fiction, but it gave one a sense that this is real-world talkin’, not fantasy.  Man’s inhumanity to man was revealed yet again.  I wanted to read more so I acquired the audiobook. 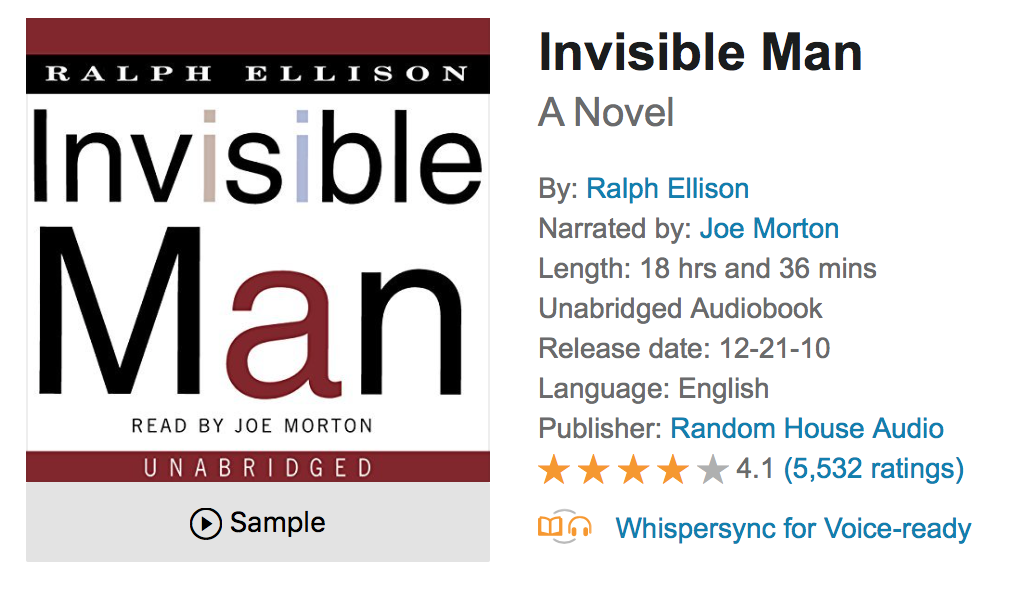 I found more of what I had read before.  I was disappointed that there was an act of violence portrayed so quickly, not against the black man, but an act of Ellison’s black protagonist against a white man who had bumped into him, perhaps accidentally, but because he, the black man, thought he was not seen, not acknowledged, invisible.

Are we to fear the black man, and subsume to the prejudices and stereotypes?  One wonders in 2018 if black or white, brown or yellow or red, have made any progress at all in accepting one another as humans.  I feel we teeter on the edge of chaos.  (I sometimes think I feel that about everything, sigh.)  Perhaps the youngers are blending.  Mixed marriages, mixed genders, a stewed morass that will hopefully outlast the murderous amongst us, hoodied or uniformed, tatted or badged, lost souled or devoutly righteous.

What can we learn from Ellison?

As asides, there are:

His smoking a reefer, a habit he finds he doesn’t care for and doesn’t pursue, is amusing.  Tripping, man.

Also intriguing is his usurpation of free electricity from ‘Monopolated Power and Light’, what he calls his power company.

There are larger lessons.

Continuing, I’m barely into Chapters 3 and 4 and there is more violence, this time a youth boxing melee of black kids for the sadistic amusement of rich white guys in whatever Southern town he is growing up in.  One can only imagine, beyond what he portrays, Man’s inhumanity to blacks.

His eloquence comes forth as he makes it to a black college and is driving one of the white founders around the countryside, having a conversation.  He says, to paraphrase, “…the shingles were scattered across the roof of the old cabin like a deck of wet card laid out to dry…”.  (Actually: “Sun-tortured shingles lay on the roofs like decks of water-soaked cards spread out to dry”.) Wow.  Who would think up metaphors like that.  (Ellison can.)  I’ve got to find a written version, as one problem with audiobooks is you can’t bookmark them and later copy and paste. (I found written, thus the verbatim.)

He relates a lengthy conversation with a dirt farmer, who is excusing himself for his incestuous impregnation of his daughter.  For a dirt farmer, he weaves an eloquent defense, if such an act can be defended, let alone excused.

A bit down the road this conversation leads to a brawl in a backwoods black bar, which leads to my main complaint with the audiobook version.  It’s too well done!  The author’s speaking parts are written in the vernacular and dialect of the speakers, such as:

“Git the hell out of the way,” Halley said. “Somebody git that stool-pigeon attendant from upstairs. Git him down here, quick!”

“How you gon keep order in the place if you gon git drunk?”

The audiobook narrator, like other audiobooks I’ve listened to, changes his voice to an interpretive mimic of the character speaking.  (I thought the 50+ hour audiobook of Atlas Shrugged was done quite well in this respect.)  This mimicking must take a huge amount of preparation, practice, reading and re-reading.  I commend the herculean effort.  In this book, however, I felt the narrator was overly exuberant and dramatic.  Save for the absence of background sound effects this could have been the soundtrack for a movie or radio show.  It was just too much for me, eventually grating on my senses to the point that I acquired the written book and read that for the remainder, very satisfactorily.

In the blackwoods bar Ellison is not without his sense of humor too:

“What is wrong with this gentleman, Sylvester?” the tall one said.

“Someone is always dying,” the other one said.

“Yes, and it’s good to die beneath God’s great tent of sky.”

“He’s got to have some whiskey!”

“Oh, that’s different,” one of them said and they began pushing a path to the bar. “A last bright drink to keep the anguish down. Step aside, please!”

Buffeted by the vagaries of fate, the protagonist finds himself in Noo Yawk City, Harlem, in the 1940s era I presume, as zoot suits are mentioned. Per Wikipedia the book was published in 1952 and won the U.S. National Book Award for Fiction in 1953.

Buffeting continues for the remainder of the book.  Remaining nameless for the entire novel, opaque man finds he has a gift of speech for stirring the masses and allows himself to be used for that end in Harlem.  The stirred, stirrer, and manipulation of both by the Brotherhood finally devolves into a full blown race riot.  I was curious of his actual experience with this and found that the Harlem riot of 1943 may have ‘inspired’ Ellison.

This is an excellent story, worthy of thought.  Ellison is a master of metaphor and poetic description.  Following are excerpts from a single page chosen at random, first ‘toss of the dart’:

“A huge iridescent bubble seemed to enfold me. Gentle hands moved over me, bringing vague impressions of memory. I was laved with warm liquids, felt gentle hands move through the indefinite limits of my flesh. The sterile and weightless texture of a sheet enfolded me. I felt myself bounce, sail off like a ball thrown over the roof into mist, striking a hidden wall beyond a pile of broken machinery and sailing back.”

“Faces hovered above me like inscrutable fish peering myopically through a glass aquarium wall. I saw them suspended motionless above me, then two floating off, first their heads, then the tips of their finlike fingers, moving dreamily from the top of the case. A thoroughly mysterious coming and going, like the surging of torpid tides.”

Put this book on your To-Read list.  I highly recommend it.

“So she doesn’t think I’m black enough. What does she want, a black-face comedian? Who is she, anyway, Brother Jack’s wife, his girl friend? Maybe she wants to see me sweat coal tar, ink, shoe polish, graphite. What was I, a man or a natural resource?“

Read Wikipedia on Ralph Ellison and Invisible Man, too.