[CATEGORIES: Literature, Lapham’s Quarterly, Reading, Book Review]
[Click HERE to see my previous posts referencing Lapham’s Quarterly.]
[Some of LQ’s contents are available free.]
[L.Q. cover and images from L.Q. Summer 2018: Water, except where noted otherwise]
[New to Lapham’s Quarterly? See the standard notes at the end of this review. After 40+ LQ reviews I jump right in.]

[I’ve categorized this commentary as ‘literature’, but also, this time, as travel and photography, as I include some of my own picture-taking.]

[Below, my photos of the issue cover.  Banner at the top is my photo of a dirty Alaskan glacier.] 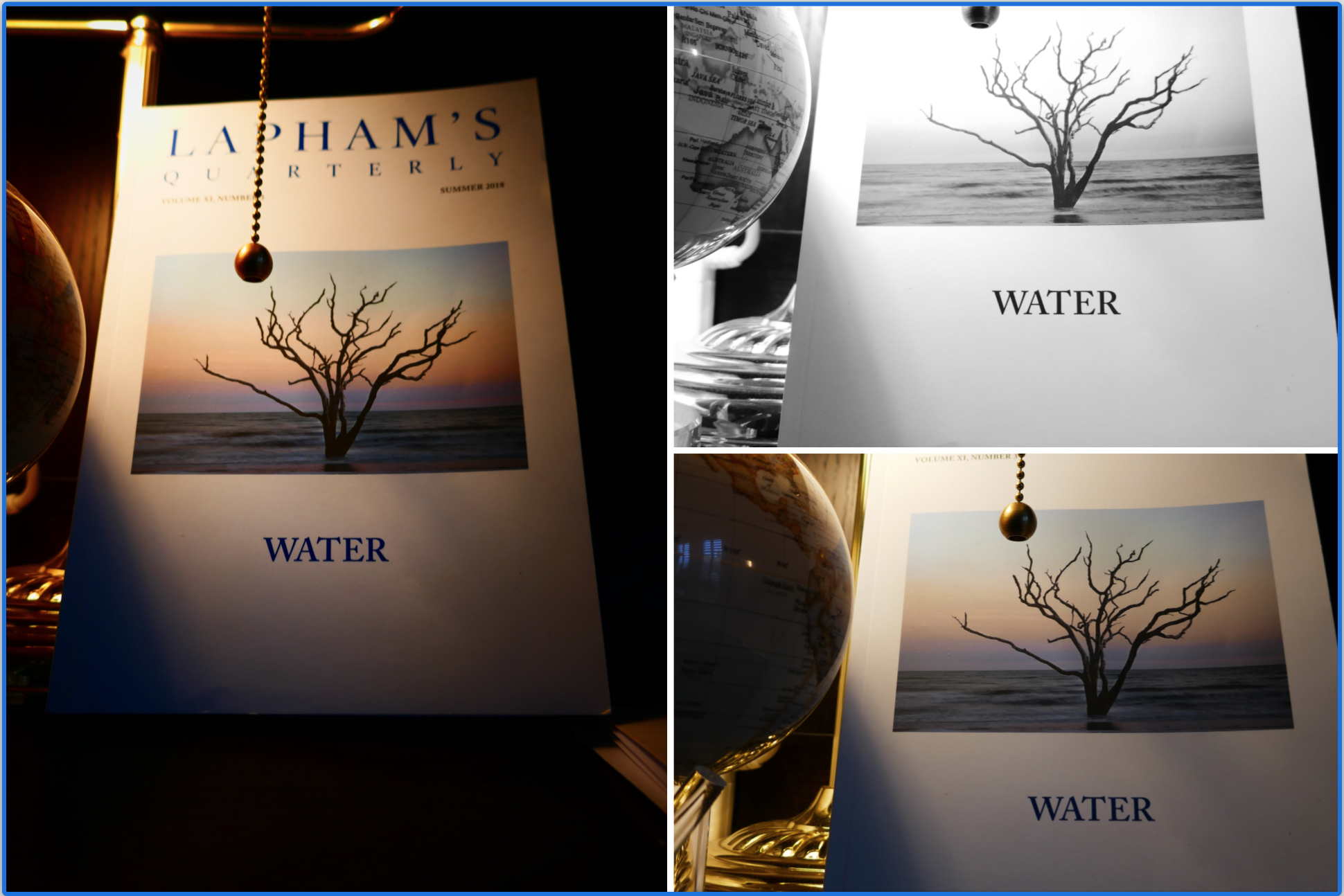 Ploughing through Water.  I’m absorbed with this issue.

You can lead a horse to Water, but you can’t make him read… carefully.  Such is the sum of my pedestrian effort to drink at the fount of knowledge and review/comment on Lapham’s Quarterly.

Origin of You can Lead a Horse to Water

This phrase comes from the 12th century and may be the single oldest distinctly English proverb that is still used today. This phrase originated in English and is one of the language’s earliest proverbs.

Its first recorded English use was in 1175 in Old English Homilies:

[who can give water to the horse that will not drink of its own accord?]

It appeared in John Heywood’s proverb collection of 1546:

It also appeared in literature over the centuries in a variety of forms; for example, in the play Narcissus, which was published in 1602, of unknown authorship, subtitled as A Twelfe Night merriment, played by youths of the parish at the College of Saint John the Baptist in Oxford:

Your parents have done what they coode,
They can but bringe horse to the water brinke,
But horse may choose whether that horse will drinke.

It wasn’t until the 20th century that ‘lead a horse to water…’ got a substantial rewrite, when Dorothy Parker reworked it from its proverbial form into the epigram ‘you can lead a horticulture, but you can’t make her think‘.

[My photo below of Hawaiian waterfalls.] 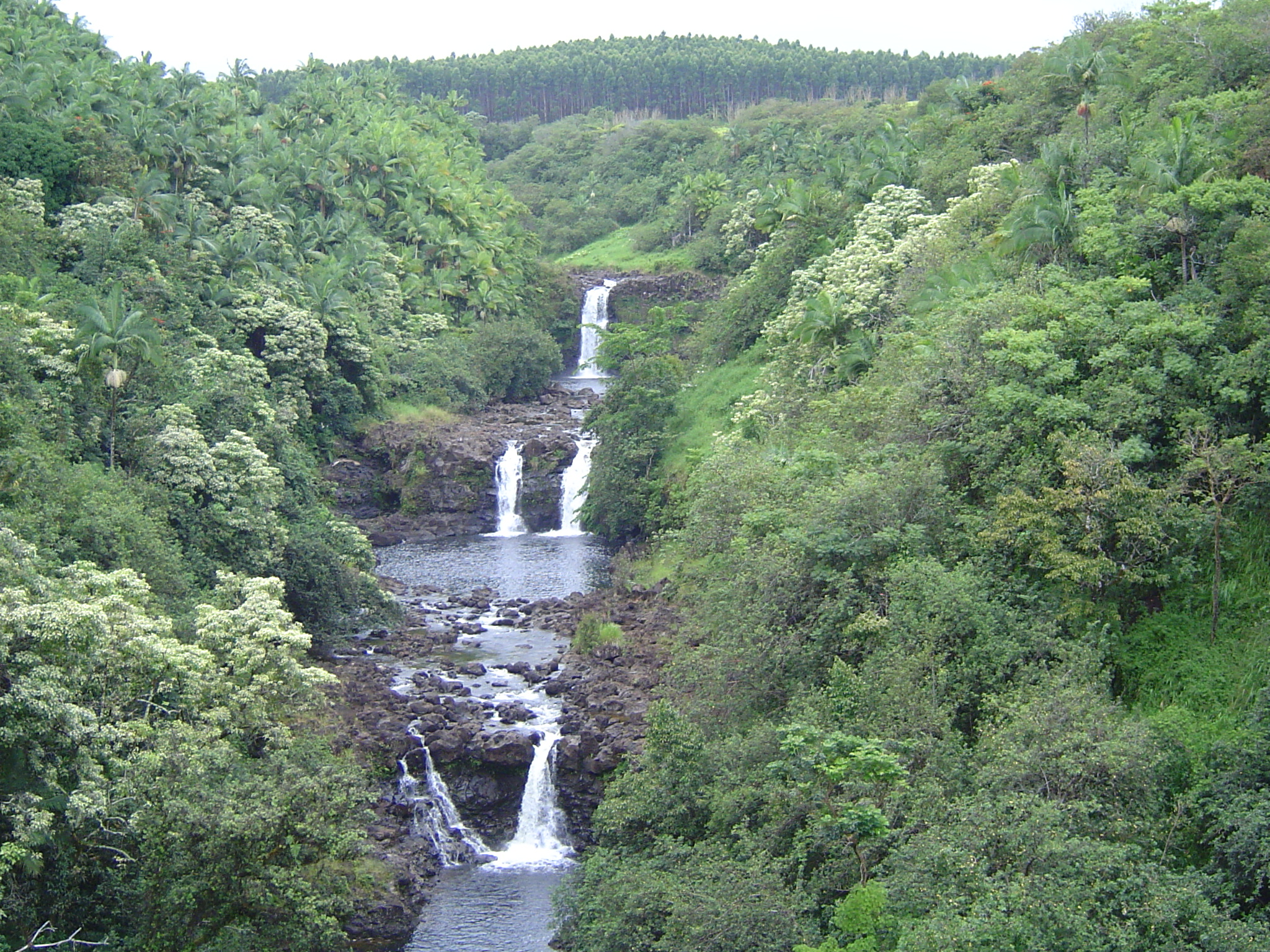 To me it is curious that there is no reference in this issue to Dune, the science fiction classic by Frank Herbert which centers on an arid planet where water is so precious that people wear ‘stillsuits’ to capture and recycle sweat and urine, and cadavers are harvested for water. LQ’s 221 pages cannot be expected to cover everything I suppose, just whet the thought palate.

I found that the average adult male is 60% water. https://www.thoughtco.com/how-much-of-your-body-is-water-609406  “…fat tissue does not have as much water as lean tissue. In adult women, fat makes up more of the body than men, so they have about 55% of their bodies made of water.” https://water.usgs.gov/edu/propertyyou.html  Thus, I’ve read, an obese person could have as little as 45% water by weight. https://en.wikipedia.org/wiki/Body_water

Fortunately, no one is harvesting any of us for water, yet.  That I know of.  Excessive bleeding, virtual and literal, seems to suffice.

I was led to the thought that the vast blocks of Antarctic landscape ice that are calving into the ocean and raising sea levels are fresh water diluting into salt water.  We’re not harvesting that water to drink or irrigate.  WWF informs me:

“Water covers 70% of our planet, and it is easy to think that it will always be plentiful. However, freshwater—the stuff we drink, bathe in, irrigate our farm fields with—is incredibly rare. Only 3% of the world’s water is fresh water, and two-thirds of that is tucked away in frozen glaciers or otherwise unavailable for our use.” https://www.worldwildlife.org/threats/water-scarcity

The hallowed, introductory, Preamble has a guest writer!  This is the first guest author of the Preamble in the 10+ year/43 issue history of the Quarterly.  We are informed:

“Lapham’s Quarterly inaugurates the second decade of its existence by occasionally
recruiting the introductory essay from writers blessed with a broad knowledge of the
topic at band. Donovan Hohn is the author of Moby-Duck: The True Story of
28,800 Bath Toys Lost at Sea. … Lewis H. Lapham will return to this space in the next issue.” (p. 13)

Mr. Lapham, age 83 1/2, is a life-long writer, author, and editor.  He is deserving, and wise I suspect, to prepare to pass the baton.  https://en.wikipedia.org/wiki/Lewis_H._Lapham

[My photo below of the Eiffel Tower on the Seine River.] 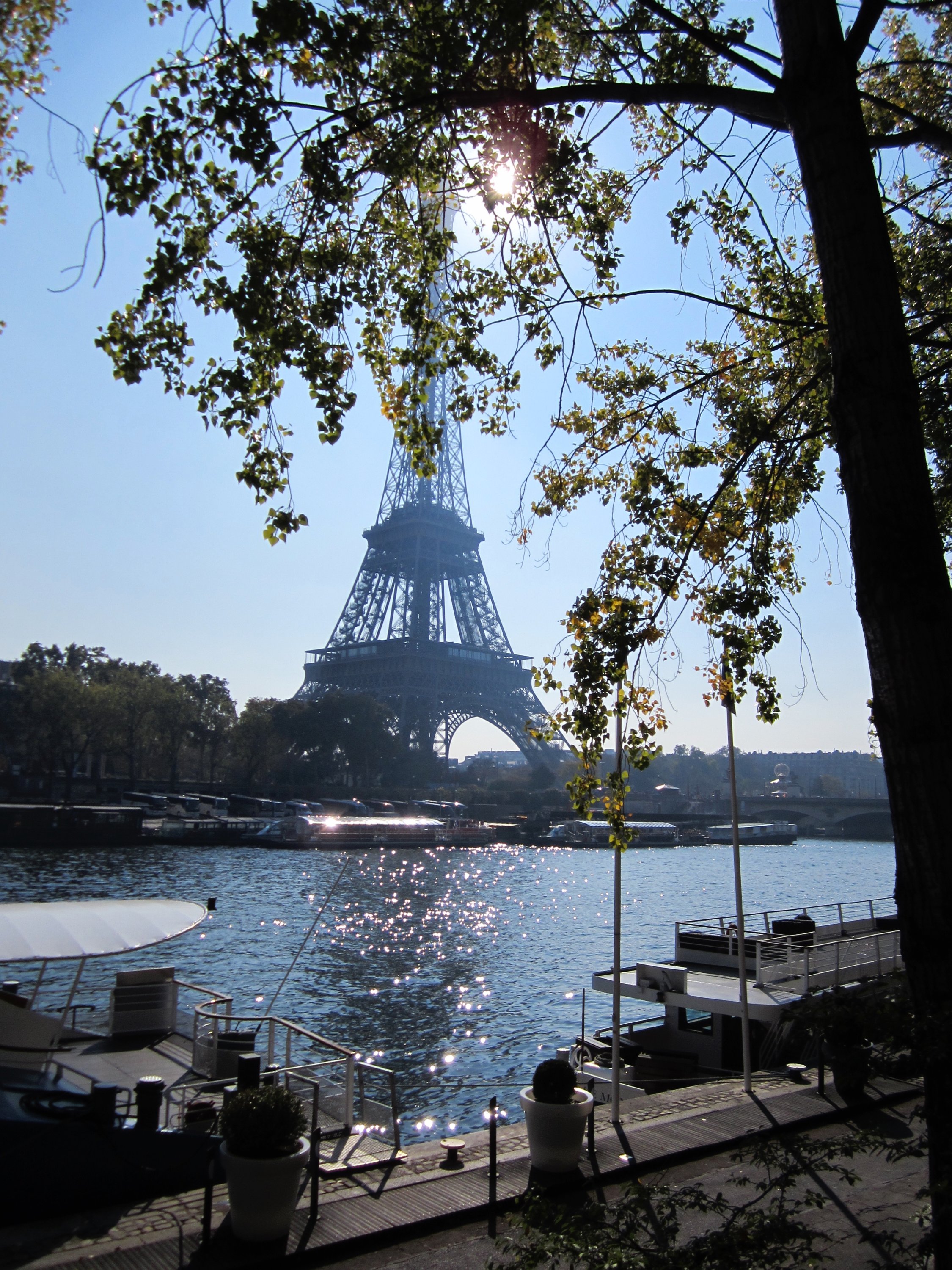 Does Mr. Hohn do justice to his task?  I think so.

“This is a thirsty issue of Lapham’s Quarterly, an exaltation of water and wetness.
The writers gathered in these pages walk the banks of rivers, from the Danube to the
Yangtze to the Nile.  They embark.  They put on waders and conduct sampling expeditions.  They douse. They sound. They visit aqueducts and public baths and bottling
plants. They dive—sometimes without leaving their desks. Like the cub river pilot
Samuel Clemens, they read ripples, fathom depths, chart currents, decipher water’s
secrets (Mississippi River, page 28).”  (p. 15)

By my count, in 11 pages (a substantial number for LQ preambles) Mr. Hohn makes 16 references to the contents.   In the previous issue Rule Of Law, Mr. Lapham, on the other hand, wrote 9 pages of preamble (5 of them 1/2 pages, 4 full pages) with 6 content references.  It seems he usually has more.  By contrast, the Future issue of Fall 2011 has 7 pages, nearly all full, and 12 references.  I suspect a trend or standard is inconsequential.

Mr. Hohn’s preamble is autobiographical, as is Lewis Lapham’s usually.   He entwines references to pieces in the issue with his personal experiences of global travel.

“Several summers ago, I found myself taking a walk under the midnight sun along the shores of the Northwest Passage accompanied by an Inuit kid named Puglik.” …

“The road was muddy. The Arctic in summer’s thaw is a muddy place, muddier and muddier as the planet warms. For underdressed pilgrims on a hike, however, the weather was still plenty cold. A wind refrigerated by sea ice was giving us all the shivers, and Puglik kept wiping his nose with his sleeve, carrying on about his favorite video games and pointing out local landmarks. In a graveyard atop a hill, wooden crosses had begun to topple and tilt. His ancestors were all buried there, at least the ones he knew about, Puglik said, but now the entire hill was thawing, the graveyard slowly sliding toward the sea.”

“To windward flowed a glassy stream in which you could see a weir, a funnel of rocks with which locals corralled fish for easy harvesting, as people had been doing since the ice sheets retreated. The stream was popular with migrating waterfowl as well as fish. Geese that had wintered in Biloxi nested here on the tundra. We know that migrating birds follow spring. They’re chasing sunlight, of course, but they’re also chasing wetlands; they, too, make pilgrimages to water. We came to a bend in the road that conformed to a bend in the stream, and in the stream’s bend was an eddy that conformed to some invisible bend in the cosmos, deep enough for a swimming hole. “We call this part of the river,” Puglik said, “an ‘Inuit Jacuzzi.’ ”” (p. 18)

He writes well, IMO.  “A wind refrigerated by sea ice… ”  “To windward flowed a glassy stream…”

[My photo below of a portion of The Broadmoor Seven Falls at Manitou Springs, Colorado.] 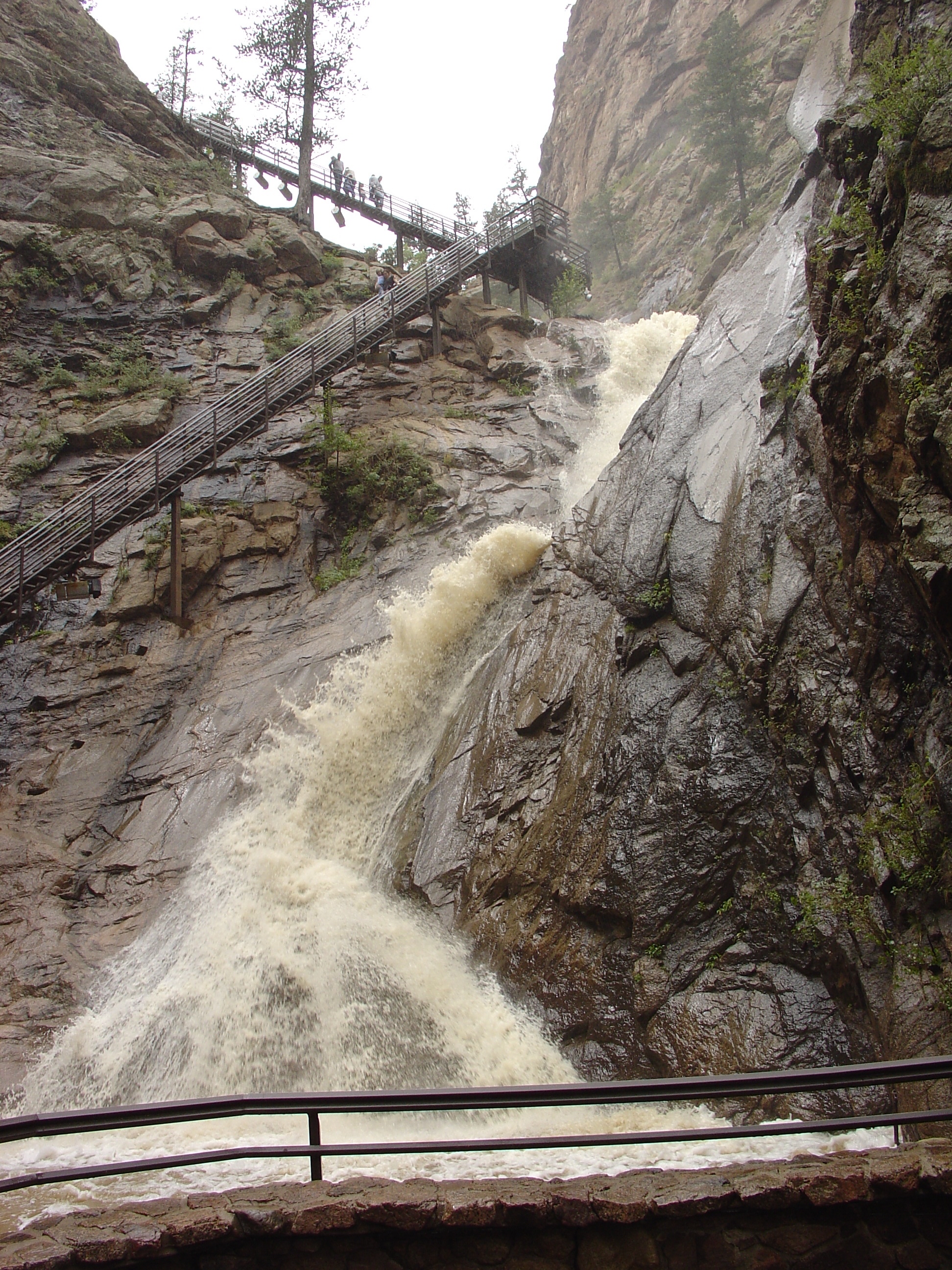 The bits of information woven throughout are tantalizing and thought-provoking:

“I’d joined a cryologist with the Canadian Ice Service on a survey conducted by helicopter. The cryologist—or “ice pick,” as people in her line of work are colloquially known—had to chart and classify the puzzling ice pack visible below. Although it had thawed and thinned earlier than it had in any previous year on record, there remained a multitude of ice to see and classify. The names for its varieties, I learned, are as numerous and lovely as those for clouds: frazil, pancake, nilas, grease, agglomerated brash. The language of ice describes more than dimensions and shapes. It names subtle gradations in the phase changes water undergoes as it solidifies and expands or liquefies and condenses.” (p. 18)

“These days I live in southeast Michigan, which is to say I dwell in a water­shed of paradox. Here we are, at the edge of the Great Lakes, which together contain 84 percent of North America’s and 20 percent of the world’s accessible freshwater. The Great Lakes are puddles of glacial melt. Rainfall and tributaries contribute only 1 percent of their total volume. Much of the rest is “fossil water,” sequestered from the water cycle since the last ice age. Under a recently issued state permit, the Nestlé corporation, a major purveyor of bottled water, can now draw up to four hundred gallons of Michigan groundwater per minute for just two hundred dollars a year. And yet in Flint, people now regard their faucets with warranted suspicion, and in Detroit, whose water treatment plant would have spared the people of Flint from mass poisoning, the water company has been turning the spigots off, letting their delinquent customers go thirsty or purchase bottled water from Nestlé.” (p. 19)

“We forget the value and scarcity of potable water. Most of the planet’s 332 million cubic miles of water is salty. “Only 2 percent is fresh,” Rose George reports in her 2008 study of human-waste management, The Big Necessity, “and two-thirds of that is unavailable for human use, locked in snow, ice, and permafrost.” We forget how much of it we waste—we Americans especially. While about a billion people get by on five liters of water a day, Americans use more than twice that in a single toilet flush. We forget the people—some 30 percent of the global population—who do not have easy access to safe drinking water. We forget what life was like prior to the advent of chlorination.” (p. 19)

As always, LQ presents new vocabulary for me to experience, if not remember.  Within a few paragraphs, Mr. Hohn has me searching for:
. caesura – an interruption or break
. batture – an elevated river bed; the alluvial land between a river at low-water stage and a levee —used especially of such land along the lower Mississippi river
. roseate – rose-colored; cheerful or bright; optimistic; promising good fortune
. startlement – the state of being startled; to disturb or agitate suddenly as by surprise or alarm

It’s a good preamble, available in it’s entirety at https://www.laphamsquarterly.org/water/watermarks

“If you can’t go through an obstacle, go around it. Water does.” —Margaret Atwood, 2005

In discussions with a good friend I often used water as an analogy for economics.  In my opinion they are both forces of nature.  Man’s efforts to control them are limited and the consequences unnatural. 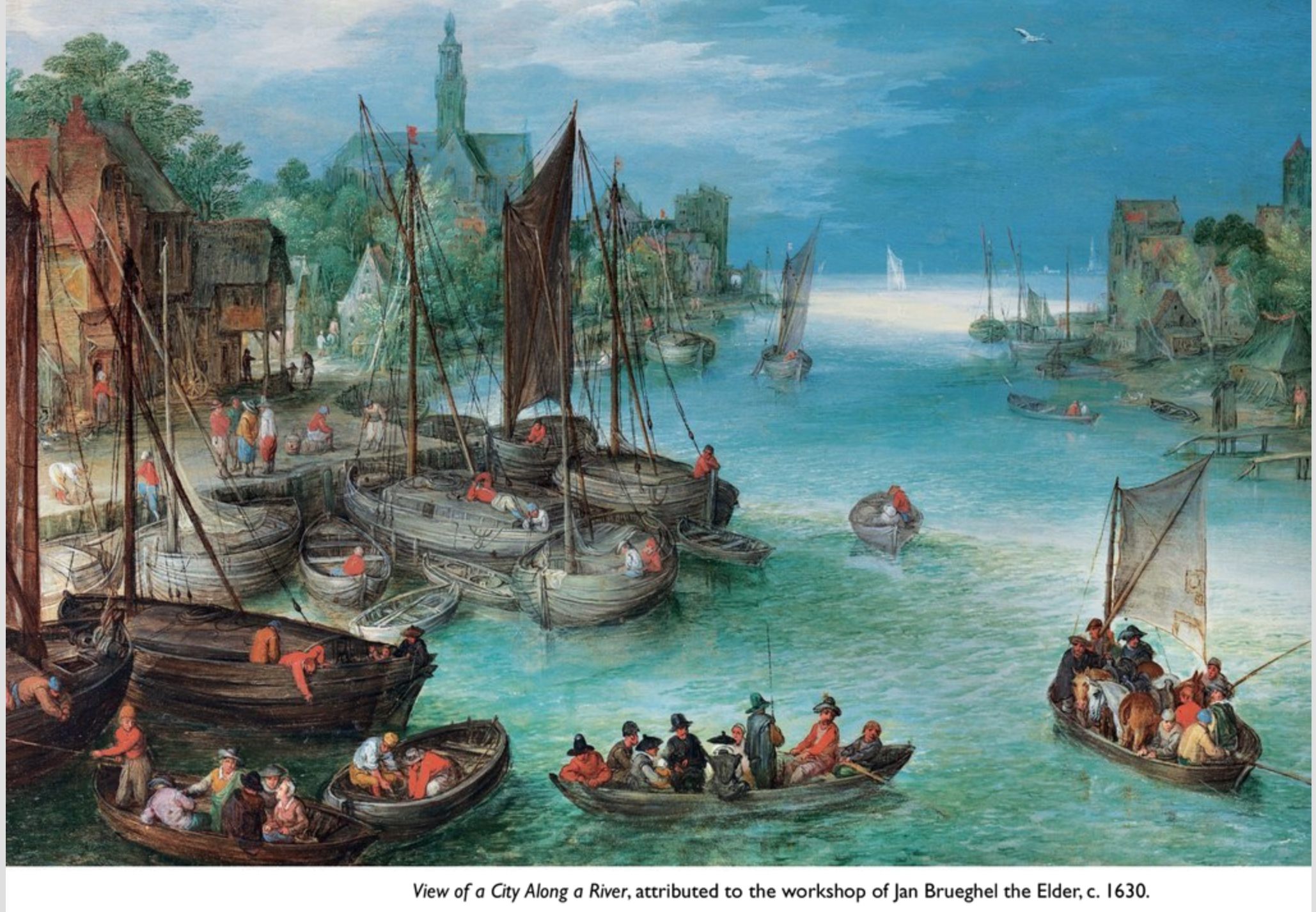