[CATEGORIES: Literature, Lapham’s Quarterly, Reading, Book Review]
[Click HERE to see my previous posts referencing Lapham’s Quarterly.]
[Some of LQ’s contents are available free.]
[L.Q. cover, quotes, and images from L.Q. Fall 2018: Rivalry & Feud, except where noted otherwise.]
[New to Lapham’s Quarterly? See the standard notes at the end of this review. After 40+ LQ reviews I jump right in.] 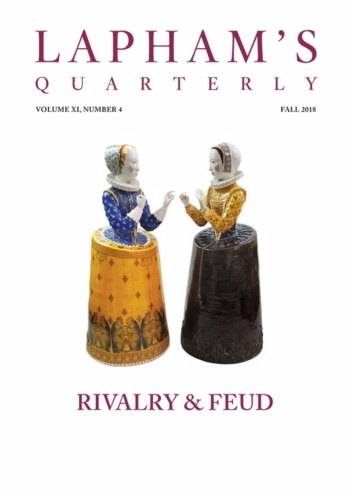 Rivalry & Feud.  Murder most foul perhaps.  A friend’s best friend, about my age, 70+, was murdered a year and a half ago.  Brutally beaten and strangled to death by hand.  Teeth knocked out, ribs broken, vertebrae cracked.  Patricide.  The perpetrator was the murdered man’s 39 yr-old son.  Beyond tragic.

Now that I have your attention, this issue of Lapham’s Quarterly is not nearly so ghastly. Of the 44+ issues over the last 11 years, I think L.Q. Spring 2009: Crime & Punishment, still garners that prize, even more than L.Q. Fall 2013: Death. Crime and punishment are equally cruel, if not unusual, perhaps one more deservedly than the other.  Who am I to judge.

Rivalry and feud, however, can lead to crime and punishment, eventually death.

The Hatfields and McCoys.  Many of us moderately well-read U.S. Americans have heard of these famous feuding clans, located along the Kentucky/West Virginia border in the mid-late 19th century.  Wikipedia calls them a “metonym for bitterly feuding rival parties”.  This issue contains a complete essay and excellent overview on the subject.  Wikipedia enlightens also.

“Like the Hasidim of today—among whom families of a dozen or more children are highly respected—Appalachian families in the mid-nineteenth century honored and needed large families. Hatfields, McCoys, and McCoy cousins the Clines were among the clans struggling to farm the rugged land. Devil Anse and Levisa Chafin “Vicey” Hatfield had thirteen children; Randall and first cousin Sally McCoy had sixteen or seventeen.” (p. 191)

Full essays are available online for those of you internet-connected worldwide, ergo this titillating, voyeuristic, informative piece, Love’s Labors Lost by Jayne Anne Phillips can be viewed even by the non-subscriber at https://www.laphamsquarterly.org/rivalry-feud/loves-labors-lost .   (Shakespearian, forsooth, it is not.)  I enjoyed it.

Another noteworthy, full-length essay was Parry And Thrust by Jim Holt.

“In 1968 there existed in the U.S. two especially splendid exemplars of a now-extinct species: the celebrity intellectual. They were Gore Vidal and William F. Buckley Jr. Then in their early forties (they were both born in 1925), Vidal and Buckley became famous in a way that no intellectual is today.  …Each spoke in a theatrical accent of his own invention: they did not merely have opinions, they pronounced them.

The title may be an innuendo-loaded double entendre, as Gore Vidal was a homosexual.  The essay makes a few ‘pointed’ references, not for you who might be blushingly delicate and lately from a monastery or nunnery, but it’s not that bad, REALLY.

This is a consummate read.  I recommend it along with Loves Labors Lost.

”One of the greatest pieces of wisdom in the art of war is not to drive one’s enemy to despair.  It is dangerous to attack a man whom you have deprived of every other means of escape but that of weapons; for necessity is a violent schoolmistress” (p. 28)

”Let us consider the relation of children to their brothers and sisters.

I do not know why we presuppose that it must be a loving one, since examples of brotherly and sisterly enmity [and fatherly? —JH] among adults force themselves upon everyone’s experience, and since we so often know that this estrangement originated even during childhood or has always existed.”

“The younger has been consumed by helpless fury against the elder, has envied it and feared it, or its first impulse toward liberty and first feelings of injustice have been directed against the oppressor…   …It is not difficult to see that the character even of a well-behaved child is not what we wish to find in a grown-up person. The child is absolutely egotistical; it feels its wants acutely and strives remorselessly to satisfy them…” (p. 43)

Does the child feel it has a right to be showered with seemingly infinite wealth, unearned, undeserved?  Is it angry and tantrum-prone when deprived?  Sad.  Tragically sad.

Mark Twain doesn’t like The Deerslayer, or James Fenimore Cooper, I suspect:

”James Fenimore Cooper’s art has some defects. In one place in Deerslayer, and in the restricted space of two-thirds of a page, Cooper has scored 114 offenses against literary art out of a possible 115. It breaks the record.

There are nineteen rules governing literary art in the domain of romantic fiction. In Deerslayer Cooper violated eighteen of them. These eighteen require:

(2) They require that the episodes in a tale shall be necessary parts of the tale, and shall help to develop it. But as The Deerslayer tale is not a tale and accomplishes nothing and arrives nowhere, the episodes have no rightful place in the work, since there was nothing for them to develop.” (p. 61)

“He [Twain] liked, beyond all things, to push an affair to the bitter end,” William Dean Howells wrote of his contemporary, “and the end was never too bitter unless it brought grief or harm to another.” (p. 62)

Twain and Freud both are available free online to pique the curiosity of the future subscriber or random short-read enthusiast.  (I’m determined to get that free toaster for salesmanship.) Look for Burn Notice and Sibling Rivalry.

Speaking of acrimony and the cacophony of our current American political climate, Simone Weil is prescient (or is it always like this?):

“One recognizes that the partisan spirit makes people blind, makes them deaf to justice, pushes even decent men cruelly to persecute innocent targets.  One recognizes it, and yet nobody suggests getting rid of the organizations that generate such evils.”

”Nearly everywhere—often even when dealing with purely technical problems—instead of thinking, one merely takes sides: for or against.  Such a choice replaces the activity of the mind.  This is an intellectual leprosy; it originated in the political world and then spread through the land, contaminating all forms of thinking.

This leprosy is killing us; it is doubtful whether it can be cured without first starting with the abolition of all political parties.” (p. 75)

From, apropos, On the Abolition of All Political Parties, written prior to her death in 1943, only fairly recently translated to English.  No political parties?  What would we do, elect a king?  Oh. Never mind.

Still, many candidates are running as Independent, Libertarian, or Unaffiliated.  One well spoken young man running for State Senate in my local district was pounding the pavement every Sunday last summer at the local market.  What a monumental effort.  In the recent midterms he garnered 5.66% of the vote vs. Republican (52.78%) and Democrate (41.56%).  I voted for him.  I hope he kept his day job.

As usual, so many fine extracts and essays.  I could write a quarterly about a quarterly.

Back to the future, or at least the beginning.  I mustn’t forget the return of Lewis Lapham to writing the Preamble after a brief 1-issue sabbatical.  My notes:

The title is Sticks and Stones.

“…will break my bones,
But names will never hurt me.”  (We know that childhood chant.)

“One brings forth discord, nurtures evil war:
Wicked, there’s nothing mortals love her for,”

“…the other… …high-seated Zeus
Set in earth’s roots—for this one has a use:
She spurs a man who otherwise would shirk,
Shiftless and lazy, to put his hands to work,
Seeing a rich man plow and plant and labor
To set up house—then neighbor envies neighbor
Racing to reach prosperity.  This strife
is boon to man.” (p. 32)

“…he [Machiavelli] drew the inference that violence and civil disorder are the vitality of a republic giving birth to itself.

The American Declaration of Independence holds to the same view” (p. 16-17)

A VERY lengthy and noteworthy account, of which the first parts I read are enlightening of the artists’ rivalry, is here:

(For easier reading of this piece, in Apple Safari you can click Reader Mode, the left end of the url address box, and single-stream the multiple pages.
In Microsoft Explorer you are supposed to click the open book icon at the far right of the url address box which is located at the bottom of the web page.) 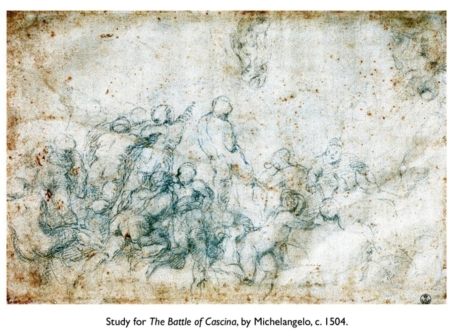 Mr. Lapham summarizes how violent was our ‘birth of a nation’.

“The revolution was both civil and foreign war. More than ten times as many Americans died, per capita, in the Revolutionary War than in World War I, almost five times as many as in World War II. Patriots tortured and imprisoned their Loyalist neighbors, seized and burned their property, raped their wives, orphaned their children. British troops summarily executed American rebels perceived to be savages; American rebels summarily massacred British gentlemen deemed to be monsters. Washington’s army pursued the Iroquois with the policy and practice of genocide. (p. 17)

He comments on the rivalry between Thomas Jefferson and John Adams:

“The old friends refused to speak ill of each other and declined to make personal campaign appearances (pushing oneself forward for public office was looked upon in 1800 as deplorable vulgarity); the telling of vengeful and vote-getting lies fell to the lot of the rumormongering press.” (p. 18)

He notes a portion of President Trump’s speech in May 2018 to graduating midshipmen at the USNA:

“In the world according to Trump, money is the true, the good, and the beautiful, the hero with a thousand faces, all of them the face of Trump—gloating or seething, saying and doing whatever it takes to make the American democracy smaller than himself, to nullify it in theory, dispose of it in practice. (p. 20)

He concludes with comments on democracy and capitalism:

“The Strife’s a twin, capitalism and democracy both agents of change but opposed to each other in the nature and direction of their movement. A democratic society places a premium on equality; a capitalist economy does not. Money is property, its movement the competitive pricing of things as they are; democracy is the motion of mind reaching for a change of heart.” (p. 21)

Mr. Lapham’s preamble is worthy of scrutiny.  It’s available free, online at LaphamsQuarterly.org .  Browse here for other gems in Voices In Time.  The ‘list view’ is best.