What to my wondering eyes should appear, in my mailbox this 4th of December, but next quarter’s print edition of L.Q.  It is one of the earliest arrivals ever.

Fresh food, at last.  For thought.  In the interim since L.Q. Fall, Rivalry & Feud, I did re-inhale Shibumi by Trevanian (author of The Eiger Sanction), with its philosophical insights and escapist adventure, but I feel ready to embark again.

NIGHT?  Hmm.  This is perhaps the most vague and general topic in the Quarterly’s 11 year history.  Yes, L.Q. addressed Water in Summer 2018, and has addressed broad topics such as Fear, Time, Youth, Luck, Death, The Future, and Flesh, as well as more substantial ones such as Crime and Punishment, States of War, and Ways of Learning.  Aren’t there more burning issues and inquiries than Night?  What about Morality, or Principles?  Guns and/or Armament, from clubs to A-bombs in 221 pages or less.  ‘Civilization?’  (I choke on the word.  A perpetrated fiction I think.)

Who is in it?  The back cover says:

Some I have heard of.  Edvard Munch did The Scream painting didn’t he?  (Skrik for you Norwegians.)  Yes, Wikipedia confirms.  And Carl Sagan.  ‘Billions and billions of stars.’

Who else in the ‘contenuto’ might pique our curiousity? Roger Ebert, the movie critic, of course.  Charles Dickens, F. Scott Fitzgerald, Robert Louis Stevenson.  (RSL a favorite in my youth, though it is far back in the previous century that I read him.  I should do so again. Waiter! I’d like another lifetime please.  Unlike Tithonus though, I’d like eternal youth with that.  I have so much reading to do!’)  Virginia Woolf (who’s afraid of?), Walt Whitman, many many others.

I do lean to Western authors, but Asians and Arabs are represented also.  Li Yu, Shihab Al-Din Al-Nuwari, Sukhdev Sandhu, Yoshida Kenko, to name a few.  Alas, no Ibn Battuta, my favorite Middle Eastern (Moroccan, actually) wanderer.  How did he finance all that travel?  How do so many people today flood, swamp, and inundate tourist sites?  We are ants smothering the globe.

In my comments on Rivalry & Feud last quarter I did not mention that the 3 sections of Voices In Time were Offense, Escalation, and Reconciliation.  Karmic retribution is now avoided I trust.  This month the three are Twilight, Midnight, and Dawn.  Will a future issue titled Day have Daybreak, High Noon, and Dusk?  I hope we are not witnessing the decline and fall.  L.Q. has never let me down.

The Preamble is absent Lewis Lapham again.  Transitioning I presume, though it is promised he will return next issue.  The author this issue is a writer, Francine Prose. What’s in a name?  Google and Wikipedia reveal noteworthy insights.  She has written 19 novels, 8 works of non-fiction including a book about Anne Frank, and is a past president of PEN American Center.

Not one to avoid controversy, “During the 2015 controversy regarding American PEN’s decision to honor Charlie Hebdo with its annual Freedom of Expression Courage Award, she, alongside Michael Ondaatje, Teju Cole, Peter Carey, Rachel Kushner and Taiye Selasi, withdrew from the group’s annual awards gala and signed a letter dissociating themselves from the award, stating that although the murders were “sickening and tragic,” they did not believe that Charlie Hebdo‘s work deserved an award.[10][11]”  (Wikipedia)

The Preamble is titled After Dark.  Ms. Prose appears to have adequately perused the current issue as she cites 22 references to content.  She expresses an interest in the early 20th century black-and-white Parisian photography of Brassaï (sample below). 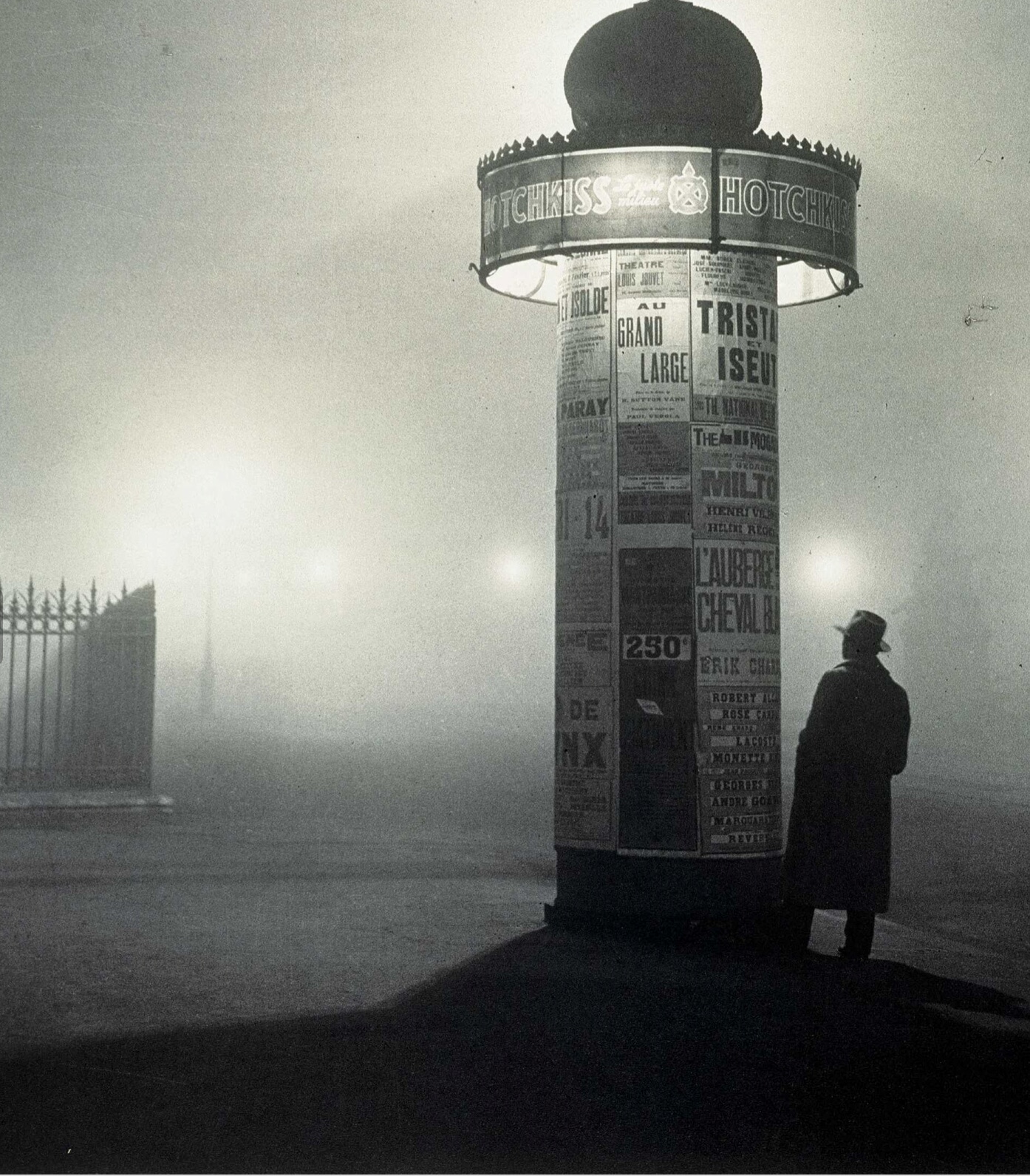 “In his introduction to his photography collection The Secret Paris of the ’30s, Brassaï wrote,

Just as night birds and nocturnal animals bring a forest to life when its daytime fauna fall silent and go to ground, so night in a large city brings out of its den an entire population that lives its life completely under cover of darkness…I wanted to know what went on inside, behind the walls, behind the facades, in the wings: bars, dives, nightclubs, one-night hotels, bordellos, opium dens. I was eager to penetrate this other world, this fringe world, the secret, sinister world of mobsters, outcasts, toughs, pimps, whores, addicts, inverts.” (p. 14)

I think she encapsulates this issue with the following:

“In the hours between midnight and dawn, Paris seemed to Brassaï not only another city but a different world—a “fringe world” with its own climate, its own natural laws, its own geography, denizens, and species. This issue of Lapham’s Quarterly supports the idea: for many of the writers included in these pages, night and day are distinct and disparate worlds. The mystery and excitement that some seek in the darkness is precisely what alarms and repels those who dread it. What’s striking is the intensity and persuasive logic with which these contributors explain (and argue for) which world, night or day, they would choose, if they could, to inhabit for good.” (p. 15)

We can probably guess where Night will take us.  Human fear and survival for starters. We are not nocturnal by origin.  We have now lighted the night.  Will we dispense with night for sleep and day for awake?  Possibly.

Ms. Prose notes: “Karl Marx warns his readers that capitalism would increasingly come to view leisure—and sleep—as luxuries that must be dispensed with if workers are to be exploited to the fullest: “In its blind, unrestrainable passion, its werewolf hunger for surplus labor, capital oversteps not only the moral but even the merely physical maximum bounds of the working day. It usurps the time for growth, development, and healthy maintenance of the body.”“ (p. 18) 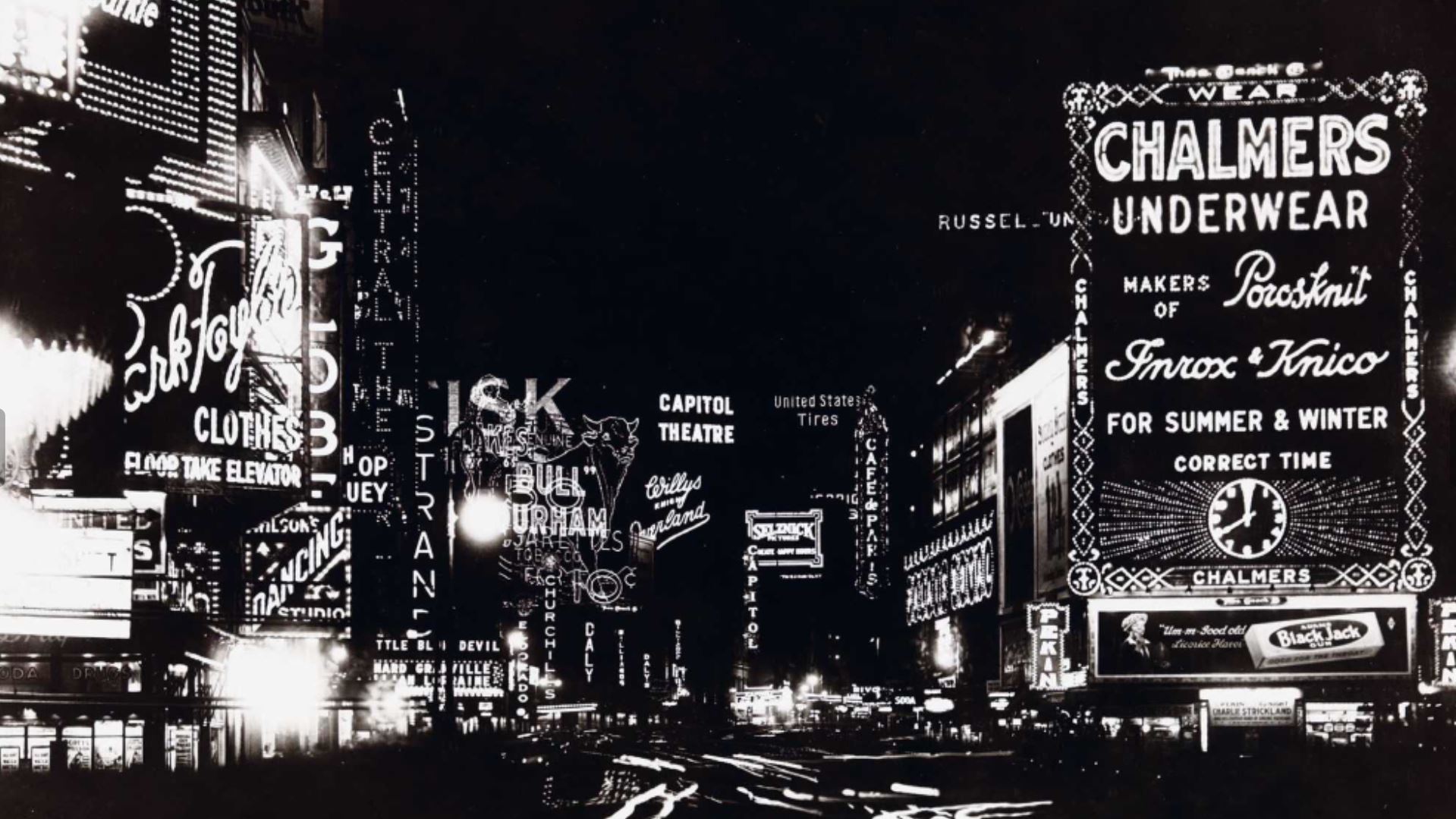 Only 1919 and already well bathed in light.  Explore Chalmers if you like: http://www.lostlandmarks.org/chalmers2.htm

You can get ahead of my reading via LaphamsQuarterly.Org.