[CATEGORIES: Literature, Lapham’s Quarterly, Reading, Book Review]
[Click HERE to see my previous posts referencing Lapham’s Quarterly.]
[Some of LQ’s contents are available free.]
[L.Q. cover, quotes, and images from Lapham’s Quarterly Winter 2020: MEMORY, except where noted.]
[Right-click on a photo may give the option to open it separately.]
[NEW to Lapham’s Quarterly? See the standard notes at the end of this review. After 45+ LQ summaries I jump right in.]

[This is a READING section, for those who may stumble in looking for photography.]

The Voices In Time this issue are Save, Edit, and Delete. (!)

Before I read the Preamble, I like to leaf through the journal and scan the art, side-quotes, and info-graphics.

“I think heaven will not be as good as earth, unless it bring with it that sweet power to remember, which is the staple of heaven here.”
—Emily Dickinson, 1879 (p. 54)

Virginia Woolf  (1882–1941)
“It is of lying half-asleep, half- awake, in bed in the nursery at St. Ives. It is of hearing the waves breaking, one, two, one, two, and then sending a splash of water over the beach…It is of lying and hearing this splash and seeing this light and feeling it is almost impossible that I should be here; of feeling the purest ecstasy I can conceive.”

Agatha Christie (1890–1976)
“I remember distinctly my third birthday. The sense of my own importance surges up in me. We are having tea in the garden…And then the exciting occurrence—a tiny red spider, so small that I can hardly see it, runs across the white cloth. And my mother says, ‘It’s a lucky spider, Agatha, a lucky spider for your birthday.’ ”
(p. 60 all)
___________ 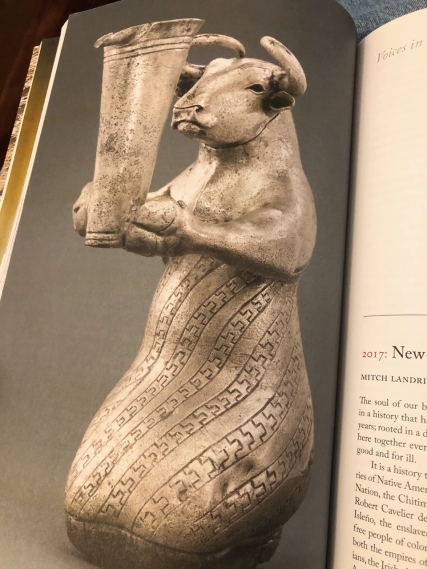 Per L.Q.’s email:
“The introductory essay to the Quarterly’s Winter issue, Memory, speaks to the value of historical consciousness in a democratic society. It can be read as an expression of the publication’s ongoing purpose.”

Lewis Lapham’s introduction is titled The Remembered Past. It starts with these quotes, worthy of contemplation:

“What, generally speaking, is history? A fable agreed upon.”
—Napoleon Bonaparte

In addition to the opening quotes I like the Cicero quote within, on p. 21: “Not to know what happened before one was born is always to be a child.” Not an innocent child, I say, but an uninformed one.

The Preamble begins: “Donald J. Trump was elected president…”.  Should I stop here? Should politics be off limits? Is not politics and governance of humans one of the fundamental aspects of humans and their history? I think yes. Sadly, but timely, we must dredge recent and distant memory to alleviate the apparent chaos of our current governance. We must look at our past and choose our future.

Of course the past is remembered, but is it a fable agreed upon, or a fable on which only the winners must agree? I posit that memories disagree, in staggering numbers.

What does Mr. Lapham have to say?

“What is memory and where is history? The questions have been shaping the hyperpolarized forms of American identity politics for the past thirty years, demanding removal of statues from public parks, freedom of speech from private schools, drumming up the sound and fury of the country’s culture wars, dividing we the people into militant factions of us and them.” (P. 14)

I have a problem destroying evidence of history, such as the destruction of the Bamiyan statues by the Taliban or the Palmyra antiquities (and beheading the curator) by Isis in Syria. Are we far from that when Civil War statues are removed? Reminders of bad history can be as worthwhile a lesson as reminders of good. What about rude or licentious speech now outright illegal on some college campuses? 1984/Orwellian to be sure. What happened to simple peer pressure? Be careful what you wish for when erasing thought and memory.

I think he makes very pertinent points about our American Constitution:

“The Constitution makes no claim to the possession of a storied past. The institutions of American government were meant to support the liberties of the people, not the ambitions of the state. Given any ambiguity on the point, it is the law that gives way to the citizen’s freedom of thought and action, not the citizen’s freedom of thought and action that gives way to the law. The Bill of Rights establishes the order of priority in the two final amendments, the Ninth (“The enumeration in the Constitution, of certain rights, shall not be construed to deny or disparage others retained by the people”) and the Tenth (“The powers not delegated to the United States by the Constitution, nor prohibited by it to the states, are reserved to the states, respectively, or to the people”).” (p. 17)

‘These days’ I often wonder what happened to our three branches of government with checks and balances on each other. We may be as close to having a dictatorship as was ever imaginable. Some want to interpret the Constitution loosely and liberally, others want to be rigid and strict. I trust the Supreme Court will remain supreme, above it all. It is to be determined.

…on January 10, 1776, Paine published Common Sense.
The pamphlet is the founding document of the American Revolution. Paine levels a fierce polemic against “the disease of monarchy,” asks why should someone rule over us simply because he is someone else’s child. Common Sense forces the point that all men deserve free and equal ownership of their own minds.” (p. 18)

The Trump government currently occupying Washington Paine would have recognized as “royalist” in sentiment, “monarchical” in its mistrust of freedom, “evangelical” in its worship of property. The voice of Thomas Paine speaking to his hope for the rescue of mankind is, by comparison with the sound bites now littering the floors of Congress and the White House, the sound of water in a desert.” (p. 21)

As an aside, a quick search of this issue via my digital access subscription tells me it does not mention hyperthymesia, a.k.a. highly superior autobiographical memory. I remembered this phenomena (a feat in itself!) having seen it discussed on the CBS 60 Minutes tv show about 10 years ago. Individuals with this condition have ‘almost’ total recall of events in their life, though some studies show it does not necessarily help with memorizing volumes of other facts. Some have found it to be a burden, others, like a woman on the show, say ‘it’s your life, why wouldn’t you want to remember it?’ HERE is a link to a multi-page article on the TV show.