[CATEGORIES: Literature, Lapham’s Quarterly, Reading, Book Review]
[Click HERE to see my previous posts referencing Lapham’s Quarterly.]
[Some of LQ’s contents are available free.]
[L.Q. cover, quotes, and images from Lapham’s Quarterly Spring 2020: SCANDAL, except where noted.]
[Right-click on a photo may give the option to open it separately.]
[NEW to Lapham’s Quarterly? See the standard notes at the end of this review. After 45+ LQ summaries I jump right in.]

[This is a READING section, for those who may stumble in looking for photography. My summaries of Lapham’s Quarterly historical journal continue.] 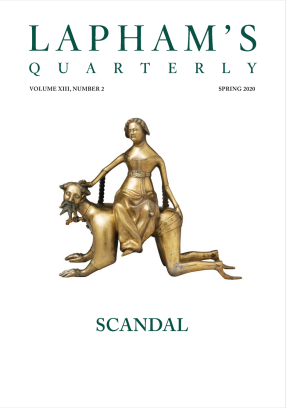 There is an online Table Of Contents. Underlined items are a link. The left side links to the extract or essay, right side to author info. Inquiring minds may explore.

The Voices In Time sections this issue are Smoke, Fire, and Ash.

I’ve barely begun to talk about Smoke, while my reading is well into Fire right now. I’m indoors a lot these days (April 2020). An introvert’s dream, as someone reminded me. Onward.

“One of our correspondents very justly observes that “there is nobody of whom something disagreeable may not be said.”

By this wench Sally, our president has had several children. There is not an individual in the neighborhood of Charlottesville who does not believe the story, and not a few who know it.” (p. 36) Free online.

Marghanita Laski is quite amusing with her wildfire-spread of gossip about relationship across class lines, fictionally 1950-ish, of course:

“It was always upsetting and disgusting to see people embracing in public, but when such people turned out to be a lady and a working-class man, the whole thing was too entirely repellent just to pass on and go out to tea with somebody who didn’t know either of the parties concerned.” (p. 37)

“For herself, she could hardly wait to get along to Edna Pickering and drop in her ear the dreadful delicious news.
But Trixie was feeling strengthened by the meeting, and avid for more and still more. “I was just on my way to have tea with Mrs. Paynter-Smith,” she said, and they parted, one up the hill and one down, each pregnant with calamity.” (p. 38) ‘…pregnant with calamity.’ Chuckle.

Boccaccio is also amusing with an extract from his 14th-century Decameron (nickname The Human Comedy) about hetero love affairs in a nunnery. I find it noteworthy how humor is one titillation we get from scandal.

As an aside, the premise to this collection of 100 tales (an influence on the future Canterbury Tales) is that it’s told by a group of seven young women and three young men sheltering in a secluded villa just outside Florence to escape the Black Death. Deja vu’ all over again in our own ‘plague’ times of COVID-19. I hope the group is social-distancing.

I’m very remiss in reading 19th century classic novels (Dickens, Austen, Brontes, you-name-it) so I’m in unfamiliar territory criticizing them. Perhaps there is something to be gained by naive insight. There is a short extract from the novel Pride and Prejudice by Jane Austen, written in 1813, what would be just a few years before her death at age 41. Talk about social class structure. It is loaded.

“…the door… opened by a servant…” “…let the servant go after…” “Calling back the servant, she commissioned him…” “Let me call your maid.” Well, if it’s about rich people, and there is nothing wrong with that, I get the picture. It just seems pretentious to me.

Scandal? The passage is about the overwhelming shame, again, of a sister eloping with a ‘layabout’, ‘wastrel’, and ‘compulsive liar’ (Wiki). The horrors… It’s a brief read, free from the Table of Contents mentioned, for the curious. 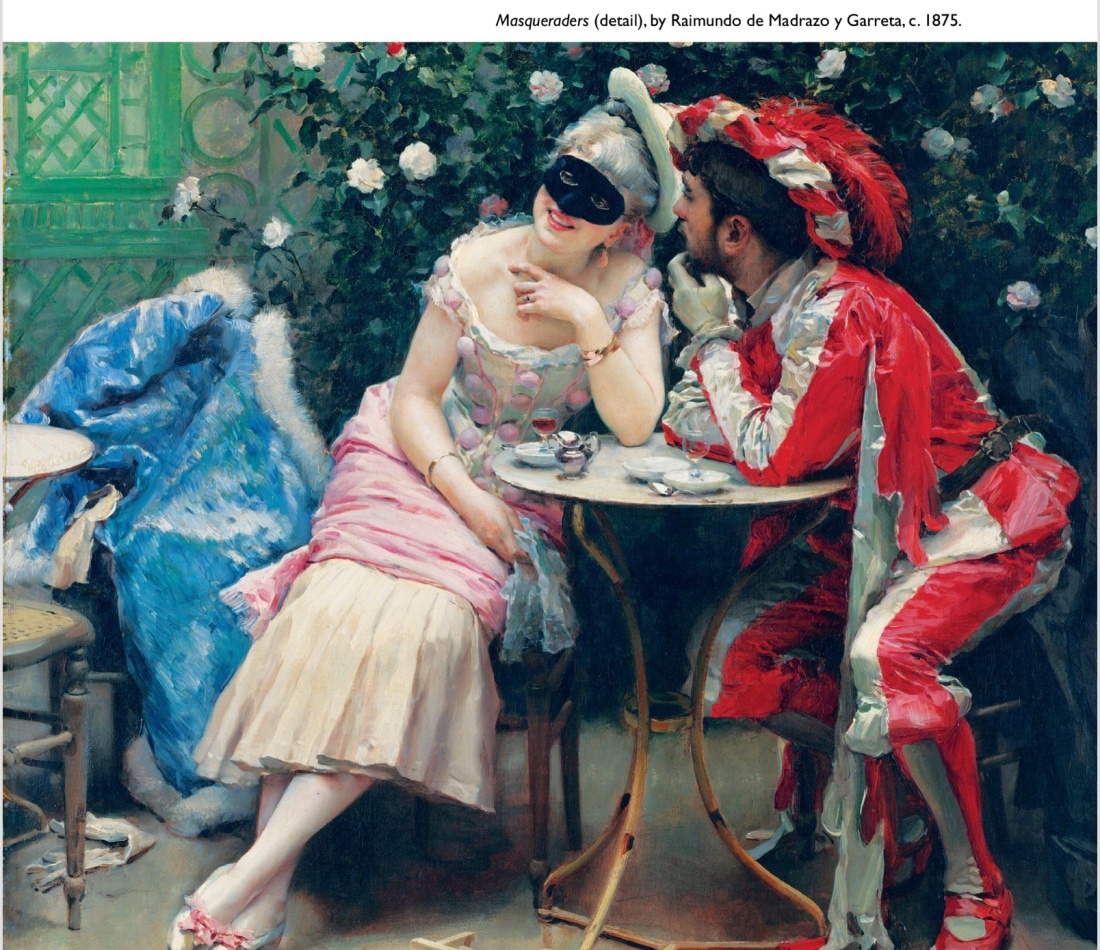 Richard Brinsley Sheridan (Who? It’s why I spend half my time reading L.Q., the other half searching Wikipedia for author info.) is an 18th century playwright with some great digs from The School for Scandal:

Mrs. Candour: Now, I’ll die, but you are so scandalous, I’ll forswear your society.

Miss Vermilion, to be handsome.

Crabtree: I am very glad you think so, madam.

Mrs. Candour: She has a charming fresh color.

Lady Teazle: Yes, when it is fresh put on.

Mrs. Candour: Oh, fie! I’ll swear her color is natural, I have seen it come and go.

Lady Teazle: I dare swear you have, ma’am; it goes off at night, and comes again in the morning.

Coincidences being what they are, the following reproduction of a Monica Lewinsky note to President Bill Clinton (REAL scandal) is in L.Q. after the Trollope piece. (p. 53) 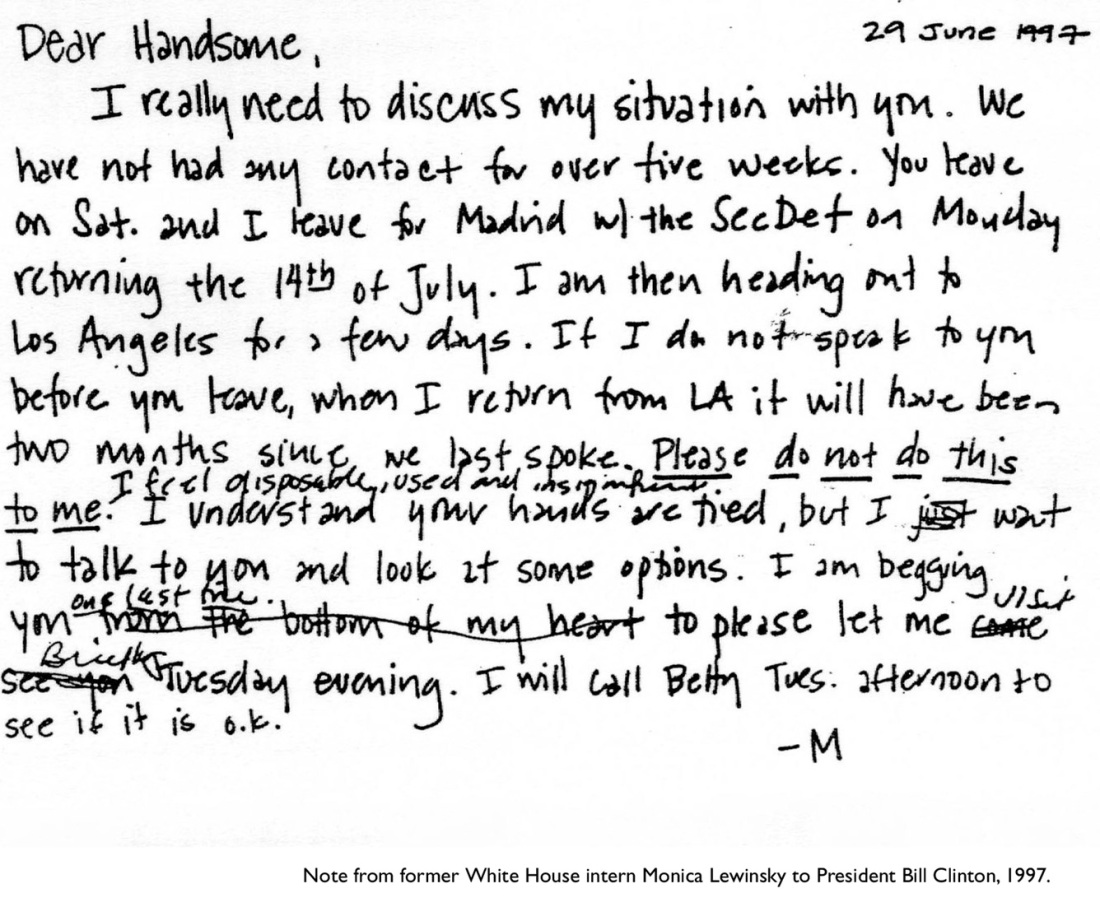 The coincidence is that Linda Tripp passed away this April 2020, after ‘a brief bout with pancreatic cancer.’

“Tripp is considered by some to be a whistleblower for her role in exposing Clinton’s affair with Lewinsky, then a White House intern during the Clinton administration. Upon befriending Lewinsky and learning about the affair, Tripp — out of “patriotic duty” — made secret recordings of her conversations with Lewinsky. Those recordings, given to then-Independent Counsel Kenneth Starr, ultimately aided in the impeachment of Clinton on perjury charge.” –Rolling Stone Magazine.

Scandal is where you find it, which often seems like EVERYWHERE.

“…envy is a powerful stimulus to the misanthropic mind, and merit is ever the mark at which it aims its most envenomed shafts.” (p. 54)

“Judith Sargent Murray, from The Traveler Returned. Born in Gloucester, Massachusetts, in 1751, Murray was a writer and an early advocate for women’s rights. Her essay “On the Equality of the Sexes” predates by a year Mary Wollstonecraft’s A Vindication of the Rights of Woman. In 1794 a new theater in Boston put out a call for plays by American writers. Murray, under a pseudonym implying male authorship, submitted The Medium, or Virtue Triumphant. It was produced a year later, the first work by an American to appear on a Boston stage.” (p. 54) OMG, free again. Very short. Such generosity. Subscriptions must be sky-rocketing during self-isolation/shelter-in-place/COVID-19.

Hazlitt (William, not Henry, a future collateral descendant, according to Wikipedia, and superb economics writer, author of Economics In One Lesson: “Chp. 1: THE ONE LESSON: “From this aspect, therefore, the whole of economics can be reduced to a single lesson, and that lesson can be reduced to a single sentence. The art of economics consists in looking not merely at the immediate but at the longer effects of any act or policy; it consist in tracing the consequences of that policy not merely for one group but for all groups.” (Subj. book, p. 17.)”) and Mark Twain are two of the remaining free extracts in Smoke. The Quarterly is not nearly so freely generous in Fire and Ash, and so far Fire is captivating.

I am not rambling, just being pretentious in my own right.

“There is nothing in which all the world agree but in running down some obnoxious individual.

…the universality of the outcry is often the only ground of the opinion, and that it is purposely raised upon this principle, that all other proof or evidence against the person meant to be run down is wanting.

For everyone in such circumstances keeps his own opinion to himself and only attends to or acts upon that which he conceives to be the opinion of everyone but himself.

I see a dozen or a score of my countrymen, with their faces fixed and their eyes glued to a newspaper, a magazine, a review—reading, swallowing, profoundly ruminating on the lie, the cant, the sophism of the day! Why? It saves them the trouble of thinking; it gratifies their ill humor… ” (p. 55-56) Touche’. 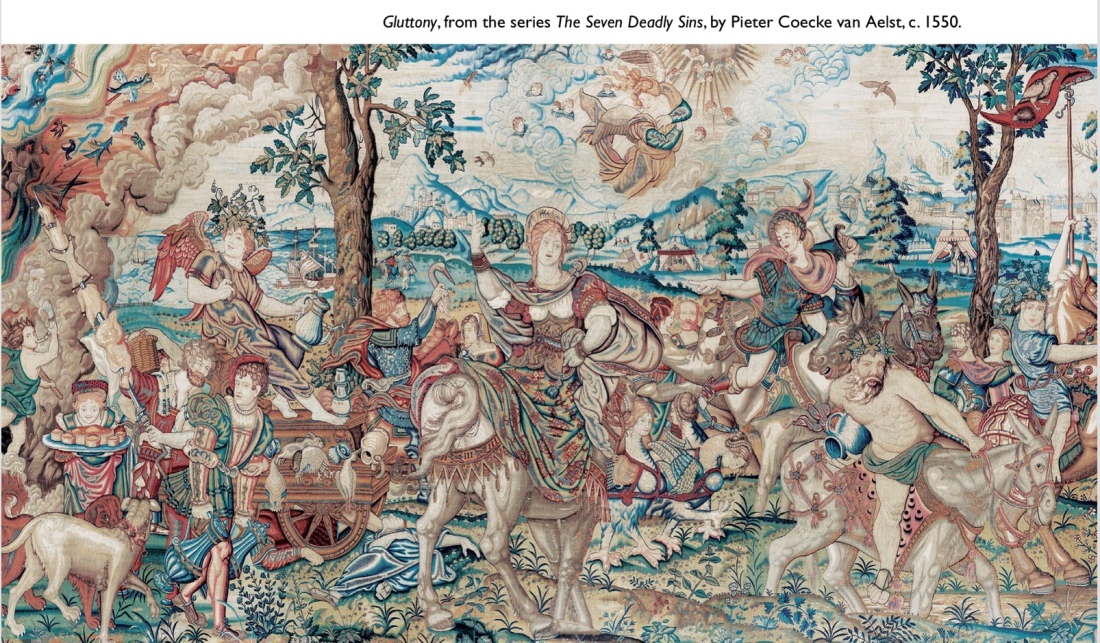 Evelyn Waugh has an extract from A Handful of Dust, about finding a woman with which to manufacture evidence of infidelity for a divorce. Notes the Author Notes:

““A Handful of Dust,” wrote the English author Rose Macaulay in 1946, “seems to reach the climax of Mr. Waugh’s view of life as the meaningless jigging of barbarous nitwits.”” (p. 63)

Side-quote: “Until you’ve lost your reputation, you never realize what a burden it was or what freedom really is.” —Margaret Mitchell, 1936 (p. 63)

Mark Twain, from License of the Press, writes with an acid-tipped pen:

“The press has scoffed at religion till it has made scoffing popular.

It seems to me that just in the ratio that our newspapers increase, our morals decay. The more newspapers, the worse morals.

It has become a sarcastic proverb that a thing must be true if you saw it in a newspaper.That is the opinion intelligent people have of that lying vehicle in a nutshell. But the trouble is that the stupid people—who constitute the grand overwhelming majority of this and all other nations—do believe and are molded and convinced by what they get out of a newspaper, and there is where the harm lies.

I have a sort of vague general idea that there is too much liberty of the press in this country, and that through the absence of all wholesome restraint, the newspaper has become in a large degree a national curse and will probably damn the republic yet.” (p. 64-65) Free.

But what does he really think?

Hazel D. Campbell has a funny piece about the escalation of scandal, starting with an anonymous classified in a newspaper:

This is to advise Erma to confess her indiscretions to her husband. He will forgive her if she tells all, but he is getting suspicious, and if he finds out for himself, trouble!” (p. 67)

The Ermas are soon running for their lives, each one thinking it’s about them. It’s written in Jamaican speech-dialect/calypso song style, making it real and even funnier. Not free. Pity.

That’s all for Smoke. Where there is Smoke there is Fire.