[CATEGORIES: Literature, Lapham’s Quarterly, Reading, Book Review]
[Click HERE to see my previous posts referencing Lapham’s Quarterly.]
[Some of LQ’s contents are available free.]
[L.Q. cover, quotes, and images from Lapham’s Quarterly Spring 2020: SCANDAL, except where noted.]
[Right-click on a photo may give the option to open it separately.]
[NEW to Lapham’s Quarterly? See the standard notes at the end of this review. After 45+ LQ summaries I jump right in.]

[This is a READING section, for those who may stumble in looking for photography. My summaries of Lapham’s Quarterly historical journal continue.]

There is an online Table Of Contents. Underlined items are a link to free material.  Inquiring minds may explore.

The Voices In Time sections this issue are Smoke, Fire, and Ash. After any whiff of scandal (Smoke) there is often a conflagration (Fire) which consumes and lays waste to all parties involved (Ash).

Somehow I have breezed through reading the third section of SCANDAL in fairly short time, captivated, perhaps, by the alluring titillation and voyeurism of others’ misfortunes. Such is the less complimentary side of some human natures.

ASH starts with a 2019 piece on ‘disgrace insurance’. A company called SpottedRisk is making the market:

“Later this summer Spotted plans to sell “disgrace insurance” to entertainment companies and commercial brands, making the risk of celebrity downfall as quantifiable and reimbursable as that of floods and car crashes.” (p. 134)

“But here is the controversial, incontrovertible fact of disgrace insurance: it is not a moral arbiter of behavior but a reflection of society’s tolerance of it.” (p. 137)

“The only celebrity anyone at Spotted declared essentially uninsurable was Kelly. [Musician R. Kelly, ‘…the subject of numerous allegations of sexual abuse and misconduct, often with underage girls…’] As for Donald Trump, Dearborn said, “he would probably trigger a claim every week,” simply by existing. “Some people are basically human triggers.”” (p. 138)

“Disgraceful events are increasing at an alarming rate and have never been so publicly visible — they can cripple your production, campaign, tour, team or company, both financially and reputationally.

SpottedRisk™ has completely reinvented the decades-old disgrace insurance product in order to meet the needs of today’s market.”

What will they think of next. You can be sure it will be something…

“A young man of the court was accused of being too passionately addicted to whores. There were a number of respectable and influential women present whose favor might have been lost to him through such an accusation, and one of his friends answered, “It’s an exaggera- tion! It’s slander! He has other women, too.”” (p. 139)

Prolific and celebrated author Edith Wharton (Pulitzer Prize for The Age of Innocence) has an amusing piece on back-biting scandal and slander. Nothing quotable, but it’s entertaining. Free online.

Contemporary crime novel writer James Ellroy (The Black Dahlia, L.A. Confidential) has an extract from L.A. Conf. His ‘Hush-Hush’ magazine mirrors scandal-sheet Confidential, itself an influencer of supermarket tabloids that now grace our shelves, such as National Enquirer. Fortunately, Ellroy’s writing style here does not yet descend to his later abbreviated, staccato, bullet points, such as in The Cold Six Thousand:

“The flight ran smooth. A stew served drinks. She saw his gun. She played up. She asked dumb questions.
He said he worked Vegas PD. He ran the intel squad. He built files and logged information.
She loved it. She swooned.
“Hon, what you doin’ in Dallas?”
He told her.
A Ne–o shivved a twenty-one dealer. The dealer lost an eye. The Ne–o booked to Big D. She loved it. She brought him highballs. He omitted details.” (Online sample.)

“People would rather swallow a lit candle
Than keep a secret that smacks in the least of scandal.
The quietest whisper in the royal hall
Is out in a flash buttonholing passersby against a wall;
And it’s not enough that it’s broadcast to the nation—
Everyone gets it with improvement and elaboration.” (p. 147)

I liked the 1872 U.S. Senate speech extract by Charles Sumner, deriding President Ulysses Grant for his nepotism and hoping to derail his reelection:

“In adopting him as a candidate for reelection, we undertake to vindicate his presidency and adopt in all things the insulting, incapable, aide-de-campish dictatorship which he has inaugurated.”

“And let it be added, that unconscious of all this misrule, he quarrels without cause even with political supporters, and on such a scale as to become the greatest presidential quarreler of our history, quarreling more than all other presidents together…”

“If he is stubborn, obstinate, and perverse, are not stubbornness, obstinacy, and perversity commended for imitation? If he insults and wrongs associates in official trust, who is safe from the malignant influence having its propulsion from the Executive Mansion?” (p. 148-150) Free online.

No parallels there. No one can see the future. I would love to look back on the present five hundred years from now.

Janet Flanner, a columnist for the New Yorker, covering Paris for nearly fifty years, has a very brief 1945 piece about the then-new crime of l’indignité nationale, national indignity, and its punishment, dégradation nationale, national degradation. Thank goodness we are above all that 75 years on.

William Blackstone, in 1768, expounds on slander and the law:

“Injuries affecting a man’s reputation or good name are, first, by malicious, scandalous, and slanderous words, tending to his damage and derogation.”

“Words spoken in derogation of a peer, a judge, or other great officer of the realm, which are called scandalum magnatum, are held to be still more heinous; and though they be such as would not be actionable in the case of a common person, yet when spoken in disgrace of such high and respectable characters, they amount to an atrocious injury…” (p. 155) Free online.

E.D. Morel writes a 1906 criticism of Belgian King Leopold and his use of the Belgian Congo for his personal profit and fiefdom.

In the author notes: “In 1908 Leopold was forced to relinquish control of the Congo to the Belgian government.” (p. 159) Free online.

Morel mentions: “Stanley came over to this country as his mouthpiece…”

Could this Stanley be he of the ‘Dr. Livingstone, I presume’ fame? I often think I don’t read enough outside of Lapham’s Quarterly, even though every issue exposes me to nearly 80 authors. However, I do embark on side research of thought-provoking topics or authors, as I did here with Henry Morton Stanley. His Wikipedia page is hugely informative and captivating. He is that Stanley. I need not presume.

Another diversion I undertook was in reference to this art reproduction on p. 155: 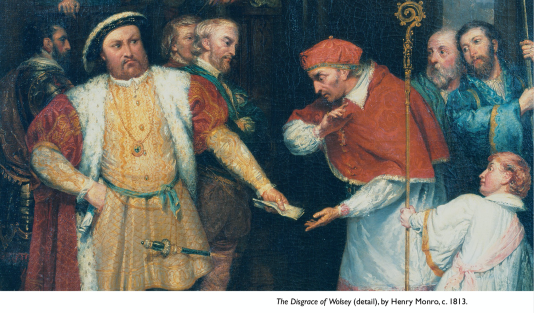 That looks like Henry VIII, but who is Wolsey and what was his disgrace? Off I go. Wikipedia (again) has an informative page on Cardinal Thomas Wolsey.

Anyone finding themselves in the service of the mercurial and promiscuous (only because he desired a male heir) Henry VIII, had their hands full. The disgrace appears to be Cardinal Wolsey’s failure to obtain annulment of Henry’s marriage to Catherine of Aragon, who gave him six children, of which only one female (Mary I) survived. Wolsey perhaps avoided a brutal death because, on his way to surrender to arrest in London, he died of natural causes. A study of Henry VIII and all his wives would take years, but Wiki informs on Hampton Court (a favorite palace of Henry’s, actually begun by Wolsey for himself), Catherine of A., and Anne Boleyn, to name a few. Six wives, three annulments, two wife beheadings, one mistress, that I know of. Wikipedia is the Cliff’s Notes of history.

Marguerite de Navarre pens a 1494 story from her Heptameron, about a young girl thought to be a virgin but found to be pregnant, and thus is hailed as a possible second Virgin Mary. Her elderly brother is the parish priest and offers her communion in exchange for the truth.

“Then the girl, who was aged sixteen, swore the following oath: “I take the body of our Lord present here, before you, messieurs, and before you, my brother, to my damnation if ever a man touched me any more than you.”” (p. 161)

There lies the rub. “…to my damnation if ever a man touched me any more than you.” The priestly brother did it. The courts wait for the baby to be born, then burn the brother and sister together.

“The local people were extremely shocked to discover such a hideous monstrosity under the cloak of sanctity, to discover, concealed behind such a holy and commendable life, vice that was so detestable.” (p. 155) This is the ASH section.

“And it is a scandalous thing to have so much appearance of guilt as to seem greatly concerned to clear one’s innocence; such lewd reproaches will die by themselves when they are let alone and despised, but they are revived and kept alive by much ado of answering and refuting.” (p. 167)

I almost missed it. Playwright Tennessee Williams has a noteworthy piece from Suddenly Last Summer:

“…before you hear whatever you’re going to hear from the girl when she gets here. My son, Sebastian, was chaste. Not c-h-a-s-e-d! Oh, he was chased in that way of spelling it, too, we had to be very fleet-footed, I can tell you, with his looks and his charm, to keep ahead of pur- suers, every kind of pursuer!—I mean he was c-h-a-s-t-e!—Chaste…” (p. 163)

Antal Szerb has an extract from his novel, commenting on pamphleteering to spread scandal in the time of Marie Antoinette. The novel is about the real-life Affair of the Diamond Necklace (thank you Wiki). Sadly, from the author notes:

“A Hungarian novelist and essayist, Szerb wrote this, his final novel, in 1943, one year before being deported to a concentration camp, where he died at the age of forty-three.” (p. 171)

Oscar Wilde writes, 1896, not of his usual insightful and punning wit, but of a clemency petition to be released from jail, where he was incarcerated for gross indecency. (Section 11 of the Criminal Law Amendment Act 1885 made “gross indecency” a crime in the United Kingdom. In practice, the law was used broadly to prosecute male homosexuals where actual sodomy could not be proven. –Wiki.) It is a sad lamentation. Free online.

Joaquim Maria Machado de Assis has a lengthy and amusing extract about a man who passes away and is mourned by the many friends who were mentored by him. One of them finds his diary, which reveals that he actually didn’t like most of them! On who is the joke?!

ASH is concluded. Further Remarks, with its three full essays and special endnote by Lewis Lapham, should bring SCANDAL to a close.